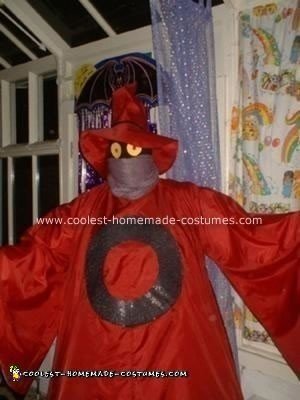 I wanted a costume that would be really cool and that I could hide under and just shake off if I was too hot. The Masters of the Universe Orco homemade costume was perfect!

I made it out of dress lining from a wizards pattern (worn back to front)in dark red lined in purple then appliqued a giant “O” on the front in sequin fabric.

I wore a black stocking over my head with eyes and a mouth hole cut out with cardboard eyes stuck over the holes to cover them and wore a fuzzy purple scarf to cover the mouth.

And finally a hat with black cord tied around it finished the outfit. I wore it over a hoop skirt which was pulled up high on my chest to give the appearance of floating like the character does in the cartoon. This was very effective and won the contest and I have lent it out several times since!

I think it cost me about £13 in materials to make.

Coolest Homemade He Man Master of the Universe Costume