My little boy has been a strong little guy since the day he was born, so I had nicknamed him “Heman”. My 4-yr old daughter wanted to know who that was, so we started watching old Heman and She-ra cartoons. She got stuck on the idea of being She-ra for Halloween and I couldn’t talk her out of it, though admittedly didn’t try very hard. It was only fitting to dress up her little brother as well. So began my venture into making Heman and She-ra costumes.

I tried using a few things to build the costumes from, but ended up making most of it from scratch. I bought some white satin and lining and a few different kinds of red fabric. I got just about everything at Joann’s. For the She-ra costume, I started with making the dress. I’m not a great seamstress, so it took a few attempts, but finally got one that fit.

I had to sew in some elastic and added some clear straps to hold it in place. I cut out pieces of gold craft foam for the emblem and headpiece. I glued the emblem to the dress, adding the blue jewel and glued the headpiece to an elastic gold headband, also adding a red jewel. I sewed on more pieces for the wings at the top of the dress. I traced the shape of a cape we already had on stretchy red velvet and cut that out and added lining. I used gold sticky back ribbon for the armbands, belt and collar of the cape.

The boots covers were almost impossible and the hardest part of all. I couldn’t find gold boots, nor even any gold fabric that would work. So, I bought some discounted silver vinyl and decided to spray paint it. After extensive research, I found a boot pattern online and modified it quite a bit to get the size and shape I needed. I sewed the pieces together and spray painted them. The first spray I bought didn’t stick at all. I got another kind that worked better but they weren’t “sparkly” enough, so I layered both sprays and also sprinkled gold glitter on them while they were wet. It was such a mess. We left a little princess power everywhere we went. I sewed some pieces of Velcro on the back seam to hold them in place. They didn’t fit perfectly, but they worked well enough for a costume. I found the sword for cheap at a Halloween store.

For Heman, I used a diaper pant (which is a cloth diaper cover that fastens in the back) and sewed some leftover fur fabric to the outside of it. I tried dyeing the fur red, but it wouldn’t take, so I used red fabric spray instead. I sewed on an orange ribbon for the belt and used scraps of the ribbon and Velcro for the wristbands. The chest plate was a bit difficult. I used grey craft foam and acrylic paint. I attached with grey ribbon with hot glue and duct tape, but wish I’d had more time to find a better way of securing it. He ripped off the first one while we were trick-or-treating before we had a chance to take pictures, so I had to make another one that fit even more awkwardly.

He also lost one of his fuzzy red boots, so I had to make a pair of those as well. Again, I found a pattern online and modified it, adding some of the leftover vinyl for the bottoms and fur to the tops. They were a bit too small but worked OK for a costume. I was lucky enough to find his sword for cheap at the same store as She-ra’s.

Then there’s Orko, my daughter’s trick-or-treat bag. I bought a black felt pail and a cardboard witch’s hat for $3 total. I used some of the red fabric to cover the hat using another modified sewing pattern and hot glue, and attached another scrap of the fabric to the pail with purple duct tape. We used yellow and blue felt for the eyes, hands and ears (my daughter cut those out) and hot glued those. I cut one end of the felt handle on the pail and stuck it through the brim of the hat, gluing it in place. That worked as a hinge for the hat to lift up and then I put velcro on the other side to hold it down in place. Then all that was left was a big “O”, which only required a Sharpie.

My son is just under a year old and not quite walking yet, so I knew I’d need to have him in the carrier. Who better to carry Heman around than Battlecat?! I bought a green fleece top and green sweatpants on sale at Old Navy. I cut stripes out of sticky back yellow felt and stuck those on in a hurry. They didn’t stick well, but I wanted to maintain the clothing items (since they were the most expensive of the costume pieces) so refrained from doing anything permanent.  I sewed myself a red hat, stuffing it for some shape (again, using a modified hat pattern found online), and made a red felt mask with yellow foam attached to the inside for the eyes.

I quickly sewed a tail out of closely matching green fleece and stuffed it with another piece of fur to give it some bulk. I stuck it to the back of my pants with loosely sewed on Velcro  which I easily removed after Halloween. The last step was making a red slip cover for the carrier out of some of the red fabric. I just traced the shape of my carrier onto 2 pieces of fabric and sewed along the edges, leaving gaps to pull the straps through.

I bought Dad’s Skeletor costume last-minute, as he usually doesn’t dress up with us; he only wore it for pictures. Can’t take any credit for that one. 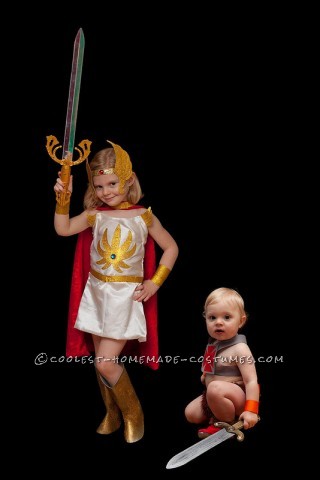 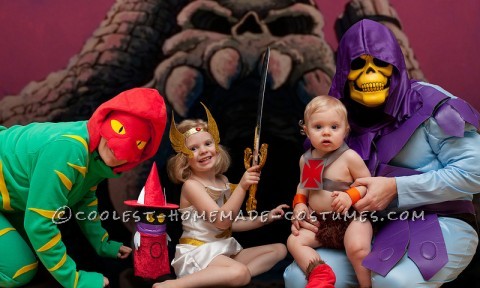