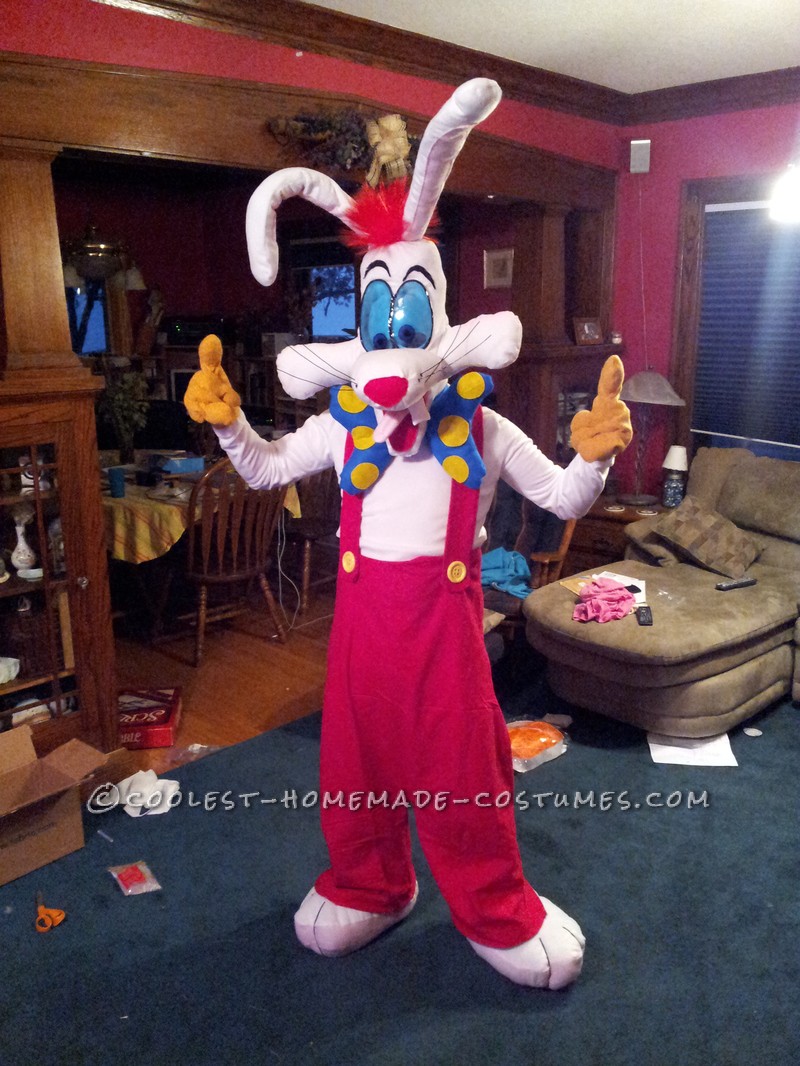 Here is My Epic Roger Rabbit Halloween costume!  Hope You all enjoy it as much as I did making it and showing it off!!

Things you will Need!!! or at least what i used!!

Number 1 and most important!  A creative mind!  you will need this!
2. Sewing machine. Needles and pins!!
3. about 3 yards of faux white fur
4. depending on how tall you are 2-4 yards of red denim fabric for the pants.
5. small piece of blue denim.
6. a yard of pink fabric.
7. some black yarn
8. clear curved plastic.
9. half a yard of blue felt
10. half yard of red felt
11. 1/8 yard of yellow felt
12. some black paint
13. some black jewelry wire.
14. small piece of black fabric for the eye brows
15. lots and lots of hot glue!
16. an orange/red wig for the tuff of hair on the top of the head!
17. red,white, and blue thread!
18. yard of goldish yellow fleece for the hands.
19. some metal coat hangers! and some wire for the bottom of the overalls!
20. Lastly! I must reiterate you need to be creative!! :D:D just have fun!! 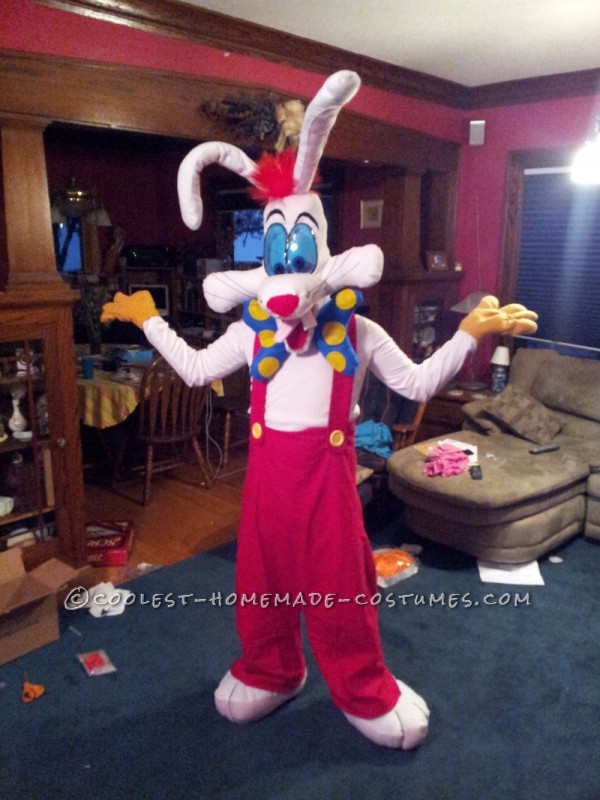 Started with the Overalls:

To start with the overalls I took some red denim fabric and cut it out so it was a little longer than from my stomach to the floor so I had room for hemming the edges and rolling up the bottom. I cut them out in sort of a weird shape to give them the flare at the boom and skinny at the top. Cut a slit up the middle of the bottom for the legs but make sure it’s not to high up or it will look funny. I rolled the bottoms up about an inch or so and sewed it. Then left a little spot open to slide a wire in to give the bottoms a flare around the feet.

To make the overall straps I just folded a long price of fabric and sewed it all the way down on both sides and rolled it inside out to hit the seams. Make them long enough to hold your pants about mid stomach high and leave about 2″ for a button to sew them to the pants. Find yourself 4 big yellow buttons and sew em on!! I literally had to order some from the UK cuz I couldn’t find any that U liked or were big enough anywhere!! You could also make your own but that sounds like a pain! haha

As for the butt patch and tail I made from some blue denim fabric and cut out a rectangle. Then I cut a slit in the middle for the tail. Make the tail out of whatever you want. I used a oval shape of the same fur I’m using for the rest of the costume. I scrunched it up and put put some fluff in it and sewed it up. Then sewed in into the butt patch. Then sewed the patch to the butt of the overalls. For added effect add two little strips on each side like you see in the picture.

Now you have a awesome pair of Roger Rabbit overalls and can move on! 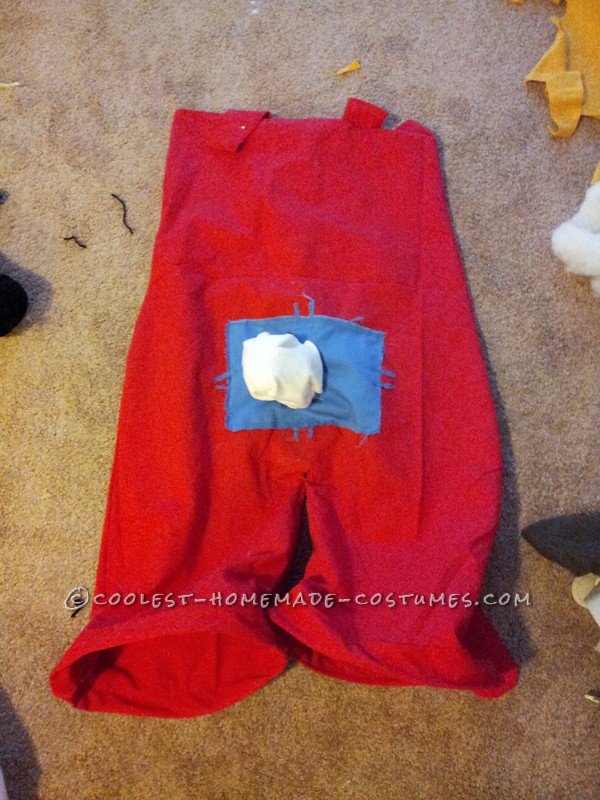 For the shirt I just used some fake fur or faux fur as its called and sewed a shirt out of it. You can find patterns for shirts at Joann fabrics or probably any fabric store. My mom had one so I just used that! Not too complicated, it was my first shirt I’ve ever made and it turned out pretty good!! You want it somewhat form fitting but not so tight you cant get it on! lol, I’m a smaller guy so I can pull off the skinny Roger Rabbit pretty good!

I also made a small strip of fabric and sewed some Velcro to it for the neck instead of making the shirt a turtle neck or in the case a rabbit neck! haha 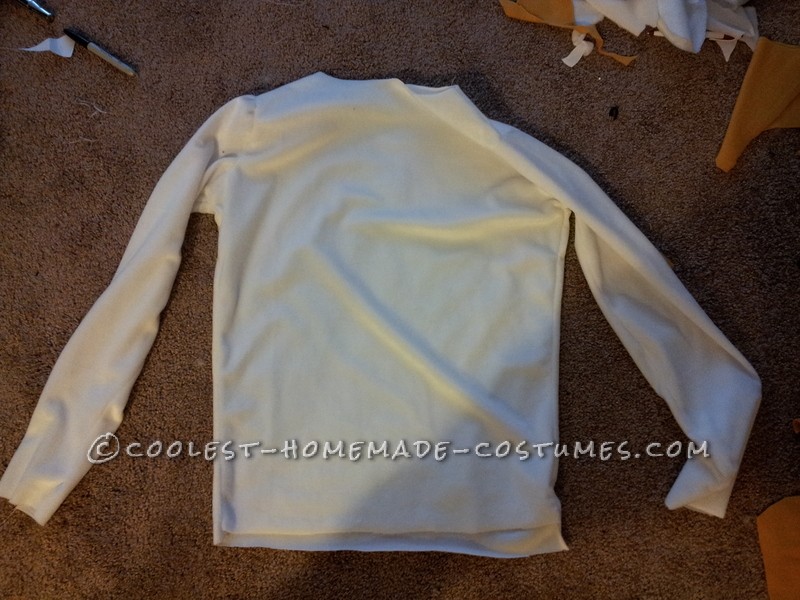 Now for some Big Rabbit feet!!

For the feet you can do a few different things…I chose to make them from scratch but if you cant you can find big fluffle rabbit feet online. I started with a big oval piece of faux fur and cut two knotches in the front for the toes. These steps obviously will all be times two so you can make your other foot…I made them one by one and they turned out pretty good but to make them perfectly even I would just cut out two of each piece!

For the side wall I just cut a long strip of pink fabric about 2 inches wide and sewed it to the edge of the top of the foot. Then make an oval of the pink fabric for the bottom! Sew it all up and I added a strip of fur at the top where your foot goes in just for giggles. Then filled with fluff and I bought slippers and put those inside so its more comfy and your not walking in socks all night! Then I took some black yarn and threaded it though the front for the toes!! 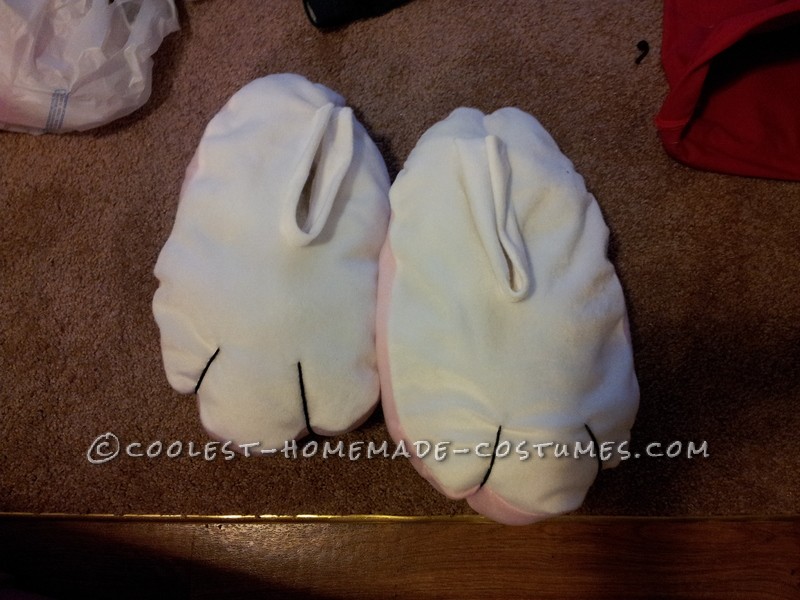 The Bow and hands!

For the bow I just took some bright blue and yellow felt, cut out two bow shapes out of the blue, sewed it together, filled it with fluff and wrapped a small strip a few times around in the middle. Then used a small strip with Velcro on each end as the strap for around my neck. Then cut out 7 small different shaped circles and hot glued them on!

As for the hands I just cut out some four finger glove shapes out of yellowish gold fleece and sewed them together, flipped them inside out to hide the seams and filled the ends with fluff. Then top finish them off painted three black stripes on the top of each hand! 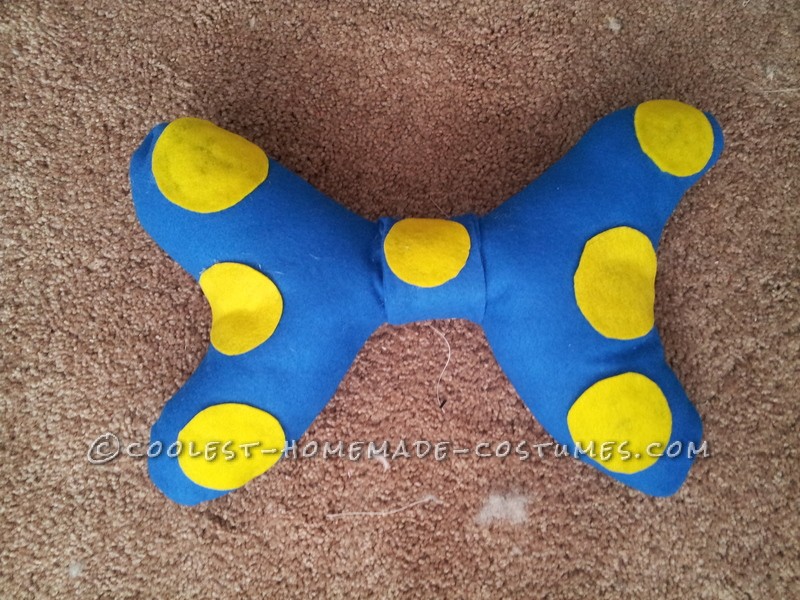 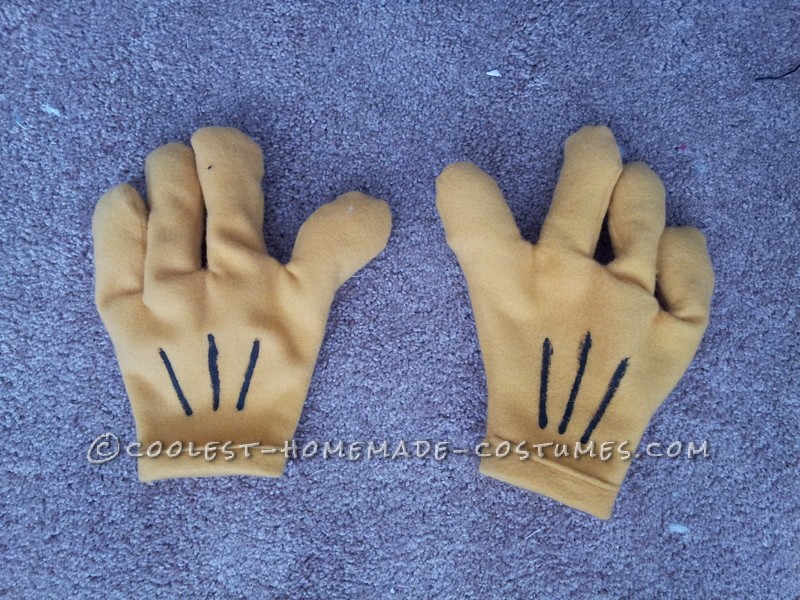 Lastly and certainly not least! The Head!

This is where you really have to get creative and hope your good at designing and cutting a sewing and being all around creative!! iI don’t wanna give out all my secrets but if you want help just ask!!

To start I cut out the basic shape of the head. Sewed it up. Cut a slit in the back for where your head goes in and flipped it inside out! Fill it with fluff and make sure it looks like the shape you want! Then add the nose. I cut a round piece and sewed it to the middle of the head. Cut one slit sideways and sew it from the back to make it seamless. Fill with fluff and make sure it looks good!

Now here’s where you really gotta be creative….making the mouth and tongue.  I sewed on some pieces to the front and added a tongue and at the same for the red nose! I used red felt and some of the pink fabric for the tongue! And sewed it on! Don’t forget to add a big white tooth! I just took some of the fur and sewed it inside out so the inside faced out to look like a tooth and sewed in to the head!

Add some whiskers. I used some black jewelry wire and put a piece of hard foam inside the nose to hold the wires.

For the eyes you can use any sort of curved plastic. I used some from a set of headlights I got at my work. I work at an Autobody shop so they were being replaced. I tinted some clear a hint of blue…seam sealed the edges and airbrushed some crazy crooked eyes!! Then I glued them to the front and cut out the fabric so I can see out the eyes!

Lastly the ears! I sewed big ears out of the faux fur…sewed a piece of the pink fabric I used for the feet in the middle of them! Unfolded some coat hangers to make the ears stand up and filled them with more fluff!! As for attaching them to the head it was rather complicated!! so be creative! I used more thick foam…the pink stuff for insulation found at your local Menards or home depot!

Fill the cheeks, top of the head and mouth with fluff and try it on, if you need to make adjustments which I’m sure you will, I did numerous time!! It’s easiest to take out the fluff, make your adjustments and refill….repeat until your head looks like how you want!

Find a cheap orangeish red wig and cut out a piece for the tuff of hair on the top of the head. I cut a slit in the top and hot glued it into the head!! Now you should have yourself a Roger Rabbit head! 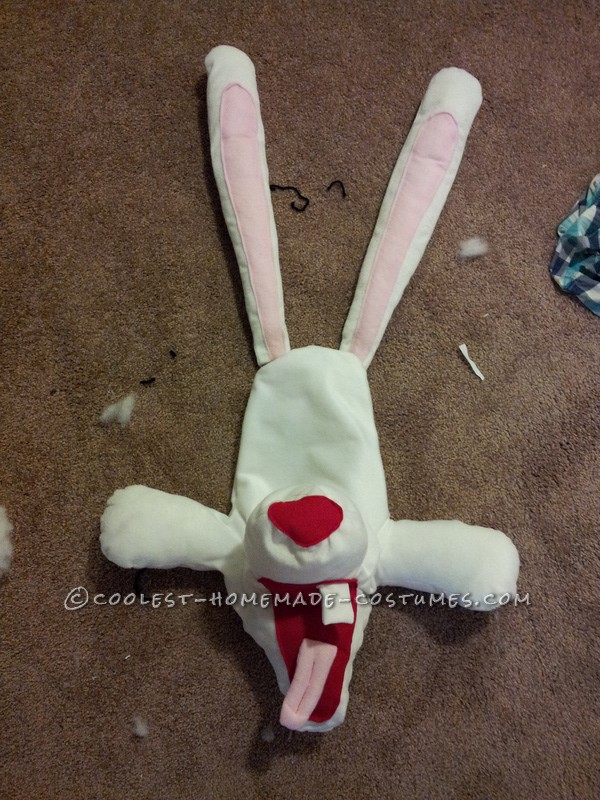 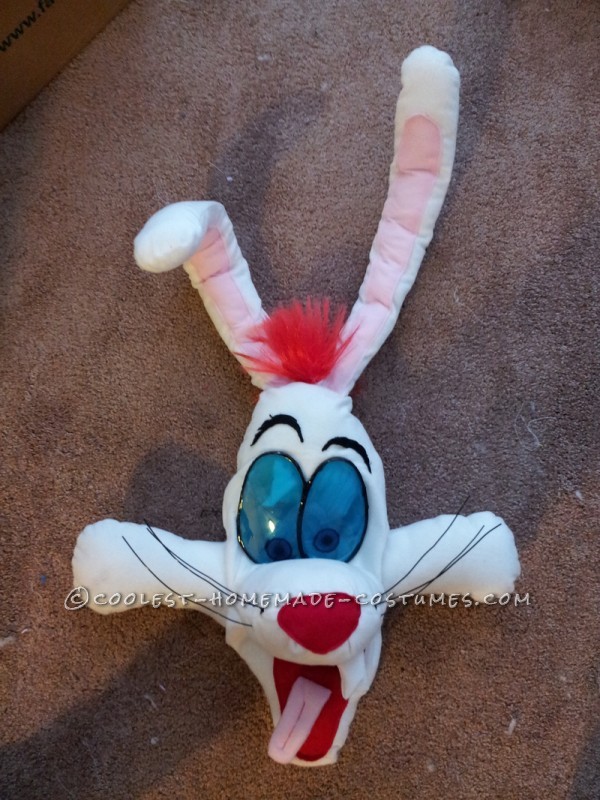 Heres my finished Product after its all done!!! Not much else to say but Be creative and have fun!!!! Go act silly and find yourself a smokin hott Jessica Rabbit to be your date!!! 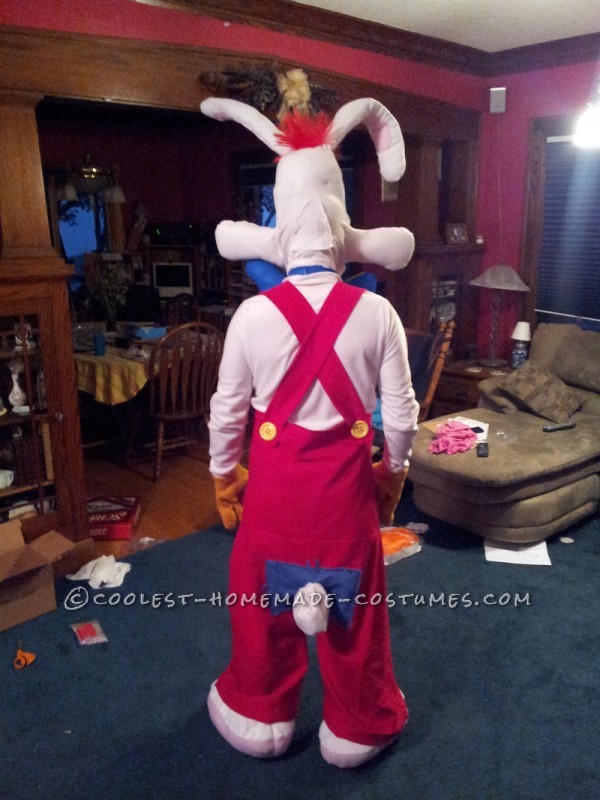 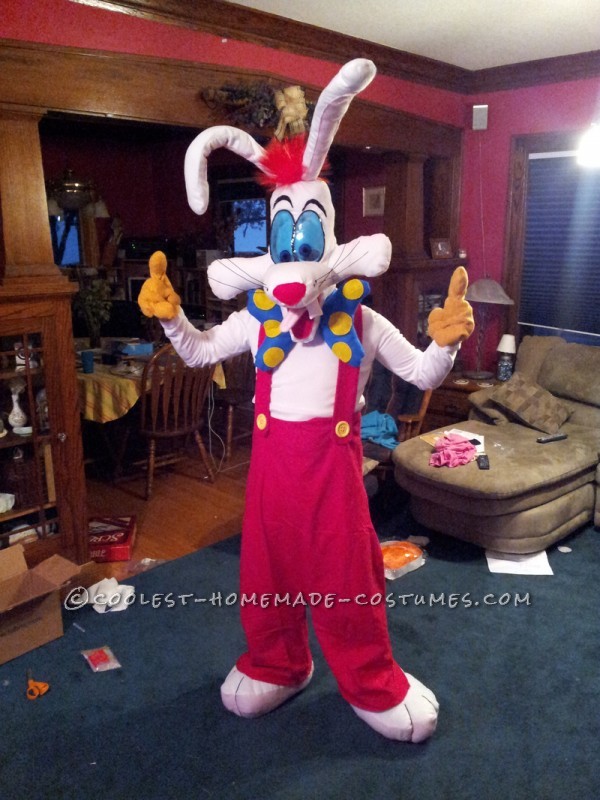