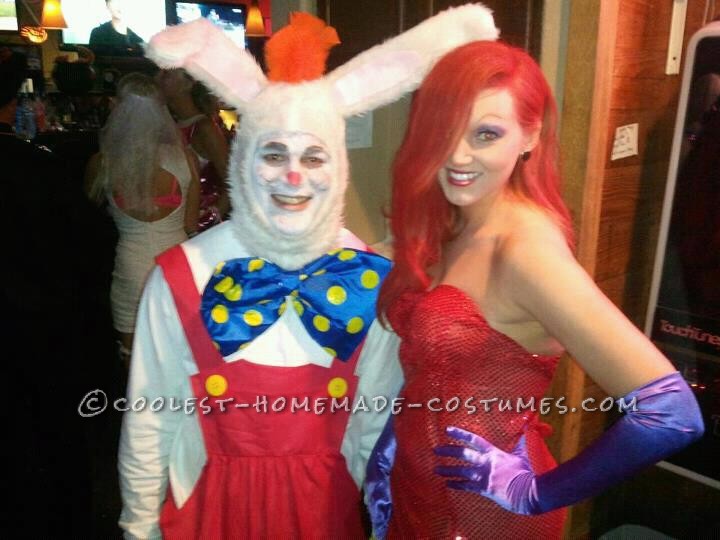 Although the movie Who Framed Roger Rabbit came out the year I was born, 1988, it had always been a classic in my home while growing up. I had been set on this costume for years, but couldn’t find a Roger to showcase the lovely bunny years…well until this year. I convinced my ever-so-sweet boyfriend to dress up like Roger so I could be Jessica.

The Who Framed Roger Rabbit Couple Halloween Costume is completely homemade and took a lot of “outside the box” thinking.

Roger: I sewed the head piece out of furry fabric and used plastic to keep the ears standing up. The pink on the ears is simply pink felt cut outs. The orange hair are feathers glued together and then glued down to the top of the head piece.

He wore a plain long sleeve white shirt, the easiest part of the costume, and yellow work gloves. The gloves had some kind of advertising on the top of them, but I insisted that he scrape it off because Roger did not have anything on his gloves! It was impossible to find blue fabric with yellow dots, so I took blue fabric with white dots and used yellow puff paint to cover up the white. The bow turned out perfect!

Now, the red pants were tricky, not because they were some crazy design, but because my idea of buying white overalls and dying them red was too pricey. I searched Home Depo, Ebay, Walmart, ect., but the cheapest pair I could find were $40… so on to option B. Option B was to make some out of red fabric, but time was running out before our big Halloween party. A quick trip to Goodwin and viola! I found a large red graduation gown and somehow I knew it would make perfect pants! And it did! I added a couple big yellow buttons to finish the look!

And to complete Mr. Roger, I made shoe covers & a puffy tail out of the left over furry fabric and painted his face (not the best, but I’m no makeup artist).

Jessica: Overall, my costume was a bit easier, but defiantly called for some of that “outside the box” thinking. The dress was a simple tube pattern sewn together to about the hip, that’s where the slit started.

Now, besides Jessica’s famous red hair swooped over her eyes, what’s the next most memorable part about her character…boobs. Now I’m not complaining with what I got, but I was defiantly in need of more. I found a hollow round globe thing that came in halves. Perfect! After situating them where I wanted, I used spray adhesive to attach the dress directly to them. It gave them the really round plumpsious look. And Jessica was curvy so out of a foam piece I created nice little bubble butt.

The last step was the hair and makeup. The makeup was simple, excess amount of purple eye shadow and some ruby red lipstick. And I have red hair, but not quit Jessica red. So 3 bottles of red spray and a lot of curling iron action, I was complete!

Well that’s how I created our Who Framed Roger Rabbit costumes! We took part in a costume contest last Saturday and had a blast, but sadly lost to Beaker. Hope this is our second chance at a prize.

THANK YOU FOR YOUR TIME! 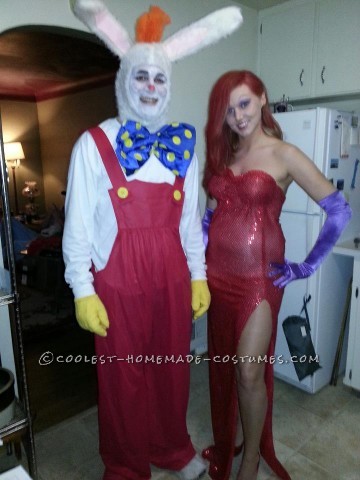 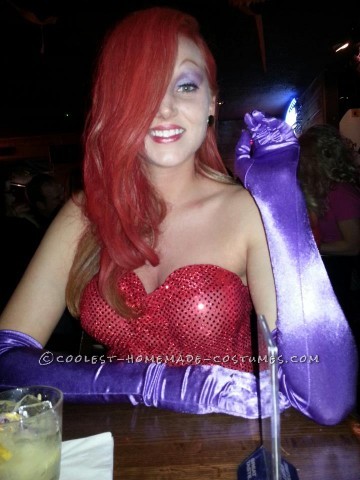