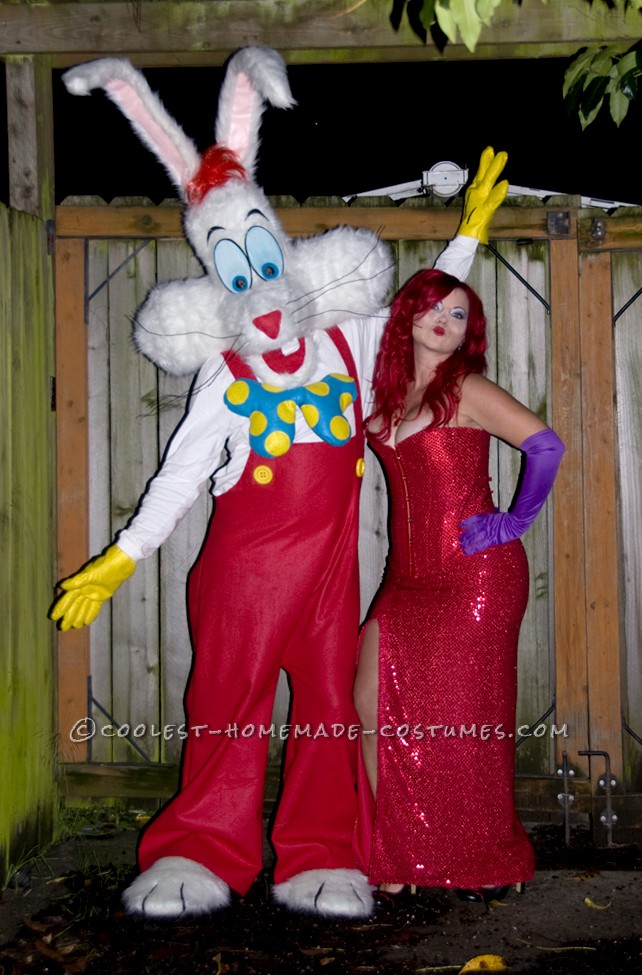 I’ve been told by friends before that I would make a perfect Jessica Rabbit, so this year I decided to go with it, but who is Jessica without her Roger Rabbit! Halloween is by far my favorite day of the year, and I always go all out on my costumes, although this year my husband Marty was wearing my masterpiece! Don’t get me wrong, everyone still loved Jessica, but I think it may have been for my boobs more than my costume, ha ha! Everything on both of our costumes was completely handmade from Jessica’s dress to Roger’s outfit and head (except for Jessica’s purple gloves, and Roger’s white shirt) and probably took around 50 hours to complete.

The head was by far the most difficult part. There were several moments of “I don’t know how I’m going to make this work” but with enough time and trial and error it started coming together better than I could have imagined. This was my first attempt at making a large 3-dimensional cartoon head. But finding the right materials, and my favorite costume making tool – a hot glue gun, I was on a roll!

We had a blast in these costumes, and were being stopped all night to take pictures. No one believed that the Roger Rabbit head was handmade! What drunk adult doesn’t love running into one of their favorite childhood cartoon characters? We got to play the role, Marty had his “please!” down, and several times I got asked “what do you see in that guy?” and I got to respond with “he makes me laugh.”  We couldn’t have had more fun playing out these parts and seeing how excited everyone was to see us. We literally had people yelling at us “Roger Rabbit WAIT”, and chasing us down to get a photo!

My favorite part of making an elaborate costume is the reactions I get from everyone while we are out. My favorite part of the Roger Rabbit costume was watching him drink. There is a hole cut in the mouth part so he can easily breathe and drink – but he had to drink beer from a straw and basically put the entire beer up the mouth so he could get the straw to his lips, it looked like he was just eating the beer every time he took a drink, ha ha!

The Outfit for Roger Rabbit

The gloves I just drew out an oversize glove pattern, cut two pieces of yellow felt out in the same shape, and sewed them up together to create a glove.  I then put small black felt cartoon accents on the tops of the hands.

I made cuffs for the feet.  These were made out of pieces of foam with the fur fabric glued over it.  I then put small black felt strips to accent the toes.  An elastic piece on the bottom fit snug over the shoes so it made it easy to walk, and they didn’t end up getting too dirty.

The bow tie I cut out two large bow shapes from felt, and sewed them together, leaving a hole to stuff it with stuffing for some dimension.  I cut out yellow circles from felt and glued them on.  We decided to attach the bow tie to the bottom of the mouth so it stayed in place easier.

The head was definitely the most challenging part of the costume, and it took a lot of trial and error to get it right! I started with sheets of foam, I used three separate sections to make up the head – which you can see in the photo before I attached the fur.

I started with the cheeks first – which I basically made a cylinder of foam I glued together, and 1/2 round flower arranging foam were the rounded parts on the end. I cut a hole in the top for the top section of the head to sit down in, and a hole in the bottom for Marty to be able to put it on. I used the same 1/2 circle flower foam for the rounded top of the head cylinder. A third cylinder was made for the nose, as well as another floral foam piece to help  round it out.

I attached fake fur onto the entire head by glueing it over the foam. After the head started taking shape, I made a mouth flap that basically just hangs down, and is attached to the head.  A hole was cut in the bottom of the nose to make it easier to breathe, and drink of course!

The eyes were made with rounded pieces of glass that I tinted blue, and circles of felt were cut and glued to the head underneath – with holes cut in the head at the center of the eyes to see through.

The ears are a strip of foam, with coat hanger wire underneath the fur to keep their shape.  Pink felt is glued to the inside of the ears.

A bit of red hair from a wig was used for his hair, a felt tooth, nose, eyebrows, and mouth details along with pieces of wire for the whiskers to finish it off.  We had to be careful with those whiskers though, they were dangerous throughout the night!

Jessica Rabbit was quite a bit easier for me to recreate. I started with a red corset that I hand sewed sequined fabric onto. I made the skirt from scratch, through a trial and error of sewing it to fit my body, and get that high slit in there. I did buy the purple gloves that went perfectly with the costume. Of course I already had the red hair, so I just had to part it to the side, put on some purple eyeshadow, and get the puckery cartoon lips drawn on with lipstick. 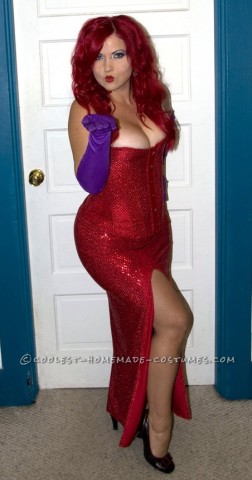 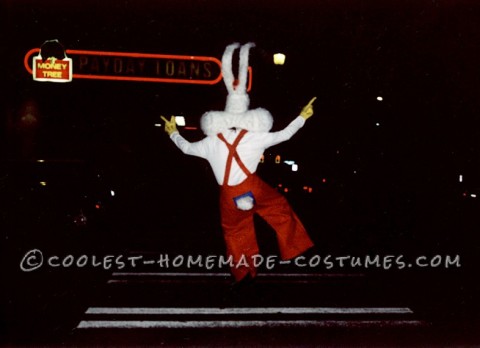 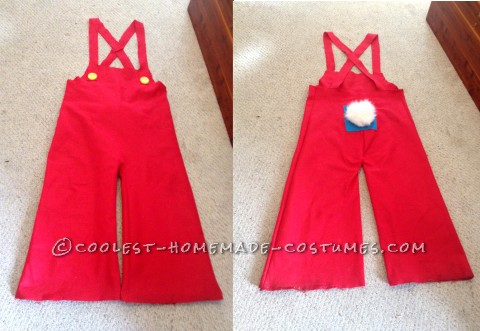 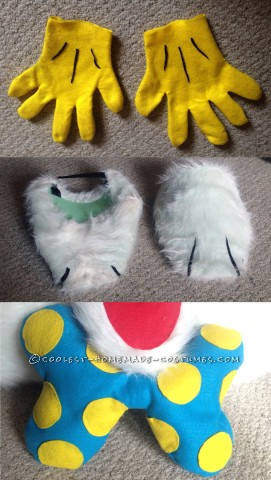 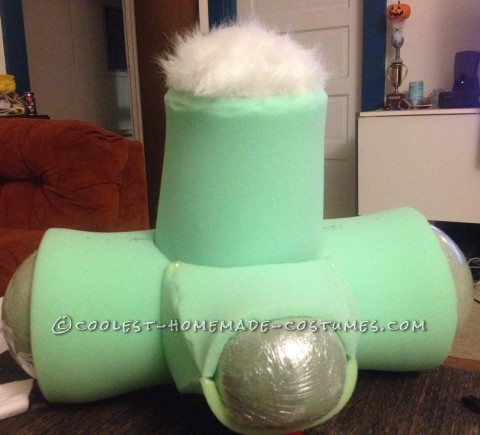 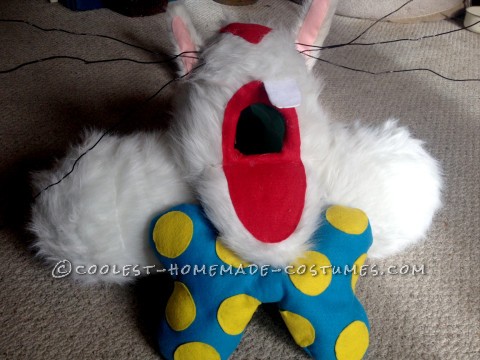 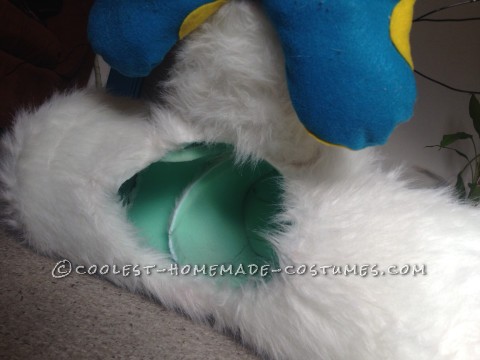 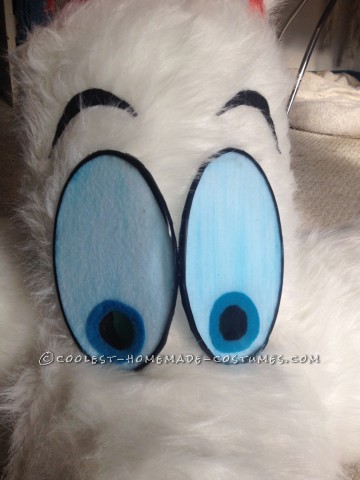 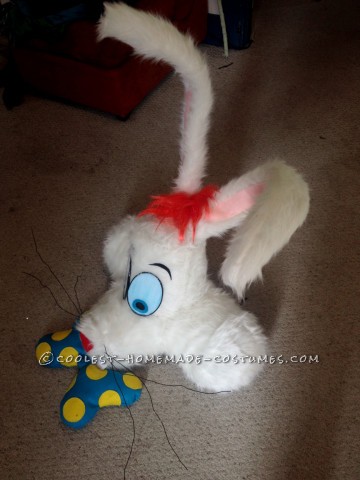