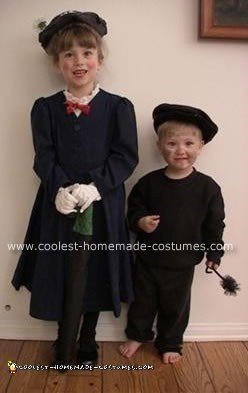 I found a cheap straw hat and died it black. When I died it the hat kind of shrunk and the brim sort of ruffled and it looked perfect! Then I attached plastic daisies and cherries I found at a fabric store.

For the umbrella I took green felt, folded in half so it would cover the umbrella handle, and then I drew a parrot’s head on both sides and then glued it on with hot glue. We finished Mary off with the white gloves we had in her dress-up box and applied the rosy cheeks.

I bought Bert the chimney sweep’s black sweats at Walmart and I found the hat at Goodwill and dyed it black. I then spray-painted a bottle brush for his chimney sweep and ashed up his cheeks.

These costumes were great because everyone, young and old, identified them because the movie is such a classic.