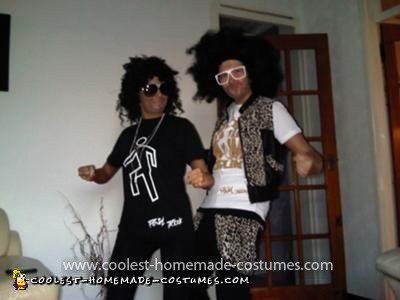 I had a fancy dress work night out coming up, and I wanted to go all out and come up with something they wouldn’t forget. the LMFAO song “everyday I’m sufflin” had just been released and I loved the Leo print costume Red Foo was wearing, so I asked my mate Linzi if she would join me in dressing up in a Homemade LMFAO Couple Costumes. I assured her she wouldn’t have to make anything as I was up for making both costumes.

I used a leather waistcoat as the base of the Red Foo costume, got some Leo print material from the local haberdashery, and stitched it on. He has one of his jackets attatched with a zip, so I cut off the arm of one of my hoody’s, and used the zip from that hoody to stitch onto the waist coat. So now the are zipped on and off.

The t shirts were made by cutting out stencils which I made from card and spray painting gold and white spray onto the t shirts. The white spray didn’t work that well so when it dried I used tip-ex to go over the outlines.

The glasses were from my work (new look) and they just happened to look exactly like the ones in the video, but they were black, so I just painted them white. But you can order them off LMFAO’s merchandise website, along with the t shirts.

The wigs were from my local fancy dress shop, but I had to use hair clips to keep my wig on because it was so big! I’m usually as white as a ghost so I had to put dark fake tan on to get my skin a darker color. The trousers were just black skinny jeans which I stitched Leo print fabric onto. And the shoes were just slip ons I drew ‘party rock’ onto.

The whole costume only came to around £20 as I had the clothes originally. I just needed to customize them with paint and fabrics. If you have and questions post them here and I’ll answer. 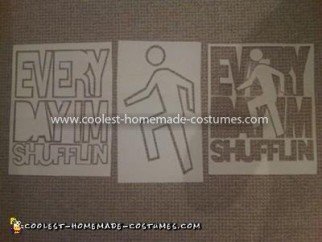 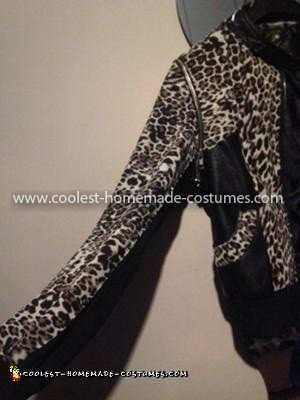 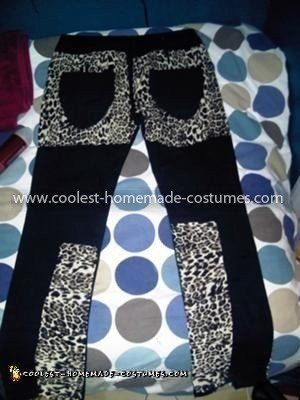