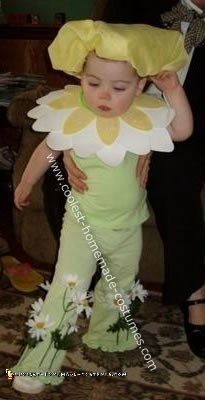 I originally made this little Daisy costume for a birthday party but it was such a hit that I had planned to use it again for Halloween. The theme for the party was based on Alice in Wonderland and the singing daisy’s are one of the lesser known characters in the book so to be original that is the one I choose.

Neck piece: I am not a sewer so I try to do things with a glue gun if at all possible. I took a flower head band that I had found at the dollar tree and decided to use it as a neck piece. The outfit was going to be worn by an 18 month old so a head piece would not be kept on. I took 2mm thick white foam sheets and cut them into pedal shapes almost three times larger than the petals on the headband. Then I hot glued the white petals in between the daisy petals on the head band and then again in between the petals I had just glued on. This made a fuller daisy.

The petals overlapped at the opening of the band but my daughter was still able to remove it to easy so I safety pinned two petals together on the underside which stopped her from removing it but I was easily able to take it off.

Body: I purchased a green shirt and green pants at a discount store and purchased daisies in bunches at the dollar tree. I took the daisies and cut them into single flowers. I then hot glued the heads of the flowers onto the stems and the leaves onto the base of the stem so my little girl would not pull them off when she discovered them.

I then took the daisies and placed them on the bottom of the pants the way I wanted it to look and then hot glued the stem and the daisy and the leaves (that way she wouldn’t be able to pull any of the flower off of the pants) all the way around the leg. However I did not put it on the inside of the legs as I thought it would make it uncomfortable to walk. I didn’t do anything to the shirt but put it on her.

Head: I purchased a yard of light yellow fabric and elastic. I cut out about a quarter of the fabric (fit to the head that will be wearing it and almost double the material)and layed it out, then I took the elastic and fit it to the size I needed on my child’s head. I then layed that in a circle on the fabric and pulled pieces of the fabric over the elastic and hot glued it to the other side of the fabric. I did this all the way around. Do not glue the fabric to the elastic, you will not be able to get it to bunch up which makes it poofier and cuter. You probably could just go and buy a shower cap and get the same effect but I thought this was so much cuter.

The outfit was awesome as my oldest put it.
My eldest went as the queen of hearts and I went as the hole that Alice jumps into but that is a different costume all altogether. 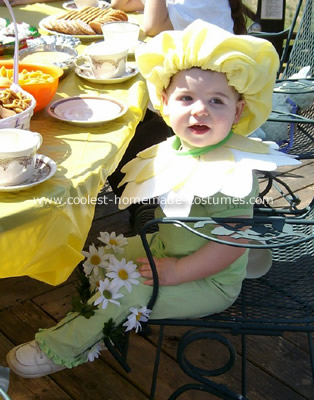