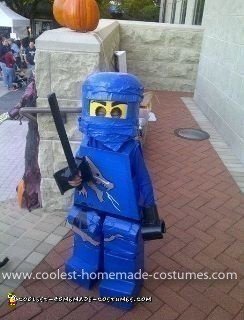 When my son told me he wanted to be Lego Ninjago, I knew I had to start brainstorming. Thanks to this site and other online resources, I was able to take ideas here and there to make his Homemade Lego Minifigure Ninjago Costume. He entered a local contest with this costume and won first place for his age category this year.

The Ninjago costume was made with mainly Dollar store items with the exception of duct tape and Velcro.

I then cut an opening on the bottom of the laundry basket to fit his head in. Afterward, I duct tape the whole thing inside and out with blue duct tape. Then I cut and opening for the yellow part of the face. Eyeing the actual toy and trying to get as proportional as I could. I used a poster board and cut it a little larger than the opening. Taped it with yellow duct tape and then cut two black circles for the eye with black duct tape.

Afterwards I cut the eyes out and made sure to leave some black to outline the eyes. I also added the eyebrows to it at the same time. I did not want to cover up the eyes with netting, just to allow more air in and make it easier for him to see. Then tape the yellow part to the head piece from the inside. I also cushioned the inside of the head piece with foam to level it where his eyes would be and also stabilized with a strap made of duct tape and added Velcro.

Then I made Duct Tape fabric and bunched it up and attached to the top of the head and also bottom of the head to made it look like a ninja head cover on him.

For the body, again trying to eye the proportions, I used foam core and duct tape. The dragon was also put on by using duct tape and cutting out the pattern for it. The leg was also mainly made of foam core and I also made sure to make the top part of the leg and bottom part of the leg so that it could bend when he walked. I placed a middle zone between the two parts that consisted only of duct tape fabric (about 6 inches). Once the two parts come together just fold the duct tape fabric so that two parts meet. That allows for flexibility.

I also added duct tape suspenders to the legs to stabilize it for when he walks. I decided not to do the arms for ease of movement, so I found a blue shirt that was as close to the color as I could. The Lego hands were made of 4 beer can coolers. The wrist part I cut and retaped to fit his wrist, being sure to leave enough room so he can slip his hands through. The claw part was done by cutting it in half and leaving it as is. I then inserted the wrist part into the claw part by cutting a hole to fit.

My son really enjoyed this costume and I enjoyed making it. It took about 3 weeks to finish, but it was usually maybe about a few hours here and there after work and on weekends. 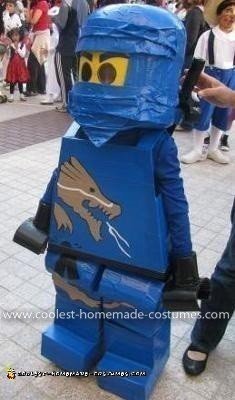