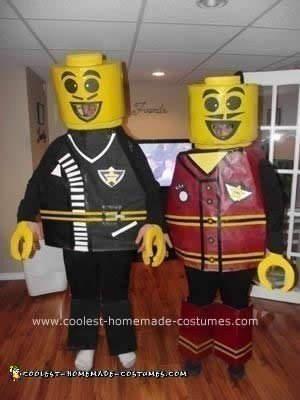 Inspired by the previous Lego minifigures group, we HAD to make our own Homemade Lego Couple DIY Costume! All together, the costumes were created in under a week, using a glue gun, cardboard, tape, spray paint, foam and poster board.

For the head, we didn’t find any measurements, so we traced a frying pan cover onto a sheet of foam, and braced it with duct tape, then we covered it with a sheet of poster board. We duct taped everything, and then covered it in brown wrapping paper. We used krylon spray paint to cover it. For he necks, we traced a larger pot cover, reinforced it with hockey tape, then painted.

For the decorations on the body, we mostly used color tape. We printed off a Lego logo, and taped to the back using double sided tape. The fireman used electrical (black) tape, we cut a walkie talkie and a badge out of poster board, and used yellow duct tape to make the stripes. The police used a yellow duct tape belt, white poster board for the zipper, and a posterboard badge and collar. The face was made of poster board, which we used a glue gun to attach, and fishnets for the mouth.

We went entirely by the pictures, not measuring anything. A week of cutting, taping, covering, gluing, and spray painting later, our costumes are done. We decided to be a Lego police man, and a Lego fireman. We did end up getting a honorary prize at a local Halloween contest. 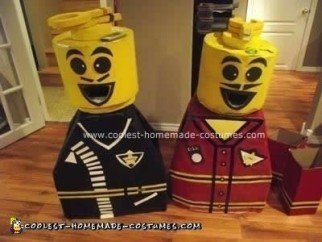 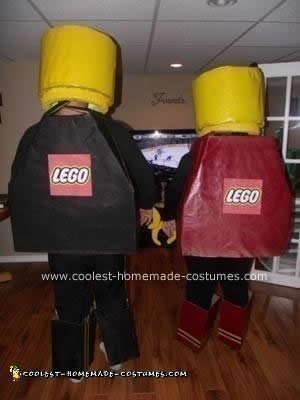 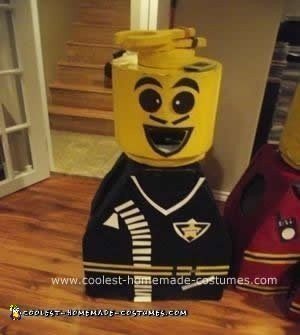