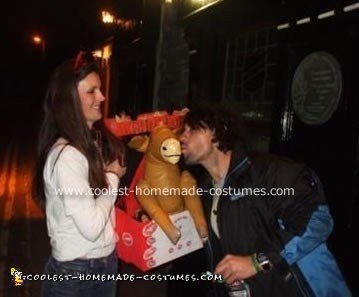 My kissing booth costume came about after a few nasty rumors went around about my husband and myself (all untrue!). I was thinking to myself, “Those people can all kiss my ass!” Then I remembered seeing a kissing booth costume right here on your website and a light bulb went off – I had my idea! I also thought of a way to use this idea for a good cause – my 8 year old daughter, Hailey, was diagnosed with type 1 diabetes in February, so I contacted the Diabetes Federation of Ireland and told them I had an idea that I might be able to use as a fundraiser. They said “Great!”

After about 2 weeks of juggling the idea around in my head and inspecting boxes around the house (even removing items from many!), I found the perfect two that fit together. Standing the shallow, topless one up, I inserted the smaller one into this and taped the two together. I then used a paper mache method (1 part glue, 2 parts water) to hide any tape and make the ‘booth’ smooth for painting.

Hailey and I decorated it with lip pictures printed from the internet, feathers and stickers, and used some old decorative cardboard to cut out the letters to spell ‘kissing booth.’ I was lucky as the tall box already had an opening at the top, which I put a belt through and was able to then put the belt around myself to attach the whole thing to me.

Sourcing the donkey was the hard part. I sent a text to everyone I knew asking if anyone had a toy donkey, rang every toy store withing a 100 mile radius – nothing! I started trawling the Internet and found the perfect donkey, but it was in Australia! It was inflatable and designed as a gag gift for a bachelor party. I searched for inflatable donkey and found a shop in the Netherlands with the same item – it arrived on the morning of 31 October!

My costume was complete. I went out on the town that evening with a couple of friends for moral support and we got the whole town (and neighboring one!), to ‘Kiss my Ass!’ all for a good cause. People thought it was hysterical and we managed to raise nearly 130 euro – money is still coming in! I am American, but live in Ireland, so all the photos have been sent to my family back home for them to have a good laugh. I hope you enjoy them as well. My ‘ass’ may be coming out every Halloween as a fund raising project!