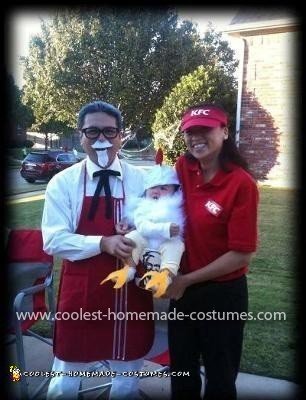 After browsing on your site for baby costume ideas I decided on the chicken. With help from previous entrants made one for my baby girl.

After I finished I started thinking about what my husband and I would be. At first I thought rooster and hen with a baby chick, but my husband quickly vetoed that idea! Haha! So I decided on the KFC crew: Colonel Sanders with a Chicken, and a KFC employee!! We dressed her up and went to KFC for lunch so that we could get a bucket for trick or treating!

We were a hit at the neighborhood Halloween party and at the houses where we went trick or treating!

For the chicken costume I used a larger sized onesie, and covered it with a couple white boas that I had from previous costumes. I used hot glue to adhere it to the onesie. For the head piece made a crest from red felt and stuffed it to make it more 3D, and sewed it to a cap I bought at the dollar store. Using yellow felt I cut out chicken feet and Velcroed to her socks. I finished the look with yellow pants.

Colonel Sanders costume is simple. White pants, white shirt, black shoes and red apron. Sew a red apron and add three white lines down length the left side. Using white felt I cut out a colonel sanders style mustache and a goatee/beard. We attached it to my husband’s face using body tape (found at Walmart!). The glasses were from his Austin Powers costume I made a couple years ago! I Love reusing! :) Final touch was spraying his hair white!

KFC employee only needs a hat, a red golf shirt and black pants. I cut out the KFC from the boxes we had for lunch and hot glued it to my hat and shirt to make it look more authentic.

This KFC Family Costume is simple and fun! Now the challenge is to figure out what family theme we will do next year! 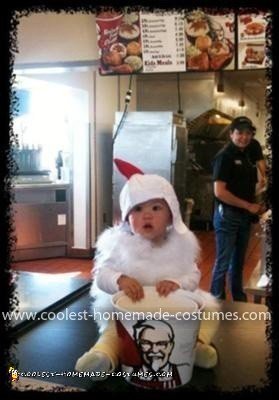 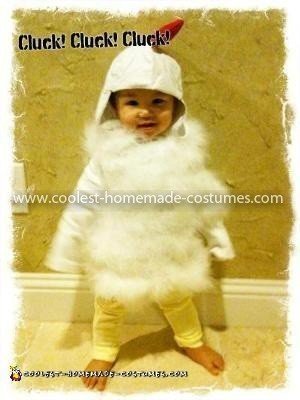