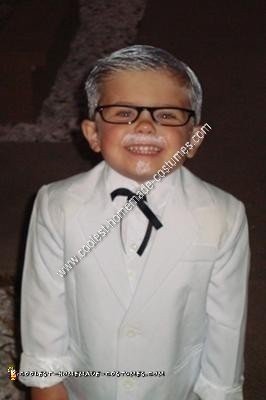 My husband says my mother ruined me for Halloween by always making mine and my brother’s costumes. So, I absolutely WILL NOT buy an already made costume for our son. He has to be something original and handcrafted! (at least until I can’t get away with it anymore – he’s three now). That’s part of the fun of Halloween, right?

So this year was no different. The three of us had fast food related costumes. I’ll add mine later because it really was pretty awesome. I was the hot dog on a stick girl and my husband was a burger boy. But our son was the best. He was Harland Sanders’ aka the Colonel!

The white suit was difficult because it’s not something you come by every day at the thrift store, where I would generally buy something like that. After weeks of searching, I had to end up going on EBay and buying a cheapy suit for $20. The rest was simple. I painted his hair white. I bought a pair of reader glasses at the dollar store and just popped out the lenses so it didn’t affect his vision for the night. Some black grosgrain ribbon from the craft store tied in a bow for his tie. I just bought some black shoes from the thrift store for a couple dollars. Since he’s just a little guy, I knew he wouldn’t keep on any facial hair, so I just used a white eyeliner to draw a mustache and little goatee.

For his trick or treat bucket, I just went to KFC and asked them for an empty bucket and they graciously gave me one. I took the handle off of one of his plastic sand buckets, popped two holes in the top of the chicken bucket near the rim and just zip tied the handle on.

That was it. This Homemade Colonel Sanders Child Halloween Costume Idea was simple and not to mention, pretty inexpensive. I probably spent about $30 total! 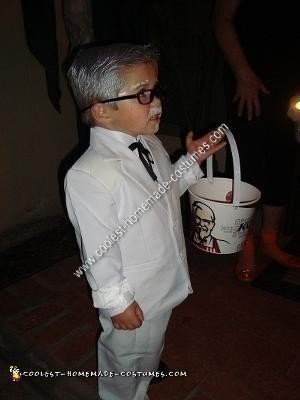 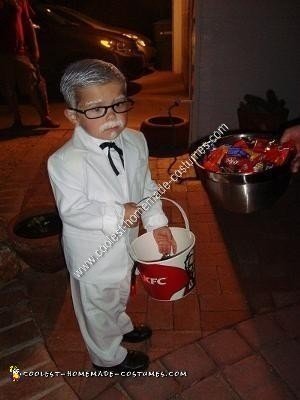