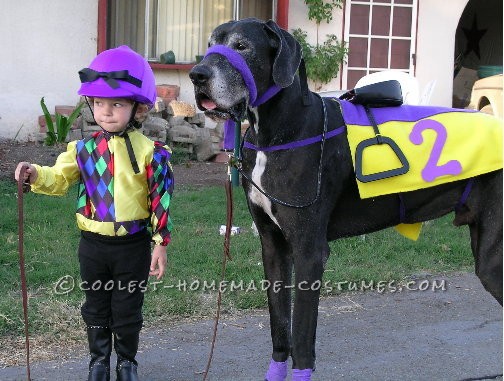 I wanted to enter a local pet costume contest with my Great Dane, and I figured including my darling daughter might increase my odds of winning. Since he was always being compared to a horse, I first considered going with a cowgirl and her horse, but I thought that the idea was not original enough. Then it occurred to me that a jockey and horse would be original and clever, with a bonus cool factor.

I started brainstorming right away. I tend to get rather obsessed once I latch on to an idea I love, so I spent the better part of a month gathering the supplies I needed. I went to feed stores to get a riding helmet and riding crop, and I made the horses blanket out of felt from a craft store- I think I sustained a couple dozen burns on my hands from the hot glue gun while assembling it! The little saddle was a small leather purse, and the stirrups were fashioned from purse handles. I even wrapped his legs in purple bandaging for full effect! I bought a black wig to use as a mane but could not figure out how to \”attach\” it to the dog in a subtle way. I looked at actual jockey silks (shirts) on eBay, but found a jester costume online that looked great for a whole lot less money and paired it with black pants and boots.

The contest was in front of a pet store and was hosted by a local radio station. There were lots of store-bought costumes (bumble bees, flowers, superheroes and the like), which meant lots of repetition. I thought our chances of winning were pretty darn good! We paraded past the judges and then had to wait a bit for the results. I was a ball of nerves, excited and anxious. They called for the three finalists (us and two others) to come back to the stage, where they announced the winners. In third place… not us! Yay! In second place… us. Wa wa wa. Bummer. I am pretty competitive and hate to sound petty, but I truly think our costume was more original, not to mention more entertaining, than two Pomeranians dressed in Hawaiian shirts and sunglasses and sitting in car-shaped dog beds.

But such is life. I have very fond memories of the whole experience and followed up with another dog/daughter costume the next year!

4 thoughts on “Coolest Jockey and Horse Costume: Off to the Races!”