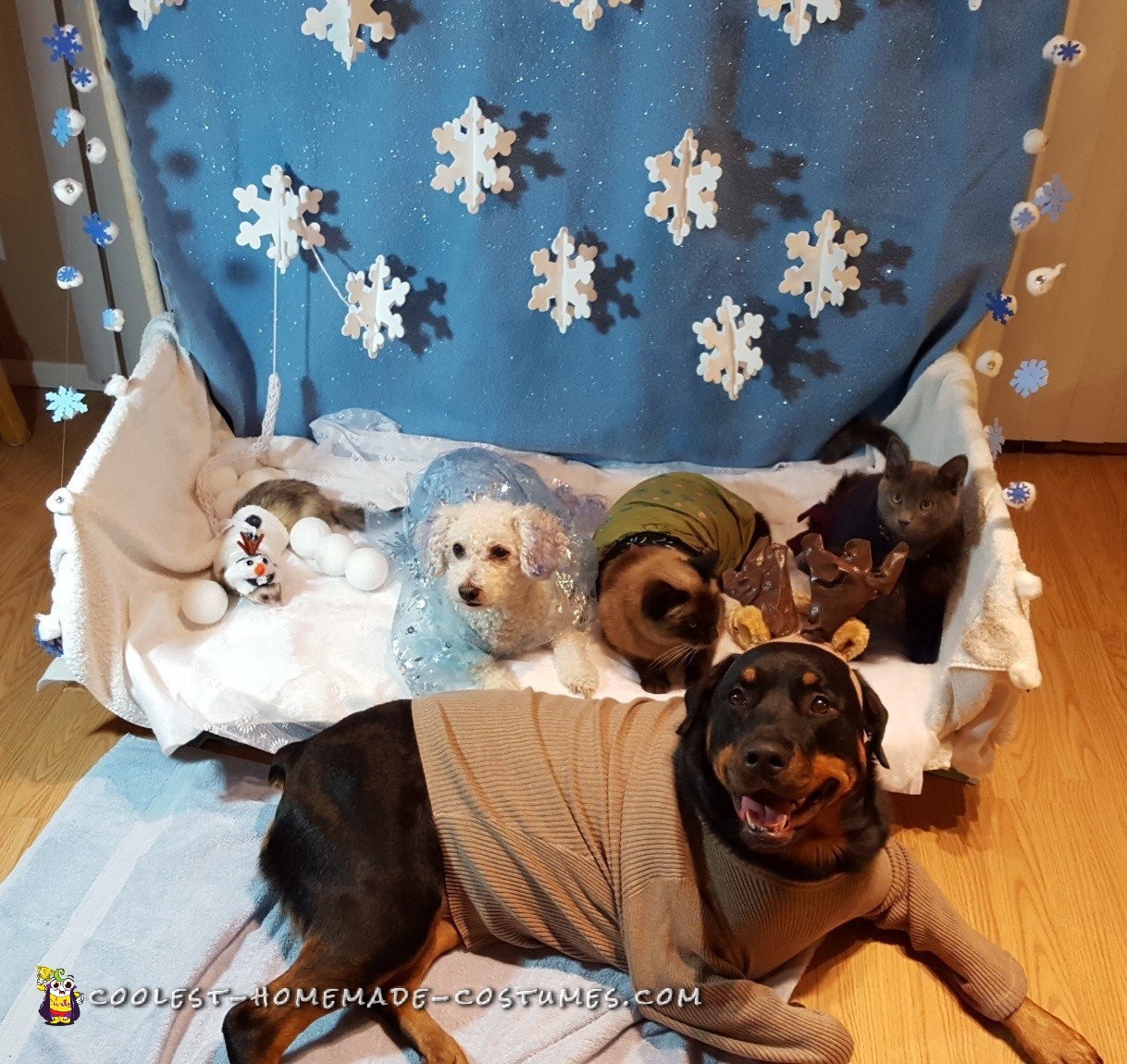 The costumes were made by me, Shannon (age 19), my sister, Katelyn (17), and my mom, Beth. We came up with the costume idea when we were shopping and saw the costume section. We saw how cute the costumes were from Disney’s Frozen and decided it would be a perfect theme for our bunch of animals.

We wrote out a list of what animal would portray each character, then what items we would need to make their costumes. We went to a few thrift stores and purchased the needed base materials.

Kristoff: played by Caspian (gray kitten). For this costume we got a long sleeved baby shirt, baby sweater, baby pants, fur scarf, hoof pick, and rope. We used a sewing machine to hem the long sleeved shirt sleeves to fit Caspian. We cut up the sweater sleeves, hemmed it down the middle, and added real fur from the scarf we cut up to make the vest Kristoff wears. We used the extra pieces we cut from the sweater to create his waist band. For the pants we hemmed those, then added buttons that went to the button holes we added in the shirt, so they wouldn’t fall off. Keeping pants on a kitten is impossible without attaching them to the shirt. Haha. Finally, we spray painted the horse hoof pick brown to look like Kristoff’s ice pick and cut some rope to complete the costume.

Anna: played by Kelsea (Siamese cat). For this costume we used a green shirt, black material and fabric paint. We cut and hemmed part of the shirt to create the bottom of the dress. Then we sewed some black material we had onto that, and sewed on the green sleeves. Finally, I hand painted on the pattern from Anna’s dress. The front and back both got painted since getting cat to pose in the right direction would be difficult.

Elsa: played by Annie (white Bichon Frise dog). For this costume we used a nightgown, little girls’ snowflake skirts, tassels from an old lampshade and hair dye. We cut down and sewed the huge nightgown to fit our little dog. We cut up one little girl’s skirt to make the sleeves, then used the other one for the cape. We spiced it up by sewing on the cute fringy tassels to the back. And since Annie is normally our punk rock dog we chopped off her Mohawk, and covered up her previously colored red and blue hair with a nice “Elsa” blue color.

Olaf: played by Zelda (ferret). This fun costume was made using a fuzzy sock, pipe cleaners, googley eyes, black Sharpie, a ferret harness and yarn. We took the sock and glued it onto the harness since ferrets can escape almost anything. We twisted a pipe cleaner nose and glued it on, as well as the pipe cleaner hair and googley eyes. Then we finished it with the black Sharpie. For safety with a fast moving animal like a ferret I finger knitted a white leash using the yarn.

Sven: played by Roxy (Rottweiler dog). This simple looking costume actually took a lot of time. We cut and hemmed a sweater, but the hardest part was the antlers. I climbed up into the rafters of our garage and opened over 12 boxes before finding the Christmas box containing the reindeer antlers. I climbed down the rickety ladder hot and sweaty but triumphant. Unfortunately it couldn’t end there because red and green antlers weren’t going to work, so I meticulously cut, wrapped, and glued on brown material with a glue gun. I got a few burns stating that this was my hardest glue gun project ever!

Backdrop: The back drop is a very necessary item since we can’t walk two cats, two dogs, and a ferret at once. That would be a funny sight. For the back drop, I took a furniture moving dolly and nailed a big board onto it. Then I put together pvc pipe to hang the blue blanket on. I drilled and screwed the pvc pipe to the base board. I drilled and screwed 3 boards to the back and sides to discourage the pets from escaping, and to help them feel more secure. We laid out the blanket and covered it in silver glitter and ‘glued’ it on with hairspray. Then, we assembled and glued the big white snowflakes. Once they were dry, we used fishing line and a needle to hang them on the blanket. My sister strung cotton balls on fishing line and added snowflakes and gems to embellish them. We put them on the sides. Finally, we covered the wood with white towels and sheer white lacy material then set up a few Styrofoam balls for snowballs

We went to PetSmart’s trick or treating event. We were there longer than planned because everyone wanted to stop and see them. They got their pictures taken by many and had a lot of little girls pet them. Then, we went to Petco’s costume contest. We had the instrumental version of the song, “Let it Go” playing. Everyone loved their costume. We won overall first place, and Olaf won individual first place, a grooming package, which we will use on our dog. I don’t think the ferret would appreciate it. Haha.

Making this costume was a fun, intricate, and special experience. My favorite memories are when we put the shirt on Caspian and he tried to pounce on the real fur sleeves, but couldn’t since they were on him. The other, is our dog Roxy’s reaction to seeing her ferret friend in the Olaf costume. She kept barking at her and cocking her head. It’s funny trying clothes on animals for size, pinning the material, and trying to take it off without getting poked. Thankfully, our pets held still and were very cooperative. Since the pictures we took at the pet stores didn’t have good lighting we brought the whole thing into our house and set up lights for a “studio” type of setting. Once again the animals behaved well and didn’t try to escape…well except the ferret. We put some food gel on the towel to get her to stay for our pictures. Ferrets are the squirmiest creatures! Thanks for putting on this fun contest. 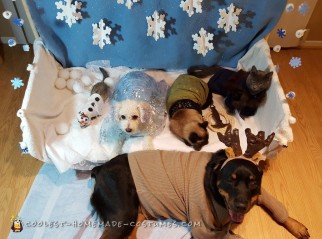 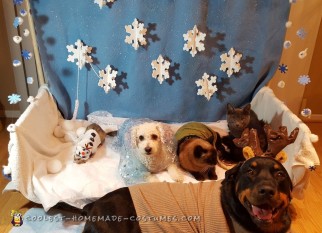 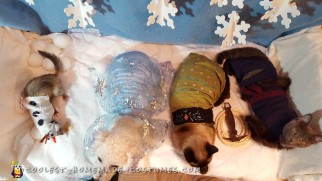 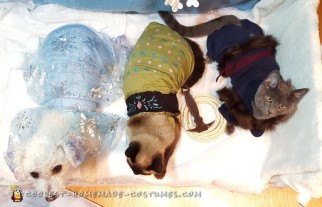 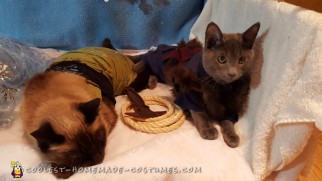 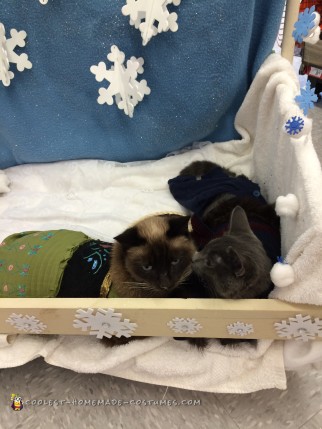 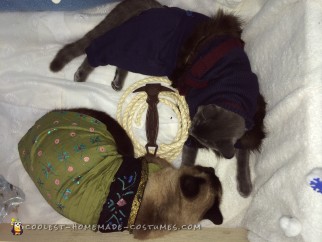