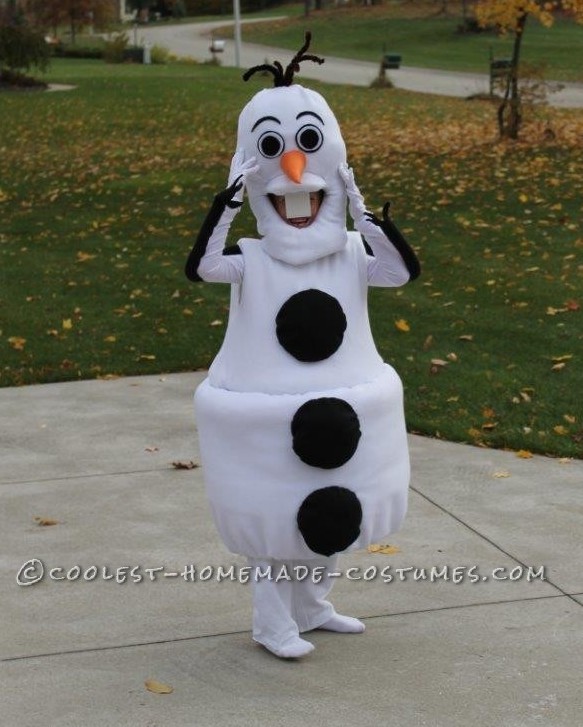 My grandson Landon loved Olaf from the movie Frozen.  One night he called me enthusiastically and asked “Grandma will you make an Olaf costume for me?”  I said absolutely!! not realizing what I was getting into… I had yet to see the movie Frozen.  First I watched the movie.  Then I spent hours combing the Internet for some ideas on how to create the Olaf cost ume.

Then it began.. the process to create the perfect Olaf costume for my grandson.  What I didn’t know was how much TIME this costume was going to take to make it.

The base of the headpiece: a child’s construction helmet (hardhat). On the helmet I recycled or cut up a 1 gallon vinegar bottle for the height of the head (the back part).  I cut a piece of the plastic for a strap for around Landon’s Chin.

To bulk the head on top, I use recycled Styrofoam so I could stuff the pipe cleaners in top of the head.  I used fiberfill to help form the shape of Olaf’s head.  After much trial and error and almost quitting the project. I used a recycled undergarment.I took the bra snapped it in the front fit snugly where the cups are I put old Christmas ornaments made of Styrofoam for the cheeks.

I cut out fleece and felt to make the carrot nose eyebrows and eyes. I had leftover buckram from making window treatments. I used this for Olaf’s tooth so it would be stiff and hang down and not crumple up when the Landon was in the costume.

Body of Olaf: long sleeve white turtleneck from thrift shop I used as the base for the body.

Front and back of the shoulders I used headbands with holes. I sewed the headbands to the back shoulders and the front chest. Through the headbands I threaded and tied tuille strips recycled from a flower girl dress.

On the bottom of the tuille strips I tied a whole hoop around the waist (This is the 1st hula hoop).

I used buttons and sticks for arms made from black felt stuffed with fiber fill. Arms and buttons were attached by sewing and gluing them on the costume.

Through out this project, I had varying times of frustration trying to make different items ‘work’ to be pieced together.  One night at midnight, I thought I’ll have to tell him I’m done! We’ll have to come up with another idea for a costume.  Then the next morning determination kicked in and I absolutely was not going to give up until I had made the perfect Olaf costume.  i wanted my grandson(who stopped by numerous times during the project) to know you finish a project to completion.  you don’t quit.

Olaf was absolutely worth the time and effort.  Landon’s eyes just lit up when he saw it completed.  It was sweet because he received many compliments on the costume.  He was excited to call me and tell me how people were Wowed by his costume:) 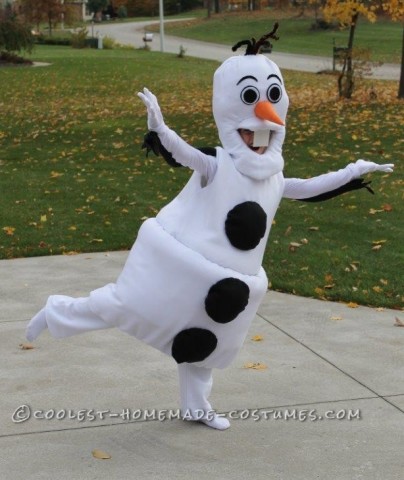 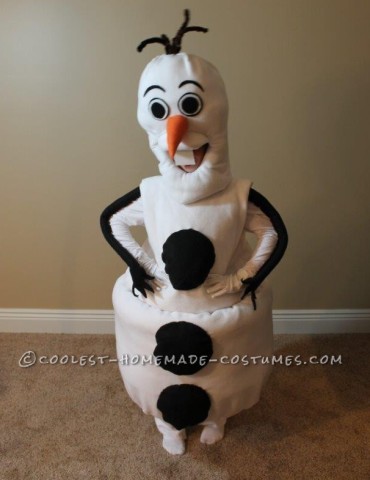