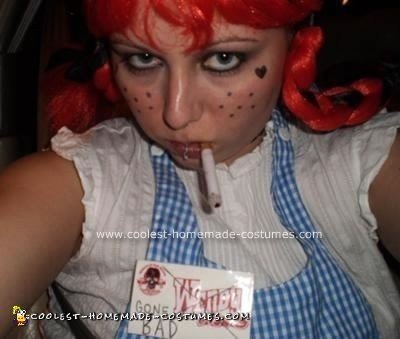 I wanted to be something unique and came up with a Homemade Wendy’s Girl Gone Bad Unique Halloween Costume Idea! I used a few different costumes pieced together.

I used a Country Girl costume for the dress. I found the white under shirt at Goodwill and thought it looked like the real Wendy’s. The red and white striped arm pieces were from a Fairy costume. The wig was a Pippy Long Stockings one. I unfortunately ended up getting two different wigs because the quality of the first one was quite bad. I found the red and white striped socks, knife (I thought it looked like one that may be used in a Wendy’s fast food and she just took it with her because she is a bad Wendy, haha), the tattoos, piercings, and cigarettes at various Halloween stores. The cigarette is FAKE, no worries! I thought it went with the gone bad theme well!

I stopped at Wendy’s and got a few bags and a cup! They were happy to give plenty of bags, saying it was advertisement for them. I doubled two bags and used it as my purse all night! I also used the cup for my drinks.

To make the name badge I used some poster board folded so it was double sided. I cut out Wendy’s logo and name minus the “s” from one of the bags. I used one of my skull tattoos to cover Wendy’s face. I wasn’t sure it was going to work on the paper but came out well! I crossed out Wendy’s name and wrote Gone Bad on the badge. I covered it with tape and attached some safety pins!

For the makeup I used black eye shadow and eye liner. I made the freckles with the eye liner as well. I put three tattoos on each upper arm. I didn’t get the greatest pictures of them. I also had a tattoo on my neck and two on my face (the heart and skull by my eyes.) The piercings were in my nose and bottom lip. 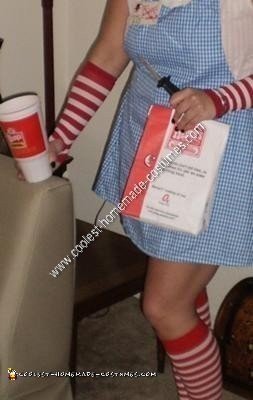 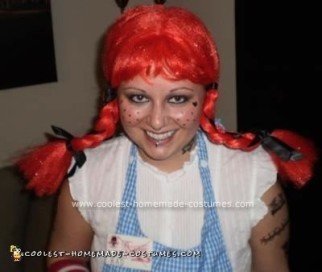 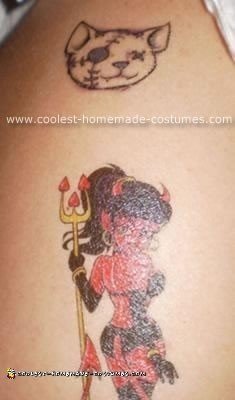