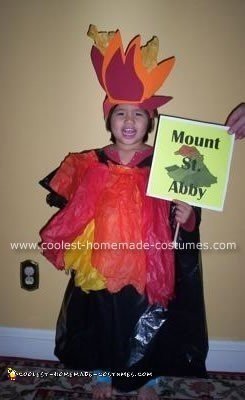 I wanted an original and cheap Halloween costume for my daughter Abby that would wear well for her many parties and outings with friends. We were watching a TV show one night about volcanoes and my daughter said “that is so cool!” Bingo! I said “hey, how would you like to be a volcano?” to which she replied an enthusiastic “YES!”

It was so simple. I took a garbage bag and cut holes on each side for her arms and one for her head. She wore a red shirt underneath. I then took orange, red and yellow tissue paper, crinkled it up and stapled it around the neck for lava. For her headpiece, I bought a red foam crown and added on red and orange pieces of foam cut into flame shapes. I crinkled yellow tissue paper and added that to her hat also. The final piece was creating a sign on yellow cardboard with a picture of a volcano that said “Mount Saint Abby.”

My husband was skeptical as I told him about my creation but I won him over when she first wore it. She didn’t win any prizes but we received lots of comments on its originality and it held up well through all her parties.

Best of all was the cost: About $5