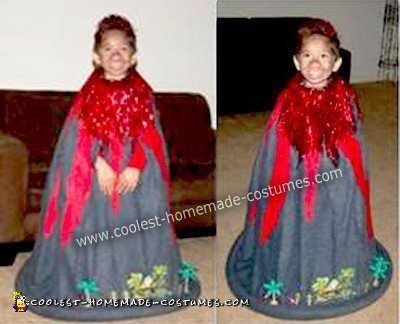 I was taken back for the first time when my son expressed his desire to be a volcano for Halloween since we had been planning a Tie Fighter Costume for a while. I decided to do both since it couldn’t hurt to have two finished costumes and I had all the materials.

The Homemade Little Volcano Costume was a challenge at first, as I didn’t have a clue as to how I was going to tackle this task. However, once the creative juices started flowing it was hard to stop!

I am not a big sewer so I always like to work with fabric that is forgiving and that hide stitching in case it’s not exactly straight. In this instance I decided to use fleece.

I cut out 2 triangles and pinned them along one side and also pinned about a 1-inch fold at the top and a 3 in hem along the bottom of the piece. Making sure to leave an open hole on each side to run the elastic and the Styrofoam pipe covering through it to give the top and bottom of the volcano its shape. If you don’t sew you can always use fabric glue, which works great. You will just have to give yourself a couple days between tasks to allow the glue to dry. I then ran the foam pipe covering through the bottom and the elastic through the top and sewed up the side.

Now that you have the cone shape I printed out pictures of hula dancers, palm trees, and little grass huts. I laminated them and glued them to the bottom of the volcano. I then cut out curvy little pieces of red felt and glued them at the top of the volcano to resemble hot lava streaming down the side. You can get as artsy as you like with this. I also purchased little plastic trees and things from the dollar store to create a more 3d feel. I then got some ordinary shredded red Mylar used for gift bags and sewed it to a strip of material with Velcro to put as a collar around the neck of the volcano to look like molten lava and fire was spouting out.

I used gray and black eye shadow to make my son’s face look like it was ashy and I spiked his hair with red colored hair gel. Once the costume was complete I had my son try it on and found where his hands were and cut to vertical slits in the volcano so he could hold his treat bag. Because the material doesn’t unravel you have no worries about making these cuts.