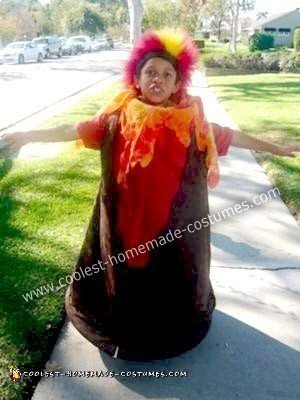 My nephew loves volcanoes. When he asked me to help him make a costume this year, I knew exactly what to make him. He was so excited. I took his measurements and I was off and running with a Homemade Erupting Volcano Costume. He didn’t see it until the day before Halloween. It took me about a week working on it off an on.

I used a hula hoop for the bottom. I cut brown and black material for the mountain and sewed it to a smaller top ring around his neck. I actually used a wire hanger and newspaper to construct the ring on the top. I found bright colors for the lava coming down the mountain and I improvised for the lava on his head by buying a hat. It’s well insulated with flat batting sewn into the material.

He was super excited to wear it and he received many compliments during trick or treating. His younger brother can’t wait to wear it next year.

He is 48″ tall so it would fit a petite woman. It would look great with a dinosaur costume, a caveman costume, or any other natural disaster costume.