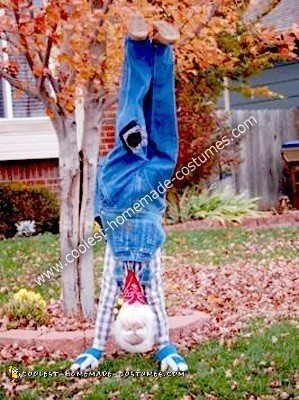 This Homemade Upside Down Man Optical Illusion Costume was possibly the best costume in our school! First we found a mask worthy of being upside down and then the costume creation began!

We found an old flannel shirt and attached the mask with the display head. (The stores will give you the display heads if you ask.) We then put the shirt on his legs and buttoned it. We belted it around his waist so that it wouldn’t slip. The shoes on his feet have garden gloves rubber banded around them. We found some old overalls and built the costume around them. We also cut a hole in the knee and made a patch with a bandana and netting for his eyes.

To make this successful, there is a backpack with 2 PVC pipes upright, coming out of both sides of the overalls. For thickness he has drainage pipes around the PVC’s. We then added boots on the top and clipped the pant legs so they wouldn’t fall down.

It was a hit and he got extra candy for being so creative!