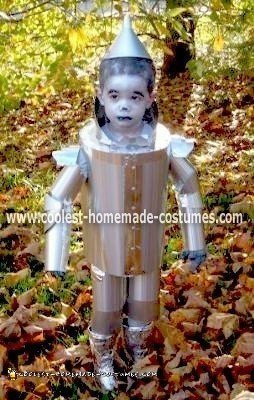 Each year since my son was born I try to think about a great costume for him at Halloween. Last year he was a Oompa Loompa. He was awesome. This year I let him choose and he chose a Homemade Tin Man Halloween. I remember that, when I was a kid, my brother had been the Tin Man man too and that my dad had made the costume. So, from what he could remember, I put some of his ideas and mine together and my son became the Tin Man.

I used roof flashing to make a cylinder for the body and smaller ones for the arms and legs. For the joints I cut a strip of flashing and used foil tape to attach everything together.

The clothes that he wore under the tin suit were spray-painted silver and the hat (funnel) and gloves were also painted silver. For his shoes I just wrapped his water boots with the foil tape, instead of spray-painting them, so they could be worn again.

Everything for this costume was under $20 but this did not include a tin snip, which we had to buy but which will come in useful in the future.

He was a big hit trick-or-treating; everyone took pictures of him. The downside was that the temperature was only about 40 degrees outside and this made the costume feel cold. Also, being only 3 years old, he could not move easily within the costume but he did not want to stop. I think that this costume would be great for a little boy who is about 7 or 8. I would not trade it for anything.