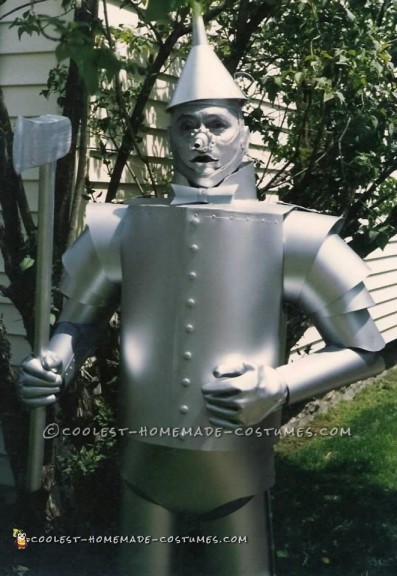 One of my favorite films as a child was MGM’s The Wizard of Oz, and I remember dressing up in my mom’s cocktail gowns and twirling around the house pretending to be Glinda. The film continued to be a favorite throughout my life and it prompted me to design a Glinda costume for Halloween one year. That costume—along with the ability to recreate Billie Burke’s trilling Good Witch voice–prompted auditions for the role of Glinda in high-school and theater productions of Oz.

During the theater production, a group of Chittenango’s Oz-Fest organizers invited the cast to march in their annual parade which paid tribute to author L. Frank Baum. Talk about feeling like a celebrity! We were absolutely bombarded by parade attendees requesting autographs, photographs, handshakes, and hugs. I was addicted and generously invited to the parade ever since.

A few years later, my husband and I decided to construct the Tin Man costume. There were no patterns for such a costume and it was a trial-and-error undertaking. We studied Adrian’s MGM film designs and came up with a model that would allow an actor to move in the costume. Each pattern piece was originated in paper, cut out in a heavy-grade plastic (rather than sharp metal), fitted together with the other pieces, and finally spray-painted silver. Sometimes the patterns were off a fraction of an inch and we were forced to redo pieces until they fit comfortably. The elbows and knees posed special challenges and a snap-away codpiece had to be invented for easier bathrooming. Since the plastic insisted on banging against the actor’s legs, leggings were purchased and padded bra cups—yes, bra cups–were sewed neatly to the knees to prevent friction and chaffing! A long-sleeved, silver shirt was worn underneath the costume to protect the actor from further abrasion.

Other details included a mesh belt under the barrel to support the leg pieces with snaps, along with snaps at the shoulders to support the arm pieces. The hat was a large metal funnel purchased at a local auto parts store with a plastic loop bolted to it for a handle. Boots and gloves were selected for their similarity to the 1939 MGM designs, and everything was sprayed with two coats of silver paint.

The rubber headpiece and nose appliance were purchased at a costume shop. The nose adhered with spirit gum and when it dried, the actor’s face was covered with silver makeup. My husband hand-carved the ax handle and blade out of wood and it, too, was spray-painted silver. Next, we strung three large, rounded-edge metal lids on a silver shoestring and tied them under the barrel so each step the actor made would simulate metal clanking.

At last, the costume was finished and my husband donned it for photographs. Sadly, despite all his work, he never wore it to the festival in Chittenango because we separated before the annual event rolled around. When he asked what I wanted from the divorce, I responded, “The Tin Man costume.”

Only a few other actors have bravely worn the Tin Man costume at Oz-Fest (now called Oz-Stravaganza). Each laughed at the “bras on the knees” but each was thankful for them when walking the long parade route. During one event in Syracuse, NY, our Tin Man removed his leg pieces to sit comfortably for lunch and a couple children were upset because they thought he lost his legs. Fortunately, we were able to explain to their satisfaction that the legs could be removed and later reattached so the Tin Man could rest.

The outfit requires constant maintenance to keep it looking good and functioning properly, but the results were well worth the effort! 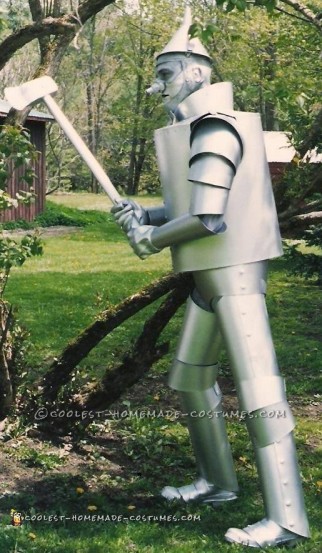