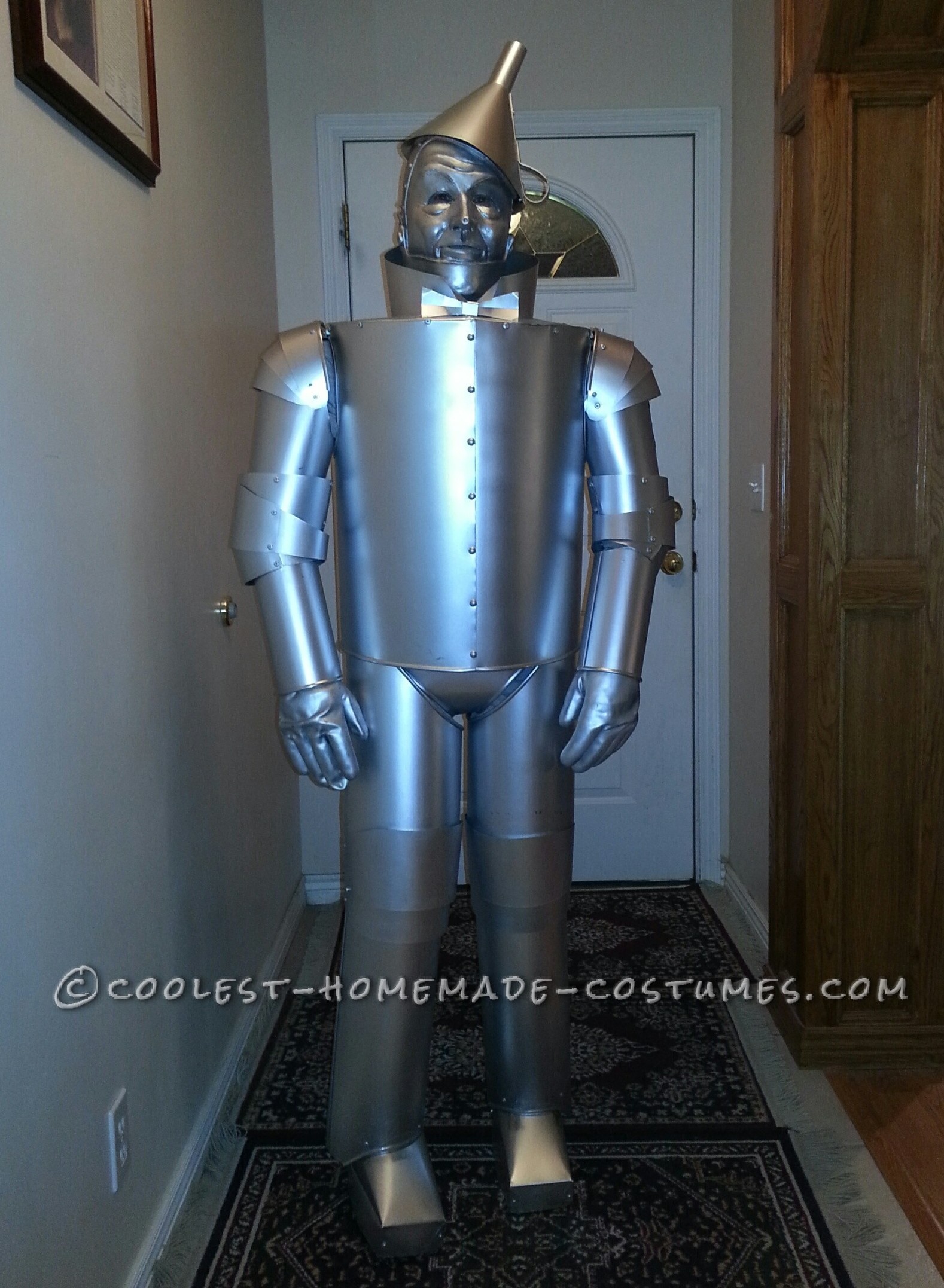 Every year my group at work participates in the company costume contest. The competition is growing fiercer with each passing year and we are the reigning champions for the last three years.

This year we decided on the Wizard of Oz for our theme and I took the tin man. I did some internet research on these costumes and really didn’t find one I was in love with to copy. They mostly look like heating duct and have no real shape to them. My husband works in the HVAC industry and agreed to help. We took reference photos from the classic movie stills and tried to model the costume to that look.

We started with the body. We didn’t want just a flat cylinder and we needed it to fit my body tight enough that I could get arm movement, but still slide in and out of it without big gaping arm holes. My husband figured out how to make the top so that it angled upward by cutting a modified oval instead of a circle. We riveted the whole thing together and I cut some tacks and glued them over the rivets for buttons.

Next came the legs, which are nearly identical to the movie pictures. One thing I disliked about most of the costumes I saw was the butt area. Most people leave this as just fabric. I decided to make a “tin diaper” which is hooked to suspenders and bolted together.  We bolted the legs to the diaper to keep them in place. This restricts the movement a bit, but keeps the joints tighter so not as much cloth is showing.

The arms were a challenge. The elbow in the movie suit was not feasible, so my husband created a three part joint which looks pretty good and bends nicely. For the hands, I just went with heavy latex gloves painted silver (the movie suit had latex gloves).  Attaching the arms to the torso took several attempts. Again, I didn’t want a big gap and I needed some movement.

After several bad ideas, I finally came up with a simple solution. I put a bolt in the torso and a slot t-hinge in the arm. The connection is hidden within the costume. The arm stays tight to the torso and can move side to side and a little up and down.

For the bodysuit I used grey fleece that I sewed down to make it fit skin tight so there wouldn’t be excess fabric billowing out the joints. I painted the fabric that would show with silver paint. I painted all the metal parts with the silver paint as well to give the costume a uniform color.

For the mask, I bought an expensive Rubies mask, which turned out to be way too big and very rubbery. I ended up cutting the mask down the back and overlapping the flaps to shrink the size. My husband built a replacement tin funnel hat and I built a tin jaw that I glued into the inside of the mask. Then I lightly painted the mask silver as it was rather blue. The hat and mask back are secured with magnets.

I used automotive trim on all the sharp edges that I could. This gave it a finished look and keeps me from being cut. I also padded out any sharp edges on the inside. We finished with the shoes, which are also tin and cut and riveted together to fit over a pair of old hiking boots.

Halloween was a big smash. I had the costume on for about two hours and we walked nearly the whole time, parading through the miles of corridors at work. Everywhere we went, people were taking photos. At one point we exited the building and could be seen from the main road. People were staring from their cars. The costume is quite noisy. You can hear the metal clanking around as I walk. This was a nice effect. The costume was quite hot. It does have a lot of layers. And it was a bit heavy since everything ultimately rests on my shoulders. When I did pull everything off, I was covered with sweat, but it was a great time.

All the costumes in our group were top notch. I thought this was a fitting theme, especially since it was the 75th anniversary of the 1939 movie from which we were modeling our costumes. The company has just over 500 employees, who thought we did a great job as well, since our group won the costume contest with 75% of the vote.

All in all, I love the costume. I think it really looks authentic. It is a bit restrictive (you won’t be dancing), but it survived a lot of walking. It wasn’t too uncomfortable either all things considered. I can put everything on by myself, except the arms, which require a second person. 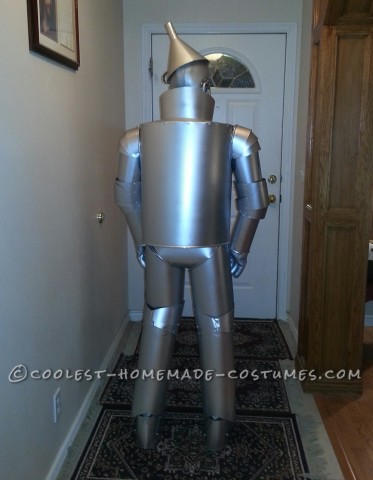 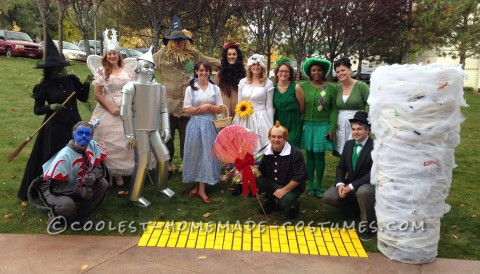