We decided to do a Wizard of Oz theme this year. I was elected to be the tin man. After looking for Wizard of OZ Tin Man DIY Halloween costume ideas, I found that everything looked to bland and wanted to have an authentic look.

Before I started my costume I had not idea how to work with metal or even how to rivet. So my first task was to have my dad teach me a few things, and of course borrow his tools.

I started to watch the Tin man dance and do his song to understand how I would build my costume as close as possible. After about 30-40 viewings (periodic viewings), I had a pretty good concept in mind. I started with the chest piece, then the shoulders, moved down to the elbows and forearm, and left the legs and axe for last.

I spent the most time on the shoulders and elbows since those were joints that needed to be flexible enough for me to actually move in.

I have a few pictures included with just the arms to show some of the flexibility. I got so many compliments on my costume and everyone wanted a picture with me. I even had the other Tinmen worshiping me, lol.

I forgot the hat! I just took a funnel and spray painted it. Then took a party cap cut it open and hot glued that inside the funnel. It stayed on all night and didn’t shift.

It took roughly 2 months (between work and school), 225 rivets, 2 rolls of aluminum (20″ X 10′), facepaint, some spray paint, duct tape (to tape sharp edges), hot glue, a funnel, a party hat, some cardboard, and a lot of cuts to pull this costume off, but it was one of the most fun costumes I have done so far. 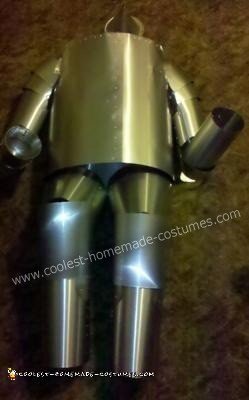