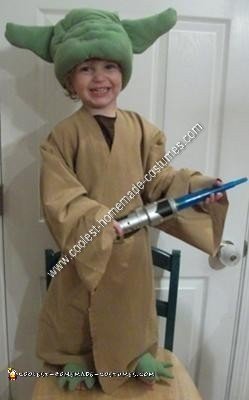 This homemade Star Wars Yoda Halloween costume idea was for my little boy Josiah who is 2 and a big Star Wars fan! The first this that I knew I had to make was the hat. I looked into purchasing the Yoda costume for toddlers but I felt like it should and could be a little more creative!

So I started with a regular kids winter hat and covered it with my favorite green t-shirt *lol* I started around the bottom of the hat and slip stitched the material to the hat so then I had an opening at the top in which I stuffed with fiber material. Next I used a needle and green thread to make the wrinkles through the stuffing by stitching up from the inside of the hat to the top and back down and then I tied it off and repeated this until I had the wrinkles that I wanted. Next I folded the material at the top down and stitched it closed.

For the ears I took Pipe Cleaners and made the ear shape I wanted (x’s 2) I used several pipe cleaners in a bundle to make a thick edge. When I was satisfied with the shape I laid it down on scrap material and made my ear pattern (x’s 4) turned them inside out and sewed the material together on every side except the bottom where I could then push the pipe cleaner shaped back in to the ear and use a little stuffing to make them soft. To attach the ears to the hat I took the pipe cleaner ends and forced it through the top of the hat where I wanted to place the ears and bent them down inside the hat. Then I used my thread to finish sewing the bottom of the ears but when I looped threw the hat I made sure to also go around the pipe cleaner to make sure they were sturdy and would stand up.

After this was done I took the batting and sewed it to the back of the hat with clear thread so Yoda would have hair. Trust me, if you make it through the hat the rest is a piece of cake.

The brown gown on the inside of the robe was a simple brown pillow case that I cut a head hole out of and two arm holes. I stitched the edges of these so they would not fringe but you wouldn’t have to. I had to cut the bottom of the pillow case off and I saved that extra material to make a belt. I had an older toga costume that I took the plastic belt clip off and the belt was tied in the back. You wouldn’t have to have this piece but it was just laying around so I decided to add it.

Now to the robe. I bought some of the dollar brown stretchy material from our local Walmart and I used a bath robe he already had to make a pattern. I left the edges raw on the robe because I thought it made the costume more realistic.

For the feet I just cut out a pattern of what I thought Yoda feet might look like (from pictures I have seen he had 3 toes) I used elastic which I sewed in to make a strap across the bottom and I stuffed them and placed the strap around his feet!

I have to say that this homemade Star Wars Yoda Halloween costume is not perfect but it was my first sewing project and I am very proud of it. 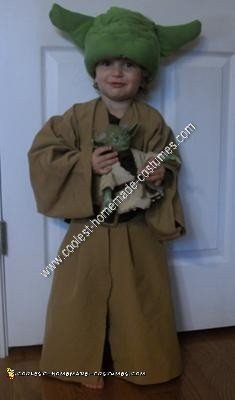 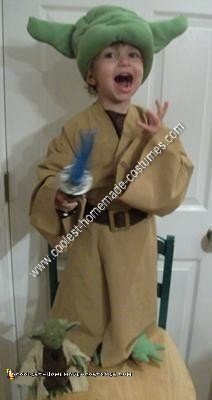