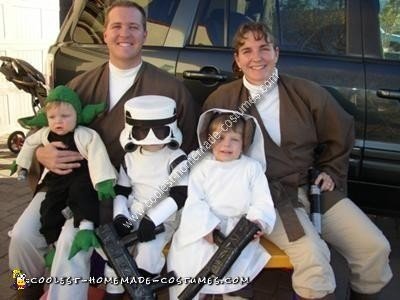 As a Star Wars fan, I have admittedly brainwashed my kids into loving the original movies and my husband is willing to go along with our craziness! Thus the Star Wars Costume.

Stormtrooper: Duct tape, duct tape, duct tape! Helmet was a plastic ice cream container, foam pipe insulation, and sheer black fabric (he could see out but it was hard to see in). I taped a couple pieces of the foam inside the helmet to make it fit tighter. Belt was a cardboard strip with raisin boxes, the bottom of plastic cups, and an empty spice container all wrapped in duct tape with Velcro at the “buckle”. Shirt/top was a black long sleeve shirt with a white short sleeve shirt on top; black tape on the shoulders, white computer paper on his forearms, black gloves. Pants/bottom was his old football pants (with white duct tape covering the stripe on the side) and his sister’s black tights underneath; snow boots with white duct tape covering the blue material.

Princess Leia: I just free-hand cut and sewed a basic dress (rectangle arms that tapered at the end, rectangle body) with a hood and belt. I used some extra brown fabric from the Jedi robes to make circles that I stuffed with batting and then “quilted” the circles. I safety-pinned those brown circles to a brown headband. She just wore regular clothes underneath with furry snow boots.

Yoda: Everything was just cut and sewed by guessing. His robe was the $1 material from Wal-mart and I just sewed the Yoda hands to the arms of the robe because I knew he wouldn’t be able to keep gloves on. The feet were just basically slippers. The ears were stuffed with batting and sewed to a hood that could be tightened with a drawstring. I happened to have a black shirt and pants (which is a tough color to find in baby clothes!).

Jedi parents: I used $1 brown material to make two basic karate-type robes and belts. We wore white long sleeve shirts and tan pants then wrapped extra brown material around our shoes up to our knees for “boots.”

Weapons: more black and gray duct tape with toilet paper and paper towel rolls along with the foam pipe insulation. Lightsabers had a random clip that I found from when our miniblinds were installed which I taped to the end so we could hook them on our belts. 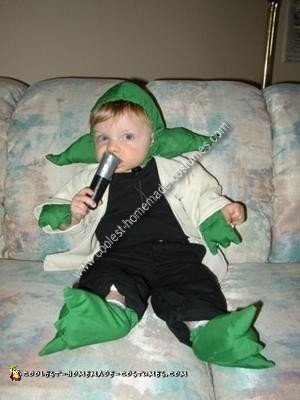 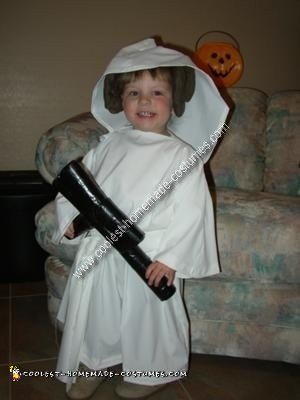 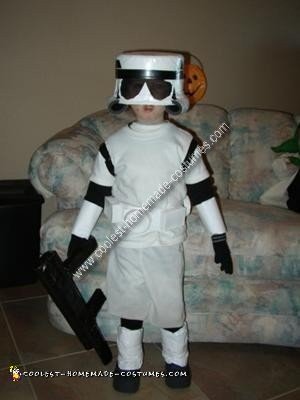