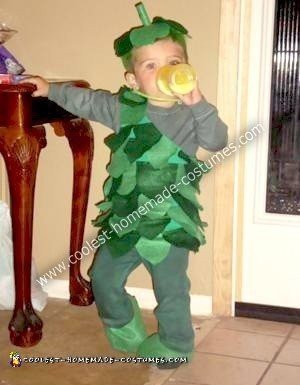 This homemade Sprout Jolly Green Giant costume was perfect for my son, not only because he looks just like Sprout, but because it was comfortable for him and very easy to make.

I just took a green youth T-shirt, cut the neck and one arm off to make it a one-shoulder shirt and cut off the sleeve of the other arm. Since my son is only two and wears a 2T, and the smallest size T-shirt at Michael’s is a youth small, I actually had to cut down one side and cut out about 4″ of the shirt, before sewing it back together. It was just far too wide for him.

I also cut a few inches off the bottom since it was below his knees and Sprout’s suit goes above his knees. Then I cut out leaves from the kelly green and forest green felt square that you can buy at Michael’s for $.29 each. We quartered the square and then cut the leaf shapes. I then alternated them and hot-glued them to the shirt.

The hat is just a 4″ circle with six alternating leaves hot-glued around it. I rolled up a 1″ x 6″ scrap of kelly green felt and made the stem on the top of his head, gluing it afterwards into the center of the circular hat. The hat was fixed to his head with a snap-barrette. I just snapped in onto a dark green leaf and right into his hair. It stayed on great!

I couldn’t find a green long-sleeved shirt or tights that were my son’s size, so I bought forest green RIT dye and dyed a white long-sleeved onsie type shirt. He wore green leggings.

I made little shoe covers with the same kelly green felt squares. I just traced the side of his shoe, adding about 1″ for a seam. I sewed the back of the shoe cover, and then sewed from the toe to the ankle and left a hole for his foot to slip through.

I sprayed his hair green. I was going to paint his face but that is so messy and it really wasn’t necessary. You could totally tell who he was without it. Maybe for an older kid the face paint would work, though.

It was a super easy costume and he looked so adorable!