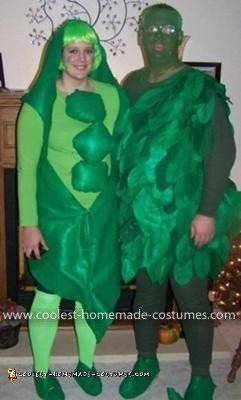 I just got the idea one day talking with my boyfriend on what we should be and with us both being sooo tall Giant came into mind which lead onto the idea of Jolly Green Giant! And I wanted to make it into a couples thing so obviously a vegetable would be a funny choice! So I decided to be a pea pod!

I basically went to the frabric store and bought 3 yards of green felt and 3 yards of green cotton sheet and from there created our Homemade Green Bean Pod and the Jolly Green Giant Couple Costume! The crazy thing is there was no sewing in these costumes. I used hot glue for his leaves and safety pinned my costume up! I cut the fabrics with a fabric scissors and molded up the costumes. I found bright green garments for under my pod and made the peas out of eccess felt stuffed and pinned onto shirt. The giant wore long underwear under the leaves. Our shoe covers were also made out of felt, stuffed and pinned onto the shoes!