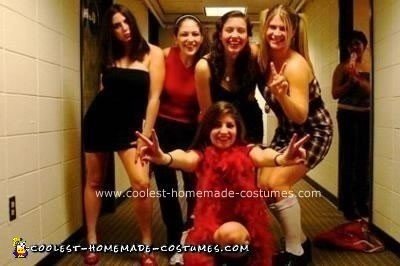 We got our idea of going as the Spice Girls after watching “Spice World” one night. It seemed simple to do and the costumes just came to us.

Baby Spice wore a short plaid skirt with shoes with a large heal. She constantly had a lollipop in her mouth and wore pigtails to really make it. We luckily found a Ginger Spice dress with the British flag on it at a thrift shop, and she wore a red boa and boots as well.

Posh Spice tends to only wear black, so we found a tight, short black dress with heals for her to wear. Scary Spice wore as much cheetah print as possible, including cheetah tights and top. She also used bobbypins and hair ties to make her hairdo. Sporty Spice was very simple, wearing a spandex top and yoga pants with sneakers. She wore a track jacket when she went outside.

To really pull off this Homemade Spice Girls Costume, we talked in a British accent all night, stayed in character, and when pictures were taken, we posed in the same manner as on the cover of “Spice World”.