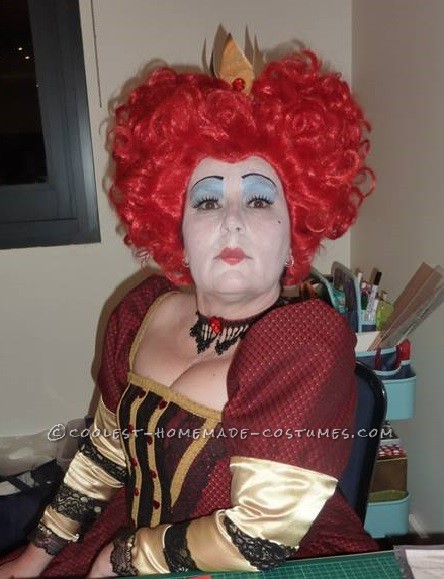 This is my Queen of Hearts costume created this year for a gala dinner at a crafting weekend away. It is the highlight of the annual weekend away, and I go to a lot of effort – I love Halloween.

I spent over 70 hours creating this, using the SIMPLICITY 3782 “Elizabethan Costume” pattern as the base, plus internet searching to provide further ideas – kind of a cross between Queen Elizabeth I plus the original Disney Queen plus Tim Burton’s Queen (my favorite) plus my own interpretation added too. I kept my costume a secret, showing none of the other attendees (except my roommate who had to help tighten my corseting), and my excitement was great as the evening drew near.

Two hours before the gala dinner as I went to start preparing for the evening I was approached by one of the staff members who asked to speak to me in private. I was told that a meeting had been held between the staff, and it was decided that I should not enter the costume competition as I had won it twice before (over the last 5 years), but they would offer me the chance to judge the competition or to choose a number of people to act as judges.

I was gutted, left speechless and not knowing what to say or do. I had spent such a lot of time, effort and some expense to make this outfit – and had been so pleased and excited to be able to show it off. And now my friends, people I had worked and played with for over six years did not want me to potentially win again!!! And after all my hard work.

I had to choke back the tears, thinking “OMG – what am I going to do?” Feeling totally crushed and betrayed, I reluctantly chose to hold my head regally high and play my part and judge the competition. But when the time came, I needed a couple of very stiff drinks to keep me there – all I wanted to do was to run away home (but hubby was away for the evening). I put on a great show, held my head high, even played around with other guests at the Hotel (and accidentally scared a few children – oops!) then retired for the evening as early as I could, and ran away home as early as I could the next morning before I had to face too many of my friends.

Several weeks later as I write this, I still cannot believe that I was not wanted because my costume was probably going to be really good -remember that no-one had even seen my creation! Anyhow, for those interested: the wig was purchased on-line. I stuffed the top of the wig to create more fullness, and re-positioned the existing crown.

The gown is the SIMPLICITY 3782 pattern as mentioned . The underskirt is made from broadcloth, with a felt backed sateen (?) skirt front with double layered felt hearts attached by hand. I didn’t have a hoop skirt, and ran out of time to make one – so reinforced the front hem with left over boning to hold the skirt front nicely.

The gown is made in furniture upholstery fabric (black and red with a gold fleck) which gives it a wonderful weight. I adjusted the sleeves to be a sort of mutton-leg pattern to add a great contrast based on Tim Burton’s Queen. The bodice is lined with broadcloth and canvas, and is fully boned – the first time I have ever done this, and it was surprisingly easy! The back is laced tightly with black ribbon. I have gone for the darker Queen, using black lace (just cheap lingerie lace), gold braid and plenty of red heart shaped gems all the way down both sides of the braid. They do catch the light beautifully.

I added a beaded choker, again with a red heart gem, and bound a pink flamingo to a stick which was decorated to match with gold braid, red heart gems and a black vinyl “leather” handle and used a plastic hedgehog dog toy to play croquet as desired! (I do think the bound flamingo came turned out well!).

The make-up is basic Tim Burton Queen (and very drag queen too): a thin layer of white clown face-paint covered with white eye shadow powder, red heart lips, liquid eye-liner painted eyebrows and beauty spot, and magnificent false eyelashes – the first I have ever used, and I loved the effect! 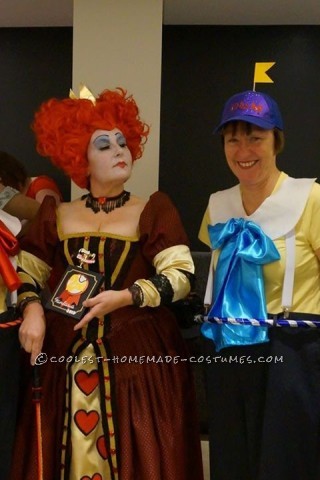