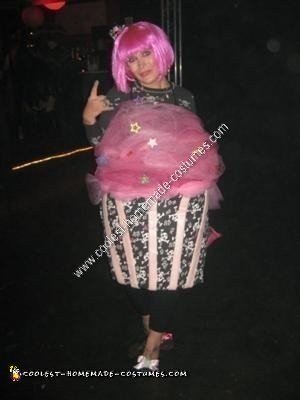 I saw the Sweet Eats Cupcake costume online at all the Halloween websites, unfortunately, it wasn’t in stock and I wasn’t sure it was going to be in time for Halloween. After seeing it though, I didn’t want to be anything else, so I decided to make my own. I came to this site and saw all the other homemade cupcake costumes and tried to take ideas from it and it helped, but I still wanted to try something different. After going to a few fabric stores and craft stores and getting very little help, I figured I was on my own with this one!

After much thought, I decided to make the cupcake liner out of foam. I bought 1 meter of foam (more than enough) and cut the shape of the liner out of it. I covered the foam in a cool skull and crossbones fabric (its punk rock remember!). To make the ridges, I ended up cutting out felt strips and glued them on, it was easier then trying to bend fabric and I didn’t want to use paper, and the effect was the same.

I used crinoline to make a piping ribbon around the top of the liner, I put small elastics a few inches apart from eachother to get small poofs around it, I safety pinned it to the foam. After that, I used a whole lot of safety pins to pin the foam to a baby doll top that I had. Sewing it would have been great, but I can’t sew! Then I took 3 meters of crinoline to make the frosting. I pinched the ends and safety pinned it to either side of the cupcake liner, by doing that, I could fluff up the middle of it to look like frosting. I layered each meter on top of eachother to make it super full.

Then I decorated it with “sprinkles” which were glittery foam stars that had an adhesive backing. I topped it off with a pink wig, and instead of a cherry, I had a black star with a bow and ribbon on it (it was a punk rock wand topper that I ripped off the stick and bobby pinned to the wig) I put on a skull and cross bones long sleeve top under to give it more punk rock and viola!

I won 2nd place at my work for best costume and I think it was my best Halloween costume ever!