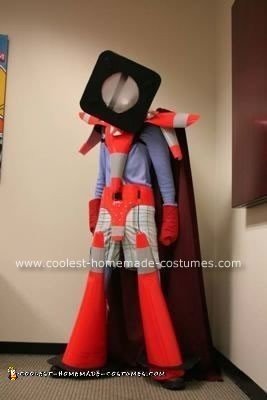 The concept was three-fold, started out a few years ago thinking about the movie “Space Truckers”, there were these robots in it with funny heads I liked. I only saw the movie once though and remembered them as being traffic cone like.

Later I spent about a few months playing a popular online game and I liked the Pauldrons. I decided I would make some by cutting traffic cones in half.

Finally, one time during lunch I was talking with a friend and we came up with the idea of mounting speakers on our bodies with car batteries powering them and walking around playing amplified music and sounds. I drew a sketch during a meeting later, incorporating the traffic cone Pauldrons and traffic cone helmet from the memory of the movie, adding the legs and some other accroutments.

After a while I put it together and this is what I wore for Halloween this year!

A Traffic Cone Playing a Sousaphone