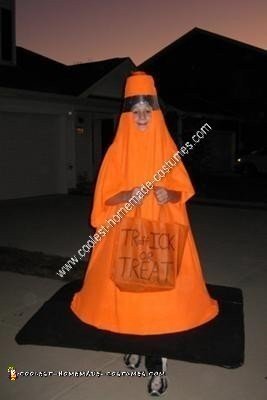 As my kids get older I require that they get more creative with their Halloween costume ideas. My son, Jordan, had the oddball idea of being a traffic cone this year. The only items I had on hand were the hula hoop for the bottom circle, a beach pail for the top, and hard poster board (from recycling) for the bottom.

The nearest fabric store with bright orange fabric was 4 hours away! Fortunately, we were heading out that way for a birthday party. I was able to purchase 3 yards of “safety orange” fleece and 2 yards of black fleece at half price! I fastened the end lengths of the orange fleece to the hula hoop with safety pins. I had my son place the pail over his head and I draped the fabric over it, inside out, so that the hula hoop bottom hung down evenly. I safety pinned the sides together from the top of the pail down to the bottom of the hula hoop and left space open for the arms. I cut a half circle out of the top side of the pail to allow room for my son’s forehead, and, cut a hole in the fabric where his face would show. I flipped it inside out and used silver duct tape to tape around the top of the bucket to mimic reflector tape, which, would have been way too expensive for my “budget” costume (I was able to use a 40% off coupon to purchase the tape). I cut and taped the thick poster board pieces I had on hand to form the base around the bottom of the cone. I had to reinforce the bottom of it with small pieces of wood and sticks so it wouldn’t bend from the weight. I tied some shoelaces around the narrow parts of the circle so I could fasten the base to the hula hoop once the black fabric was cut and glued/taped to the base. I also reinforced the connection of the two parts with more safety pins.

Voila! A $30.00 Homemade Traffic Cone Halloween Costume Idea! The great thing is that I only had to cut one hole in the orange fabric so I can still re-use all of it. I can also hang the black base from a tree and let the kids use it for ball practice! My son had a great Halloween and received more comments from this costume than he ever had in his past 12 years of trick-or-treating!

A Traffic Cone Playing a Sousaphone