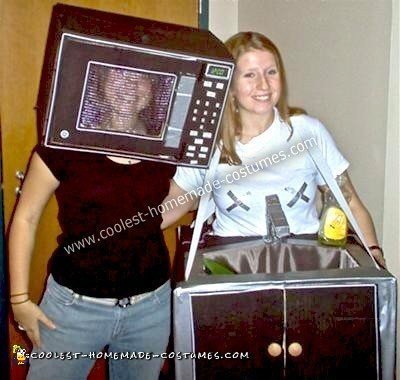 My senior of high school, I came up with the idea for a friend to be a refrigerator for Halloween. We created the costume in one night, and it was a huge hit. That birthed the idea during my freshman year of college to continue the kitchen appliance theme and make sink a Homemade Microwave and Sink Kitchen Duo Costume for my roommate and I.

For my microwave, I used a cardboard box and spray painted it black. I cut a hole in the bottom big enough for me to put my head through, but small enough so the box would still rest on my shoulders. For the front door, I slit 3 sides with a box cutter and scored the fourth side so that it would open. I put Velcro on the inside so that it would stay shut. I cut a hole for the window out, and used duct tape to tape in a shiny screen-like material that I bought especially for the microwave screen. I shaped a piece of cardboard into a handle, covered it with duct tape to make it silver and glued it to the door. I used a computer to print the GE logo (in the lower left corner) and the buttons and time. I bought some clear raised stickers to place over the numbers to keep them in place and to make it feel like actual buttons. I also added a clicky light on the inside of the microwave so I could have my face lit up in the dark. All in all, it was pretty simple and only took one day.

For my roommate’s costume, we took a refrigerator box we got donated to us from Home Depot. We cut the bottom out so she would be able to walk, and we cut two holes in the top, one for her body and one for the sink. We glued and duct taped fabric to the inside of the sink to be the bottom. We also cut slits and scored one side of each cabinet door so that it would open. (And she DID have pants on underneath!) You can’t see it in the picture, but we also purchased a drain stopper from the dollar store and cut a small hole in the sink fabric and attached the drain to it to make it look like an actual drain. We cut another piece of cardboard and shaped it and taped it to make the faucet. The faucet knobs are duct taped x’s on her chest with “L” and “R’ written on them in Sharpie for an added bit of humor. To make sure the box stayed on her, we used some long strands of elastic to make straps. As a final touch, we outlined the entire thing with duct tape to make it look neater, put in a couple of dishes, glued on some dish soap, and glued knobs on the cabinet doors.

These were two of the most fun costumes I’ve ever made! It’s too bad we lived in the dorms without a good place to store them and had to throw them away.