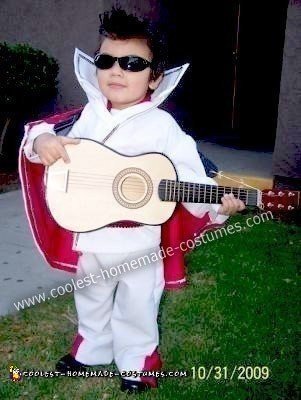 This is my son in his homemade Little Elvis Halloween costume!

To make this, I bought white and red pieces of fabric. Using one of my son’s coats as a pattern guide, I cut out the jacket. I am not an experienced sewer but had got a rough idea from my mom who makes wedding dresses. Each piece I cut out, I then labeled so I would know which was the back, left side, right side, sleeves, etc. I then started putting them together as I thought they should go, and it worked out fine.

I cut out the collar as a rectangle, placed inside a piece of thin cardboard to hold it erect and sewed it onto the coat. Then I put sequins on the collar and on the inside and outside of the jacket opening, where the buttons usually go. I did without buttons, sewing on instead four pieces of Velcro to each side to hold it closed. I bought two iron-on rhinestone eagles and ironed them onto the upper part of the sleeves of the jacket.

I used a pair of my son’s dress pants to make the pattern for the pants and they were much easier than the jacket to put together. After sewing them together, I folded the top of the pants down and made enough room, but not too much, for a belt to fit through so that I didn’t have to put in any elastic. I then added a piece of red fabric, cut out into triangles, to the bottom of each side of the pants to make them bell bottoms.

I cut out the white and the red fabric together in a semi-circle to make the cape. I put a strip of sequins all around the inside (the red part) of the cape. I found a pattern on the internet for the eagle on the top side of the cape and bought what was required for this pattern: red, white and blue metallic confetti and a little packet of multi-colored metallic stars. The pattern was a bunch of dots and I made the outline of the eagle with the white confetti gluing the pieces on one by one. I filled in the spaces of the wings and the head with the red and blue confetti. The part between the red and the blue where the white goes, I filled in with silver stars.

To attach the cape to the jacket, I sewed Velcro to the collar of the jacket and a small piece of Velcro to each side of the end of the sleeve.

The belt was made of red sequins and, for the belt buckle, I cut out a piece of an old plastic window blind. I glued white fabric to it and red, white and blue stars to it. We added his black shades and a little guitar that he already had before we decided on his costume.