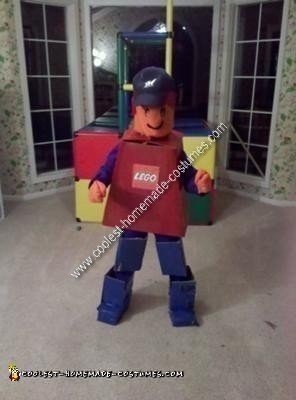 The homemade Lego Dude costume was an original idea sprung by my nine year old. He started making the body out of a cardboard box and was insistent that the shape was a pentagon. The Head flaps were modeled after a Guillotine and conveniently lock his head into the body of the costume.

The blue shirt and pants in Lego color were sewed from Halloween felt. The hands were also sewed and intended to be a claw shape (just like a Lego dude). Ben came up with the head being a cylinder and I helped him cut out the eyes. Then we wrapped the head in orange felt, put black mesh over the eyes, and attached some unique dreadlocks for his head. We topped it off with a hat and a smile.

The boots were made by Ben and his shoes fit right into them. The best part about this homemade Lego dude costume is that it is complicated to walk in and, so, Ben moves just like a Lego dude when walking around!