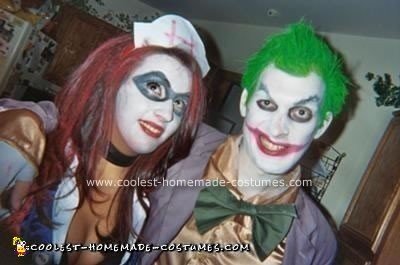 Two classic villains with a new spin. The Joker and Harley Quinn have been around for a long time and there have been several versions of each. I think the classic green-haired, clown-painted-faced joker is the best, but to be the Harley Quinn to that joker would have involved wearing a full body spandex suit and a jester hat. I don’t know about you, but the idea of that did not thrill me.

I did some research and found a much more figure flattering idea for the role of Harley Quinn (from the video-game: Batman Arkham Asylum). Both of the costumes were made from pieces found at thrift stores. We dyed an old oversized suit purple and re-formed it into the correct shape for the Joker.

For Harley Quinn, we sewed colored satin around existing pieces to make it the right shape and made boot covers out of the same material using larger pieces of iron-on binding material to make them stiff enough to stay up by themselves. To finish it off we used cheap face make-up kits and spray hair dye. 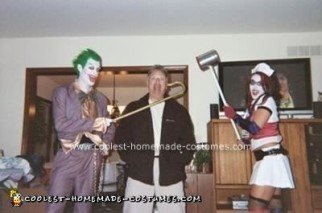 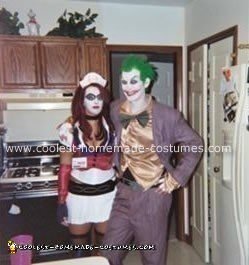