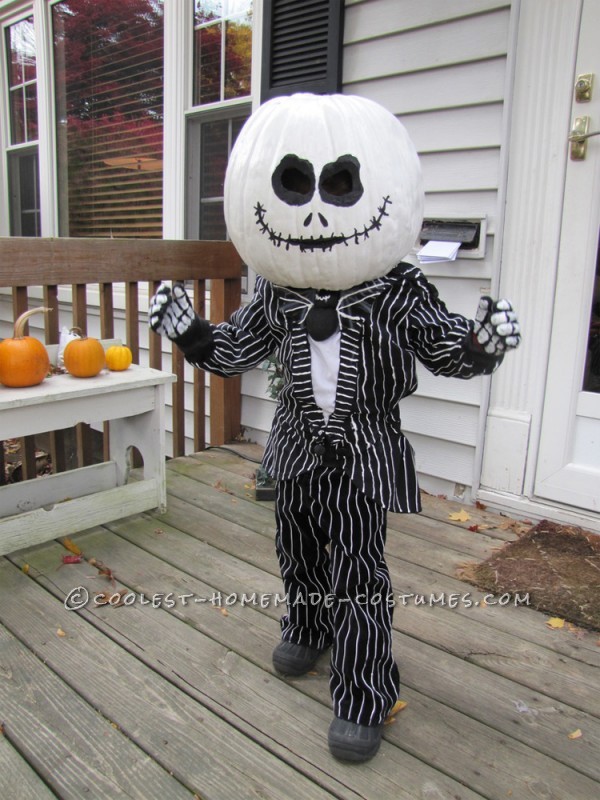 He is four, and his favorite movie is The Nightmare Before Christmas. It’s Halloween time, so he wants to be Jack the Pumpkin King, of course! How can we say no to that? Well, we couldn’t, and we nearly ran out of time figuring this one out! But, we did it, and here’s how we made this Jack the Pumpkin King Halloween Costume:

The pants and tux jacket came from Goodwill… random pieces. I think the pants are girl’s velvet pants, and the tux jacket was big, so I altered it a bit to make it look fitted, and took the buttons off the white connected shirt. The white lines were done with a few bottles of white puffy paint, a bit time consuming, but cheap and easy. The gloves were just plain black and painted with the same puffy paint to look like skeleton bones. The bat bow tie was a cheap bat from the craft store, that I painted with the same white paint on the wings and face, and attached to the tux collar.

For the head, not a fun experience, but in the end it was pretty easy so read on. I promise! Initially, I tried paper mache, after reading some submissions from this site . I was thinking how fun it would be, because I had always wanted to try it. Children do it in grade school all the time, so how hard can it be, right?,  paper strips, glue, balloon, sounds easy. Well, not so easy for me. After 2 popped balloons, glue and newspaper bits everywhere, time wasted, tears, and now two days till Halloween, I was scrambling for another costume idea. But how do you tell a four year old that he can’t be his favorite movie character Jack Skellington? Well, you just can’t, so we didn’t give up

We headed to Hobby Lobby, and low and behold, there it was, tucked in the corner of the sale shelf, a large hollow pumpkin, perfect! My husband created this masterpiece. First he cut a hole in the bottom of the pumpkin for his head to go in, then he spray painted it white, sketched the face on the front, cut out the eyes and a thin slit for the mouth. He used black paint for the eyes, nose, and mouth. He sprayed it all with a paint sealer (optional, and not recommended if not enough drying time, due to fumes!). He added a few foam pieces to the inside of the head to help prevent it from wobbling all over and it was perfect! Speaking from experience, the material that the pumpkin is made from, is not drop-proof, so, be careful! He has dropped it many, many times, and it has been super glued, hot glued, glued all over.  Although, I must say, the huge cracks it now has, makes it look even spookier!

So, after all was said and done, this was one of my favorite costumes! He looked amazing, very authentic, like he stepped out of the movie. He was one happy boy, and we were two proud parents, who didn’t realize we were even crafty. 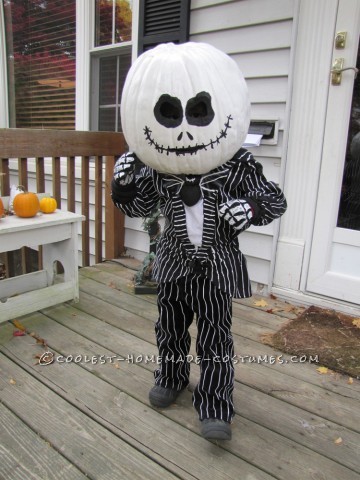 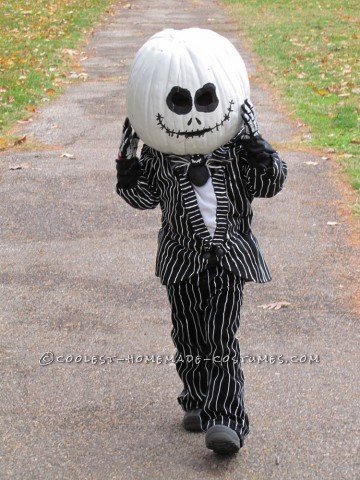 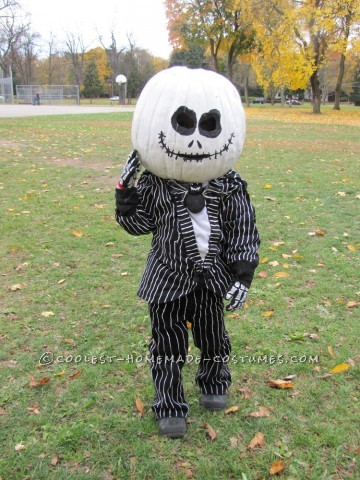