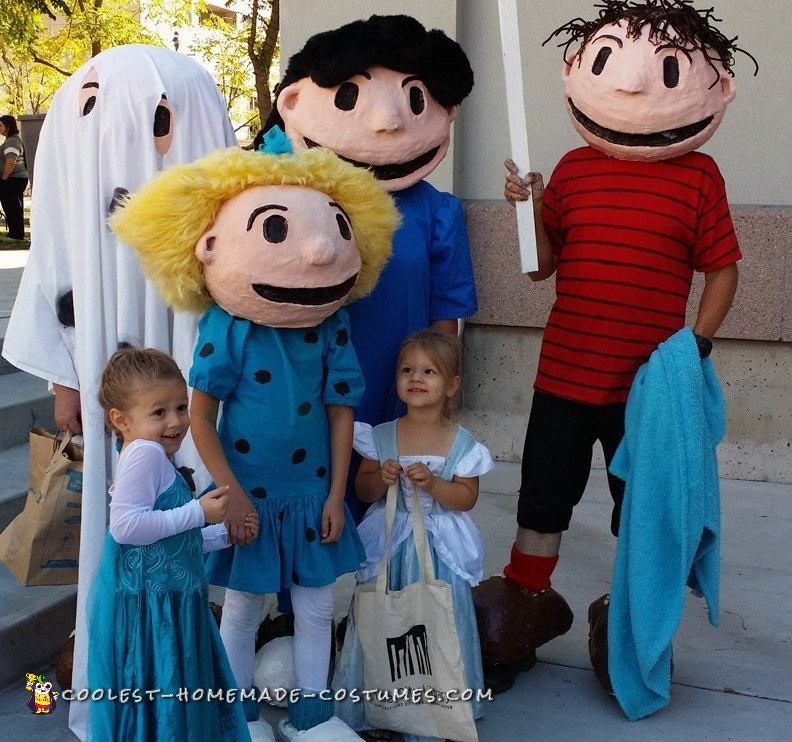 Halloween is our favorite holiday of the year and some of my favorite cartoons growing up are still part of our family’s Halloween traditions today.

This spring we decided to grow giant pumpkins. After preparing the soil, our patch has never been more ready for the great pumpkin. With a lot of work, it was fun to watch them grow a pound an hour during their peak growing season. Late September, our top two weighed in at 514.5 pounds and 305.5 pounds. We are now enjoying a lot of delicious pumpkin soup and pies from the 500 pound fruit, while dreaming of returning giants next summer.

Around July, just as we were hand pollinating our pumpkins, we decided to celebrate October as our favorite Halloween icons. Each of us have been attracted to certain characters due to our appearance and/or personalities. We spent three weeks online shopping for costumes, but unfortunately we did not see what we were looking for. As a result, we decided to build them from scratch to capture the essence and magic of these lovable characters.

We wanted to create masks that allowed us to breathe easily, see easily and hear. Other masks purchased in the past have been almost impossible to wear and still breathe. Most required a lot of assistance to walk without knocking things over or stepping on kids. In designing these masks, we created over-sized eyes and mouths to maximize our ability to safely navigate in dark conditions with lots of little kids around.

Over the years, I don’t recall seeing any complete Charlie Brown Costumes in our area. In addition, we wanted to take it beyond simply dressing up as the Peanuts gang. We also wanted to portray some of the characters as they dressed up for Halloween. Lastly, we tried to create costumes with the same feeling as the holiday specials.

In October, we discovered the new Peanuts Movie and slightly adjusted some of the costumes based on the characters as shown on the movie website. 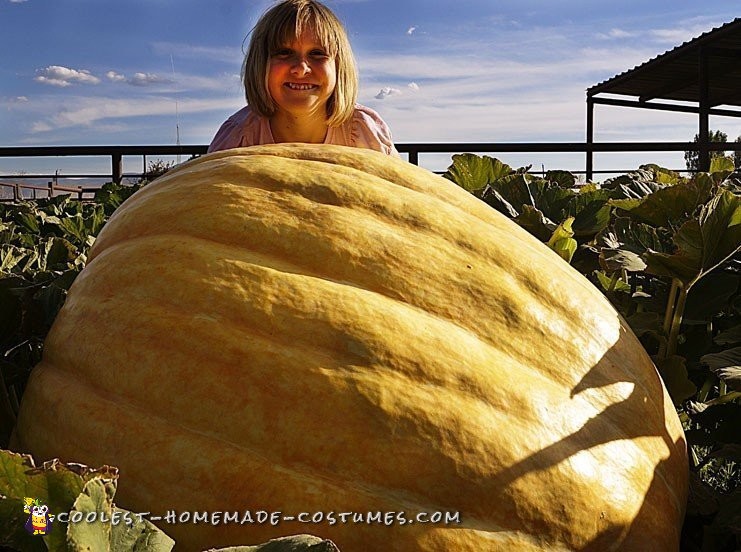 Our 514.5 pound Great Pumpkin grown in our pumpkin patch

Forming the Heads from Beach Balls to Peanuts

None of us had experience with paper mache so we spent a fair amount of time online learning about the art and techniques to form the heads and shoes. Little did we know how challenging it would be.

We purchased two beach ball sizes-18 inches and 24 inches. My daughter is younger and smaller than the rest of our family and the larger size was too heavy and big for her to wear. The smaller ball size was very uncomfortable for anyone else to use.

We used three different recipes to form the heads using information from http://ultimatepapermache.com

Faces were drawn on the Beach Balls using proportions we saw on the comics and costumes used at Knott’s Berry Farm. We then coated the balls with petroleum jelly to minimize sticking.

For strength, we formed the heads with a lightweight quick drying recipe that was reported to be stronger than just newspaper, flour and water

For additional strength, we used inexpensive muslin instead of the newspaper. When we were done, I think we used more than 20 yards of material to cover the heads and shoes. We returned to the store several times to restock.

The batch size was large enough to lay down several dozen strips of muslin before things started to harden in my mixing container.

We formed three layers of this around the ball-nesting the screen material for the eyes, ears, nose and mouth between the last two layers. Each layer had to dry approximately a day before the next layer could be added. Trying to rush the process created problems as the structure would collapse under it’s own weight.

We then formed the ears, lips and noses using the paper mache clay recipe as follows:

We formed the paper mache clay around strips of muslin material and then secured it to the paper mache ball that was formed earlier. Trying to shape wet toilet paper was challenging. It would droop and fall apart often. We eventually adjusted the recipe slightly to decrease the toilet paper to one cup and add a fourth cup of DAP Plaster of Paris. It helped, but I do not think it was a perfect solution.

To create a nice smooth top surface we used the homemade Gesso Recipe:

After the Gesso Dried, we covered it with another layer of Gesso then sealed it with KILZ sealer and Primer. This was followed with glossy latex paint we found on sale at Home Depot. It was mismatched for someone’s project, but it worked great for ours.

After that dried, we painted the black eyebrows and other facial details. Finer work was finished with black magic markers.

To prevent the heads from bobbing around, we filled the insides with insulating foam. This also helped align the eyes easier and distribute the weight so that it would be more comfortable to the wearer.

We then discovered that the glossy paint made the heads look cheap, cold and artificial. We coated the faces with a clear matte spray paint, which fixed the problem after drying.

Lucy and Sally’s hair was created with fake fur purchased the fabric store. Sally’s hair had to be dyed yellow with a temporary dye and washed lightly to get the right color. Sally and Lucy’s hair was styled using gel and hairspray.

Hair curlers, curling irons and other styling tools were used by my wife to get it to look right. The hair was sewn into the venting we created at the tops of the heads with needle and thread. A glue gun secured other points so that it would stay in place. We also secured yarn and pipe cleaners with a hot glue gun for Linus and Charlie Brown. These same techniques were used for shoelaces for the shoes of each of the characters 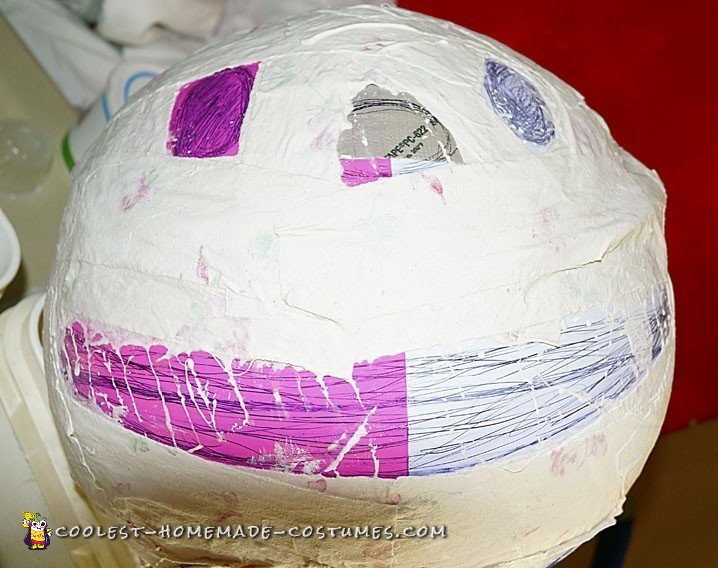 Starting with a Beach Ball 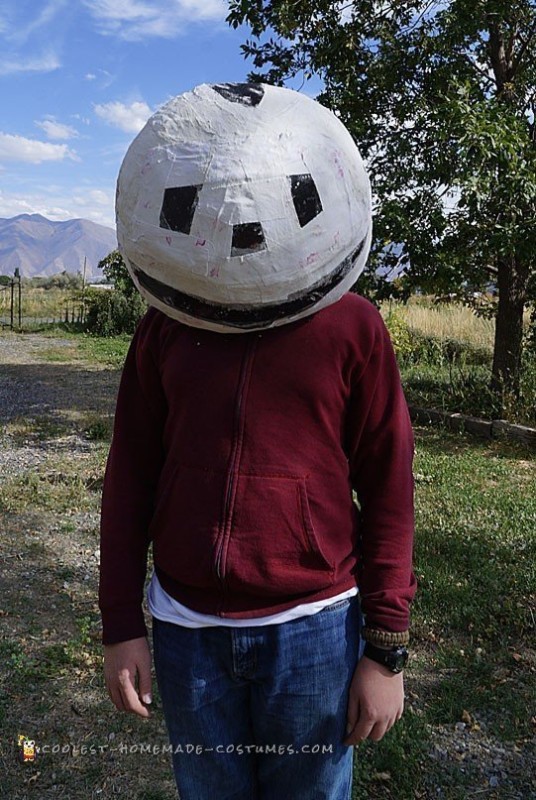 First layers of the Head 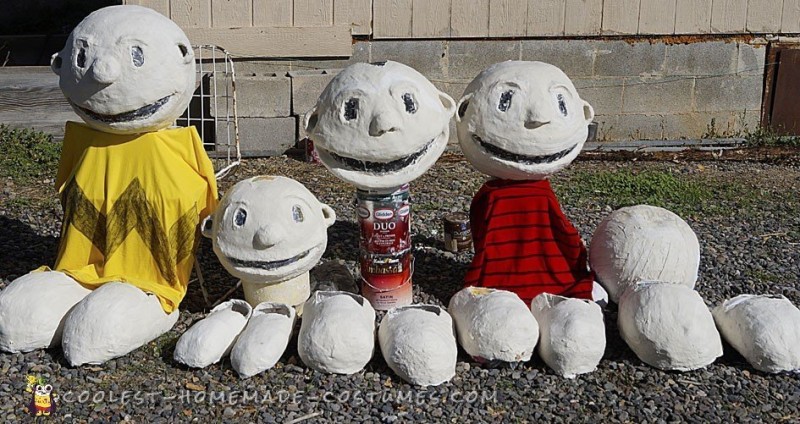 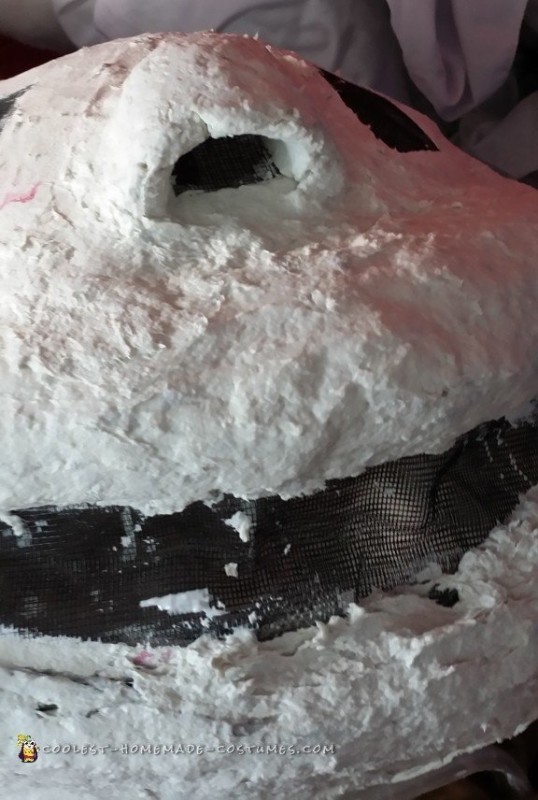 Socks were knitted by my sister for each of the characters to match the shirts and dresses of the characters. My sister also sewed the dresses for Lucy and Sally using fabric we purchased at a Labor Day sale from a local fabric store.

We painted the lines on Charlie Brown and Linus’s shirts using black paint or magic markers. We had to carefully separate the front and back of the shirt with a board to prevent paint from bleeding through to the other side. We also had to paint the black polka dots on Sally’s dress and hair ribbon.

We purchased some cheap white bed sheets at a Thrift store to create the ghost costumes for each of the characters We cut out eyes on each ghost and painted extra eyes on Charlie Brown’s for better visibility at a distance.

Forming Shoes for the Peanut’s Gang

To complete the illusion from head to toe, we created over-sized shoes with paper mache formed around stuffed bread and hot dog bags, following the same recipes above.

We learned that walking with these shoes was very difficult unless we raised them slightly above our normal walking shoes . We secured them to our regular shoes with para cord. We sprayed foam insulation inside the shoes and carved excess out as we formed them around our regular shoes. 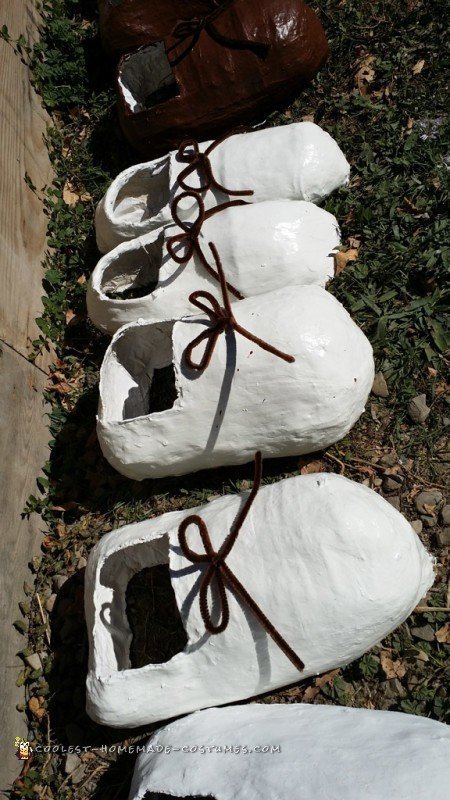 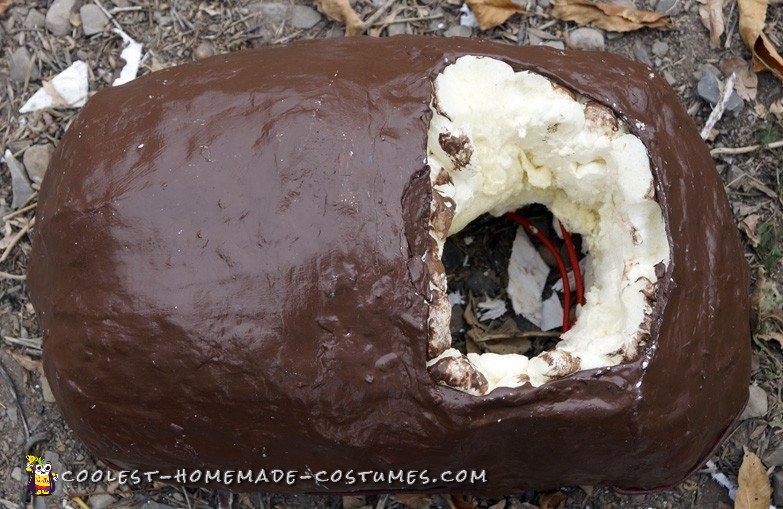 Shorts were sewn for Charlie Brown and pink skin colored felt material was used to create cartoon looking arms and legs. These were pinned to the shirts or pants to keep the full costume together. Linus used a black pair of pants with the legs rolled up and pinned at knee length.

Charlie Brown’s iconic grocery bag full of rocks was set up to get a few laughs on stage. A slight pull of a cord would drop the rocks inside the bag to the stage floor. Black felt was also pasted to the back of his head to match the pumpkin pattern that he modeled for at the Halloween Party.

We created and painted a sign for Linus to welcome the Great Pumpkin. He also carried his trusty blue blanket at each of the events we attended.

We had a lot of fun interacting with both kids and adults wearing these costumes. We could hear the noise of people talking, cheering or clapping for us as we arrived at each location. A lot of families wanted photos taken with us everywhere we went. We missed a few contest stops because of the numbers of families that wanted photos taken with us.

Kids would come up to us to give us hugs, a high-five or shake our hands, One four year old wanted to adopt us and a six year old told us that we are his favorite toys. Another scolded Lucy for being the “mean one” all the time.

Our biggest Halloween surprise was meeting the Charles M. Schulz Family at the Thanksgiving Point Megaplex Theaters. We had no idea they would be there, but we had an opportunity to visit with them just before they flew to Los Angeles for the Peanuts Movie world premiere.

Snoopy was to get his paw print on the walk of fame after the premiere. We had pictures taken with them, but more interesting was they wanted to have their pictures taken with us. The grand kids of Charles Schulz wanted to wear one of the masks and have photos taken of them wearing them. We talked about the new movie and the legacy Charles M. Schulz left for families worldwide.

Trick or treating was especially fun when we came to big Charlie Brown fans. Instead of rocks, we would receive extra big scoops of candy from the homeowners.

We participated in several costume contests and won almost every contest we entered. Judges told us that our costumes had a very different feeling about them than others in the contest, which set us above the competition.

At the end of the season, winning or losing the contests did not matter much this year. We won in so many ways that I never anticipated.

We all won because we had the opportunity to be our favorite characters for our favorite holiday. We also discovered how beloved the Peanuts characters are and how a simple costume could make kids of all ages smile.

I learned that I could do something I never tried before. Creative arts have always been a challenge for me and this opportunity helped to change my attitude towards this kind of work. I was reminded to not be intimidated to try new things and not give up when things get challenging.

We also had the opportunity to meet with the Schulz family, see them smile and approve our costume building efforts. A recent death in their family along with pressing upcoming events were taking their toll on some family members. It was nice that we could bring a smile to them when they were dealing with the stress.

Deep rooted is our hope to bring a smile to others we meet and make them happy. It is also our hope to continue wearing these masks beyond Halloween and throughout the year. As we approach Christmas, we will find a full sized “Charlie Brown Christmas Tree” and visit kids at nearby Hospitals. We want to give them something to smile about and forget their daily battles for even just a few minutes.