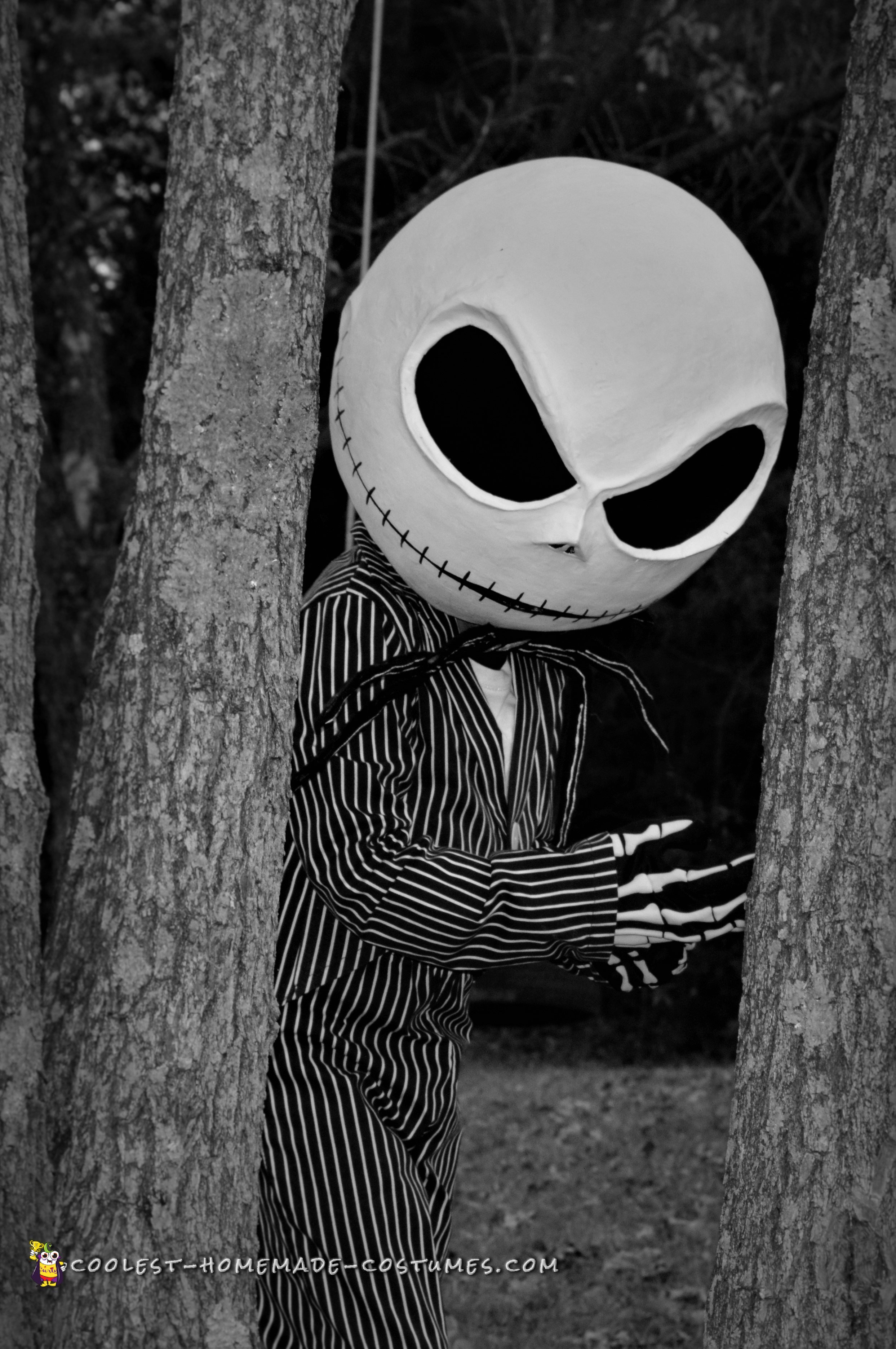 My 6 year old son Braylon loves Jack Skellington from Nightmare Before Christmas. I looked at all the costume stores but not only was it unfairly priced, everything looked so cheap and the masks were terrible. I thought, “There is no reason I cant make this..and better!” My mom always made costumes for my brother and I, and I thought that this was the year for me to start that tradition with my boy. I drew up a few ideas that were in my head and did some internet research. Finally I came up with our plan to make the best homemade Jack Skellington costume this side of the Mississippi!

I started this costume by creating the head. First, I took a large punch balloon and blew it up and held it at my sons shoulders to get the right size. We wanted it large, animated and creepy but not so big he looked funny instead of scary. Then, I tied my balloon and sat it in a cooking pot that would fit just over my sons head.

We mixed up our own paper mache concoction of flour and water and ripped up newspapers. I put about 4 layers, making sure each layer dried at least a full day before I added the next. I made sure not to cover the balloon where it was sitting in the pot. This would become the neck hole of the head.

After the head was set my son tried it on and we estimated where his eyes were at. I sat and drew the face on a large piece of paper over and over again until I had the right size and placement. I then taped the eyes on the head. For cutting, I used an exacto knife to make eye holes, and a small hole in the mouth so he could breath and talk.

He tried it on again to make sure he could see before we moved on to the next step. I made a diy sculpting clay with water, baking soda and corn starch and built out the eyes, nose and carved out the nostrils. After it was all dry I added two more layers of paper mache. I needed to make sure it was sturdy and wouldn’t bust like a pinata if he dropped it.

Once the head was solid, I sanded the whole thing with fine grit sandpaper. I ended up taking a bunch of foam and soft thick sponges to hot glue to the inside of the head like a helmet. This way it would stay in place and not bobble around when it’s on.

After the sponges were in place, I painted the whole inside of the head black. This was in order to prevent camera flashes from capturing the newspaper through the eyes. I painted a white coat of paint on the out side of the head and let that sit over night.

The next day I taped newspaper to the inside of the eyes. Then I spray painted the outside of the head a flat matte white. I did 3 coats total. After the paint, was dry I removed the newspaper and pained on the mouth with black acrylic paint. I also painted inside of the nostrils black.

After all the painting was complete, I took black panty hose and stretched and hot glued to the inside of the eyes. The head is complete!

So now I had to make the rest of the homemade Jack Skellington costume. I ended up taking an old ‘gangster’ pinstriped suit and put it on my son. I started pinning everything where I wanted it. Then I took it off of him and started cutting and sewing. I cut a deep upside down V on the bottom front of the jacket, replaced the buttons with one white button, and adjusted the collar. I cut a big V into the back of the jacket with two small skinny triangle to make the coat tails. Then, I sewed darts into the back to make it tighter on him.

The pants were baggy so I took those in a little too. I added a plain white t-shirt under the suit jacket. I made the bat tie by drawing the pattern out on paper and cutting it out once I was happy with how it looked, placing it on thin black felt and tracing with white chalk. Then, I cut 3 layers and ended up hot gluing them together with floral wire between each layer. This was so it could bend and be sturdy. I did the same steps with the bat head and floral wire. I used white puff paint to make the lines and eyes on the bat tie.

After that paint was dry I hot glued the head to the wings. Then I took a mens tie and glued the bat to it. That was it wasn’t tied in a knot around his neck, we could just slide the bat up or down to take it off or put it on. I found some old skeleton gloves in my Halloween box so he used those for his hands but they were too long so I stuffed the tips of the fingers with batting so they would stick out. And then finally Jack Skellington wears black shoes and we didn’t have black shoes. So we took plain canvas slip on shoes with no ties or tongue and put long slick black socks over his shoes. Viola, black shoes!

We went to Purina Farms in this costume and stopped at a restaurant and gas station along the way. Everyone wanted to take pictures with him or commented on how it was the best homemade Jack Skellington costume they had ever seen. He won 1st place in the costume contest at Purina Farms last week. I posted a spooky Halloween photo shoot I took of him to my facebook and it has gotten a ton of shares, likes and amazing comments. Everyone seems to absolutely love this costume! 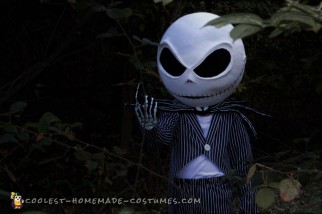 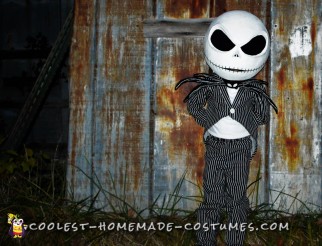 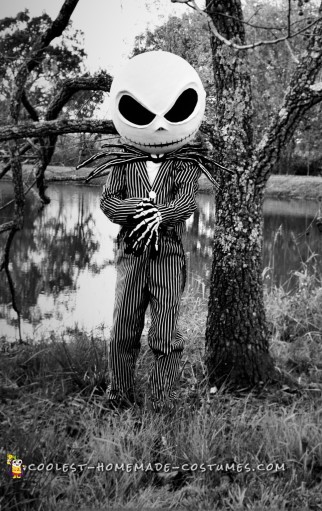 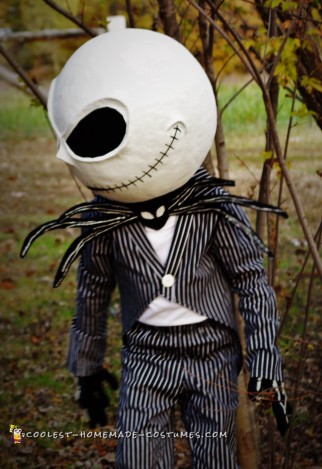 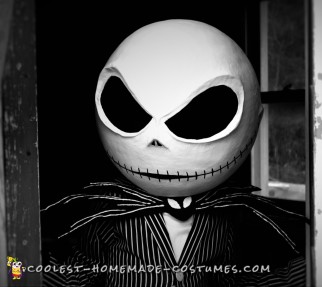 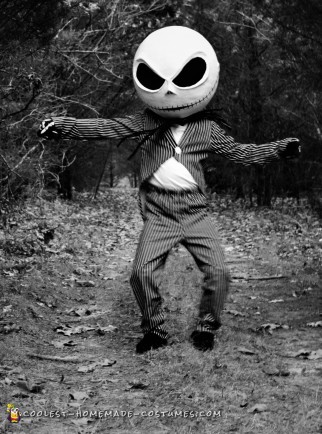 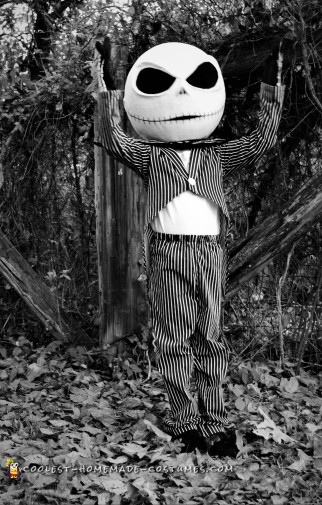 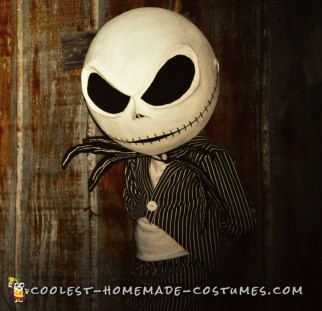 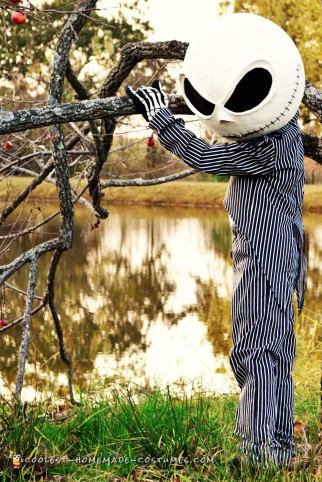