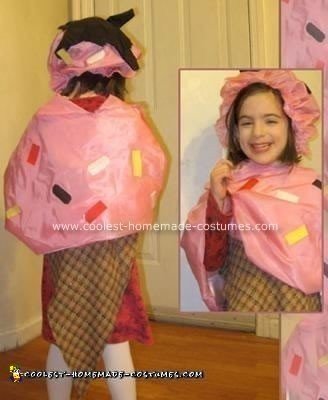 I made this Homemade Ice Cream Cone Costume for my twins, and got rave reviews! I made the whole costume first out of free fabric I had around the house (Old sheets work well). When I knew exactly what I wanted to do, I bought fabric and made it over. $12 of supplies made two costumes.

One nice thing about this costume is that it can be made with no sewing, just safety pins (it may not be as fancy, but it can look great anyway). You’ll want to finish the edges somehow so that they don’t unravel.

I designed the cone to be worn like a jumper (sleeveless dress). I cut triangle shapes for front and back (a nice skirt bought on clearance for $4 yielded 4 triangles, enough for 2 costumes). The triangles came down just past the knees. They overlapped under my daughter’s arms. (see template). I safety-pinned the overlapped corners. I made shoulder straps 2-3 inches wide, and safety-pinned them to the cone, exactly like a jumper. I crossed the straps in the back to prevent their sliding off her shoulders.

[Just skip this paragraph if it sounds complicated:] I cut each scoop/ poncho/ cape out of a shiny dollar-store pillowcase (see template!). I made two layers because I wanted the cape to ‘puff’ out. Some pink lining (shiny and cheap, $2/yd) with some cutting and one seam, made the outer layer, which I made three inches longer. (You could make the outside from a shiny pillowcase and the inside from any light-colored scrap fabric). Instead of a rounded hole for the head, I cut a line and folded down the two flaps to make a nice collar. Easy, and looks nicer. (The template is clearer than these instructions.)

I didn’t think of this until afterwards, but you could actually use a $1 laundry bag for the whole cape, using the drawstring for the visible neck. Just cut a slit in the bottom. Child’s head goes in through the slit and out through the drawstring – it’s that simple. Instant two layers.

Instead of a cherry, I (my mom actually) made a shower-cap-style ‘second scoop’ from leftover pink fabric. Cut a big circle; gather, 1-2″ from the edge, and sew in a length of 1/4″ elastic. I made it oversized and put in some paper towels to keep it from flopping. I cut a ‘dripping syrup’ shape from chocolate-brown fabric, and attached it to the hat.

For sprinkles, I used duct tape, which sticks to fabric beautifully. (I tried colorful masking tape but it fell off). Cut pieces the size and shape of bandaids. 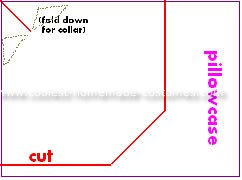