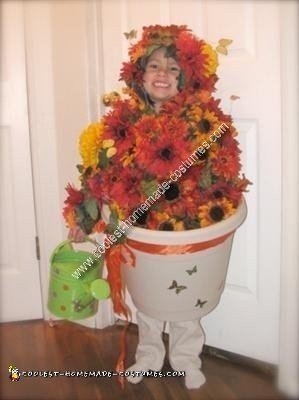 My 4 year old wanted to be a flower for Halloween. My imagination took over and I wanted to take it a step further and make her a flower pot costume. Only problem…I have no sewing skills whatsoever so I had to get creative.

I purchased a large flower pot and then cut the entire bottom out. Then, I bought a bunch of fake flowers. Since I can’t sew I decided to use safety pins. I got a zip up hoodie sweatshirt and started pinning. I cut part of the plastic off the flower (that holds it together) so it was easier to pin. The closer together the flowers are the better it will look and leaves are great too to fill in spaces. I covered the entire sweatshirt with flowers and leaves.

Then I had to figure out how to attach everything together. I had recently removed the straps from my daughters car seat so I decided to used those. I attached the car seat straps to the flower pot with duct tape and created a suspender like affect. My daughter stepped into the pot, we put the straps over her shoulders (I pinned them together at her chest to ensure they did not shift or fall off her shoulders) and then the sweatshirt went on over that and got tucked into the pot.

I added a ribbon, tied in a bow, around the top of the pot and found some butterfly accessories at a craft store. Some I stuck to the pot and others I attached with thin wire to the sweatshirt so they stuck up and it looked like they were flying around her. We also dressed our dog as a bee and she used a large metal watering can as her trick or treat bucket and was a huge hit everywhere she went! 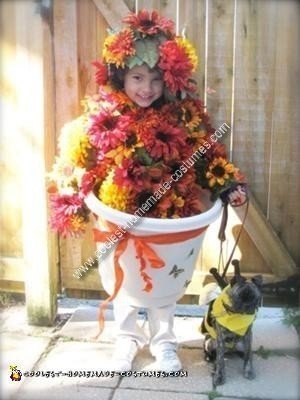 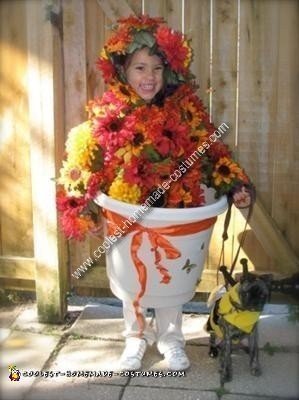