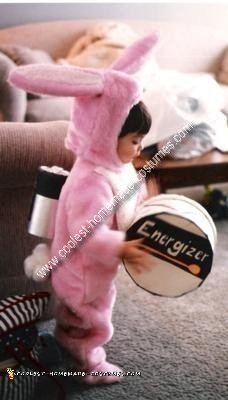 I got the idea of this Energizer Bunny Toddler Costume from my 2 year old son because he keeps going, and going, and going. I started with a generic fabric store bunny pattern with the zipper up the front using pink and white fuzzy material. I followed the package instructions with the exception of making two button holes in the back about 2/3rds up.

The battery is made from an oatmeal container covered in aluminum foil putting a little extra at the top to make the “+” nob. The label was made by hand with construction paper copying the design from an actual battery and glued on. I cut two vertical slits into the battery on the back end where the black construction paper meets the tin foil and threaded a pink ribbon through it approximately 4ft long leaving equal lengths hanging out of both slits. Those ends were placed through the button holes in the bunny costume and tied around my son’s chest inside the costume, not visible after it was zipped up.

The drum sticks are chop sticks with a red pompom stuck through it and the sunglasses are from Kmart. Nose and whiskers are black eye liner makeup. 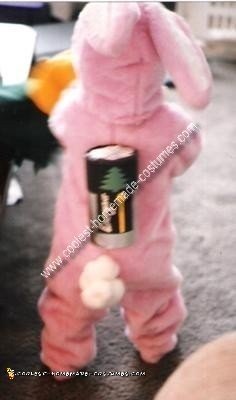 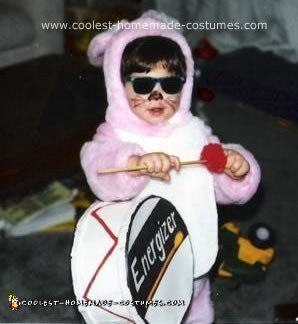