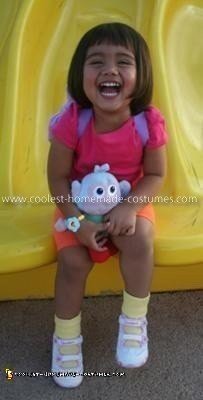 My daughter LOVES Dora the Explorer so I knew that I had to start looking for costumes. Sadly I did not like any of the ones sold in stores/online so I decided to put a Homemade Dora Costume together using things she already had around the house and buying whatever else she needed. Many people would tell me she looked like Dora so I knew that dressing my daughter up like her would be a great idea.

I found her Backpack which was a birthday gift a couple of months prior, she had her white shoes which actually resembled Dora’s shoes and her baby Boots the Monkey that her aunt had bought her was also a good idea to use. These items were all going to be very helpful in putting the costume together. All I needed to buy was a solid pink shirt ($4), orange shorts ($3.50) and yellow socks ($2.50). I really wanted to make her the bracelet but as a browsed through the stores I actually found Dora party chap-stick bracelets (4 pack for $3.50). I was super excited!!With tax I probably spent about $15 total on these four items!

This is the list of what I used to put the Dora Costume together:

As I put everything on her I realized he looked like Dora more and more! She has the perfect Dora hair too! This was the coolest homemade Dora costume we could have made. There are other ideas on this website on making the backpack so you can look into that! As far as Boots the Monkey and bracelet, they were extras I was lucky to have found. They are not necessary because when she wasn’t wearing them you could still identify her as Dora. So just have fun, if your daughter loves Dora she will definitely enjoy dressing up like her. Happy costume making!!! 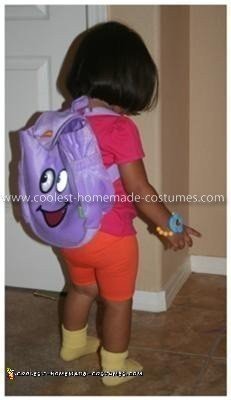