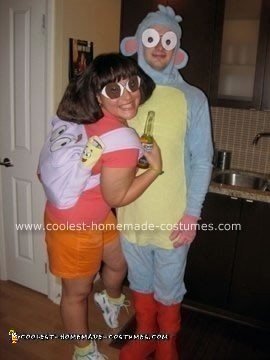 I decided to dress as Dora the Explorer for Halloween because I’ve always said I looked just like her when I was a kid. My boyfriend then jumped on the opportunity to dress as Boots and so we created these homemade Dora and Boots couple costumes.

To make the homemade Boots costume I hit up the sales table at the fabric store and found some light blue fabric, some pale yellow terry-cloth, scraps of pink fabrics, and some bright red felt (less than $20). I made a simple onesie with the blue fabric with a zipper up the back. I cut and glued a large yellow terry-clothed circle on the stomach, and sewed on a tail made with the blue and yellow fabric, slightly stuffed at the end. I sewed together a hood, with some ears and sewed and stuffed more blue fabric in the shape of Boots hair. I sewed some gloves out of pink scraps, and made some red pull overs that fit perfectly over my boyfriends boots.

To make my homemade Dora costume I started with a pink T-shirt which I already had. Next I had to find orange shorts, which I couldn’t find at Value Village (second hand store) but I did find some white shorts for a couple of bucks, and a couple more bucks bought some orange fabric dye at the fabric store. I used scraps of yellow terry cloth from the Boots costume and sewed them onto a pair of white socks for the frills. I bought some beads at the dollar store to make Dora’s flower bracelet.

To make Backpack, I hit the bargain bin at the fabric store again and found some lavender satin, which I reversed. I sewed a simple bag with a flap and a pocket on the side, and thick straps. I had a purse similarly shaped to backpack, which I put inside the bag to give it structure (as satin is very flimsy). I drew Backpack’s eyes on plain white paper and his mouth on scraps of red felt, cut them out and white glued them onto the bag I had sewn.

To make Map, I took some newspaper fliers and rolled them into the shape of Map, and secured them. I then took more yellow terry-cloth scraps from the Boots costume and wrapped it around the newspaper. I glued on more paper eyes and a felt mouth onto Map, and tucked him into the side-pocket I made on Backpack. Cost less than $5 in total.

For Dora’s hair, I got some blocks of florist foam at the dollar store, and carved them into two triangle, each a half of Dora’s hair. I made a crown out of brown pipe-cleaners that ran through the tops of the foam triangles. I painted the triangles brown. I already have brown hair and bangs, which hid the crown of pipe-cleaners across my forehead. I then used lots of bobby pins and hair spray to cover the foam in my own hair, mostly laying the hair over top of the triangles, and tucking and pinning them underneath. Foam, paint and pipe-cleaners cost about a total of $4.

Finally for the finishing touch, I bought some sunglasses at the dollar-store ($2) and popped out the lenses. I drew and coloured big Dora and Boots eyes on paper and cut them out, with holes cut in the center of the pupils for sigh. I attached these to the sunglass frames, and presto, Dora and Boots!

We were quite popular in our homemade Dora and Boots couple costumes, and had a couple kids and parents ask for pictures on the subway ride to our friends’ house. 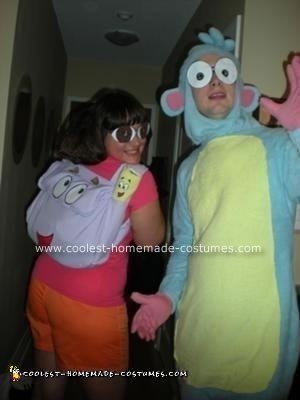 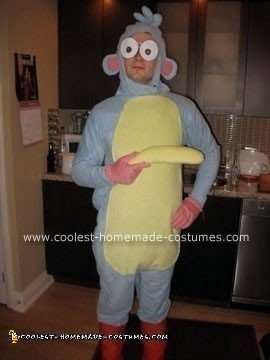 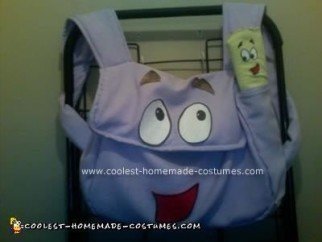