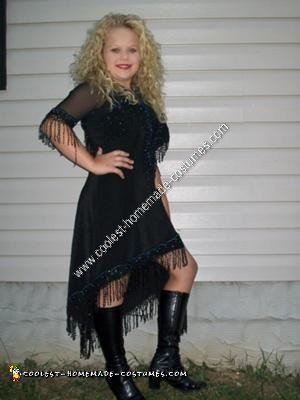 My daughter wanted to be Dolly Parton this year for Halloween, but I was unable to find an outfit in her size. I had no other choice but to make it. I started with a black dress that I bought at the Goodwill. I then went to a local fabric store and bought some sequins with fringe and beads. I started by cutting the dress off to be shorter in the front and longer in the back and made a split in the front.

I then used fabric glue to attach the sequins and beads. I stuffed her bra with some pillow stuffing for a Halloween party, but on Halloween I used two sturdy balloons (The balloons actually worked better). I then fixed her hair to be big like Dolly’s, put on her make-up and placed a mole under her lip. She then slipped on some of her black boots and was ready to rock!