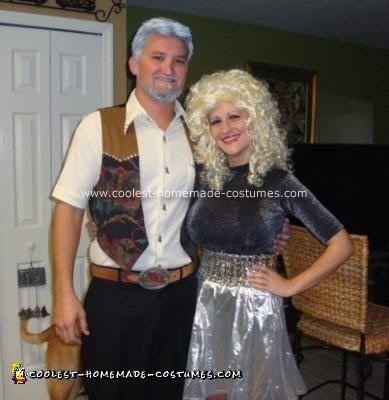 Halloween is my favorite so I always start planning my costumes pretty early. My boyfriend and I decided we were going to be Homemade Kenny Rogers and Dolly Parton Couple Costume this year. Well, I decided and he went along with it. He was such a good sport – thanks babe!

To get the ‘Kenny look’ he started growing his hair and beard out about a month or so before Halloween so that we wouldn’t have to buy him a beard or fake wig. It didn’t get as long as the real Kenny’s, but I think it turned out really well. We bought all of our clothes at Goodwill for very little money. (minus the Dolly wig which I purchased online and the boots and belt buckle we already had) I glued sequins to his shirt, collar and vest, then sewed little cowboy boot buttons in place of the old ones. My mom sewed a zipper and pleats into the skirt and made it a little shorter. For the sparkly belt I found a piece of cloth at Goodwill that she folded and sewed then fastened with heavy duty Velcro. On Halloween I parted his hair in the middle and blow-dried it until it was feathered and fluffier than normal. I sprayed it with hairspray and dyed it with white hairdye/spray we bought at Walmart.

For myself, I put on heavy makeup, eyelashes and a Dolly mole by my lower left lip. The large chest was Styrofoam, ‘fake boobs’ that fit right over my own. My shirt was pretty tight, so that kept them in place all night. A couple people even asked if they were real! Funny!

People kept asking us if we were going to sing a duet, but unfortunately neither of us have the best signing voices! We had a really fun night wearing these costumes.