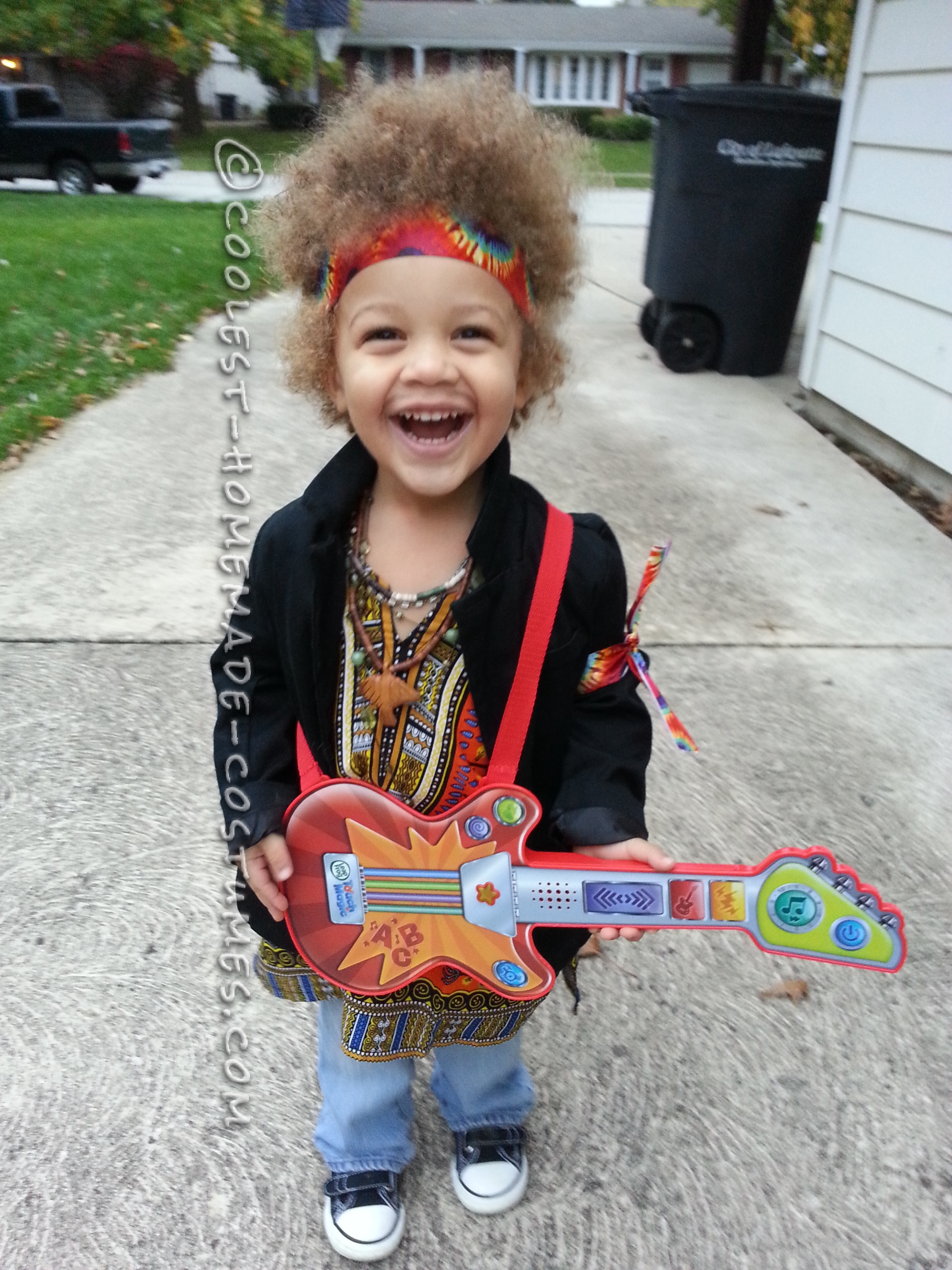 I wanted to make an awesome costume for my 2 year old son before he grew up and wanted a cheesy super hero costume from walmart. I spent less then $20 on items i didn’t already own for this. His jeans were bought second hand and we already had them. Chucks were bought at Target, again already owned. Infeel like Chuck Taylors are timeless. The “bandanna” is actually just ribbon from Walmart yarn section, $2. I used fabric glue to double up back to back so you don’t see white backing when it hangs down in the back and to make it look more like a real scarf. Kayne is huge for a two year old, but a real scarf like Jimi wore would have drown his little head!

The jacket is his dress blazer from Christmas pictures last year… Target. I decided on it after looking at hundreds and hundreds of pictures of Jimi online. Popular belief would be that Hendrix was a hippie rocking tie dyed shirts peace signs, I wasn’t alive then but that’s not what I found when I looked him up. He wore much more high fashion, button up silk shirts. After 3 weeks of shopping second hand stores,  I finally had to come to terms with the fact that high fashion silk tops from the 60s for a two year old weren’t hanging out ay goodwill. So i went back to the internet. Closer to the 70’s, Jimi started wearing some more ethnic clothes, beads and turquoise. So I went on the hunt for a toddler African shirt. His shirt is the only thing I bought NEW for the costume. It’s African Dashiki, I ordered it online at safari gifts and choose orange because it was a popular color in the Jimi pictures I had viewed. I went this route instead of sewing a silk blouse and using purple,  because I was afraid whole outfit would come across as Prince (who I love and who was clearly very inspired by Hendrix) but I was going for clear “that’s Jimi Hendrix” reaction without having to write it on him.

Going with the ethnic garb and jewelry instead of the blouse and scarf made it more organic and separated Jimi from Prince. The 4 necklaces he has on belonged to my father and makes the costume special to me. They were from the 60s, and handmade. I was at a loss for where and what jewelry to get,  and almost gave in and went to the costume store. But I had in my head the necklaces I remember my father wearing and decided not to get anything cheesy and just go without for the picture (I was taking it for a local costume contest to win a gift card to a second hand children’s store,  we are currently winning!) and before Halloween I would figure something out,  even if I had to make one.

For some reason, the day I took the pictures, I decided to look in my fathers box of belongings I’ve kept since he passed away when I was 25, and low and behold, his old hippie jewelry was in there. I teared up when I put them on Kayne. The toy guitar was bought used at Once upon a child!! A staff member actually found it after I had given up. She had asked what I was digging for. She was extremely helpful and this is Kaynes new favorite toy. I had searched many places, and even was going to buy new or online, but everything was too big,  wrong color,  no strap,  too heavy… Just ANY guitar wasnt going to work, so I was extremely happy when I found it, and found out about the contest that store was having at the same time. Hopefully we get some winter clothes with that giftcard!! The facial hair is my eye liner, grey not black. Ive seen pictures of some bad toddler facial hair,  I think people use Halloween makeup, and its too dark and looks creepy. I admit the facial hair is subtle, but Jimi didn’t have a thick mustache. And lastly… His hair… Is NOT a wig. Lmao. That Afro belongs to him. And yes I’m lucky enough to get to brush it daily. I can’t believe how impressed people are with his “Afro wig” haha. I just teased it up a bit higher then we normally wear it.

So there ya go… Kaynes homemade Jimi Hendrix costume. I know it is simple and not over the top, but sometimes costumes don’t have to be. I’m glad it looks effortless because that was my intent, but months went into it. Im thrilled with the outcome and I hope everyone likes it! 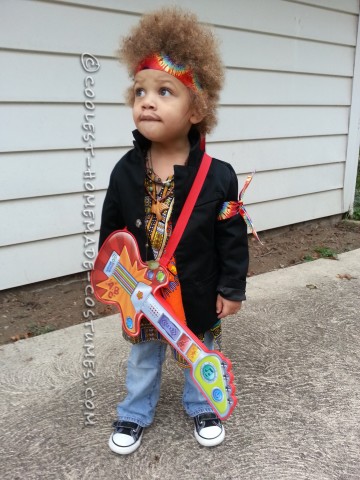 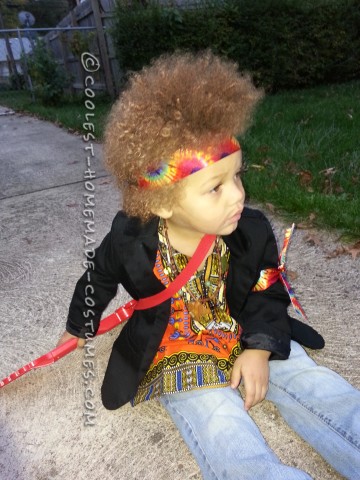 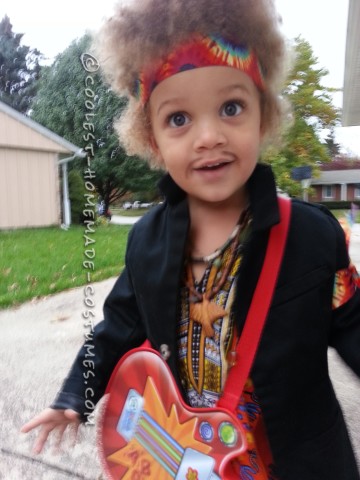 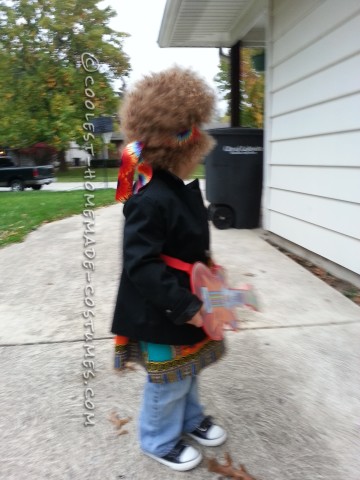 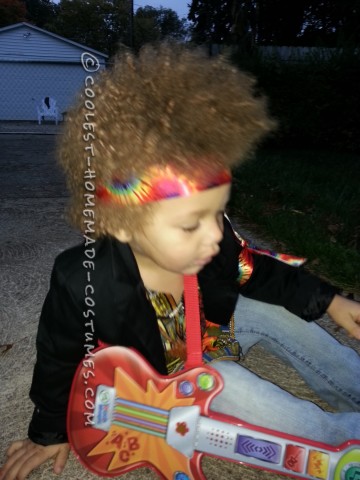 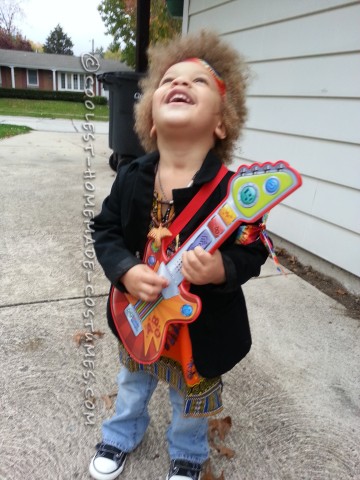 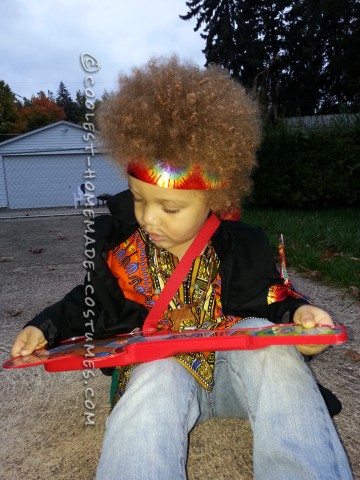 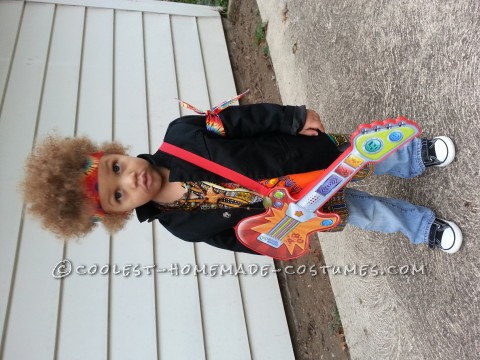 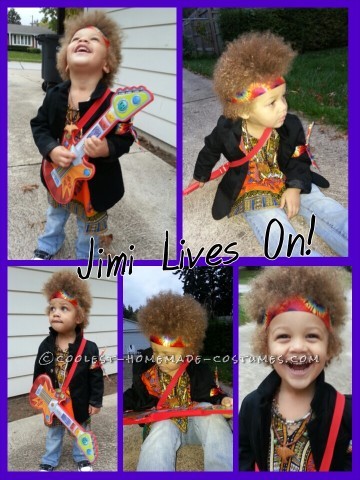