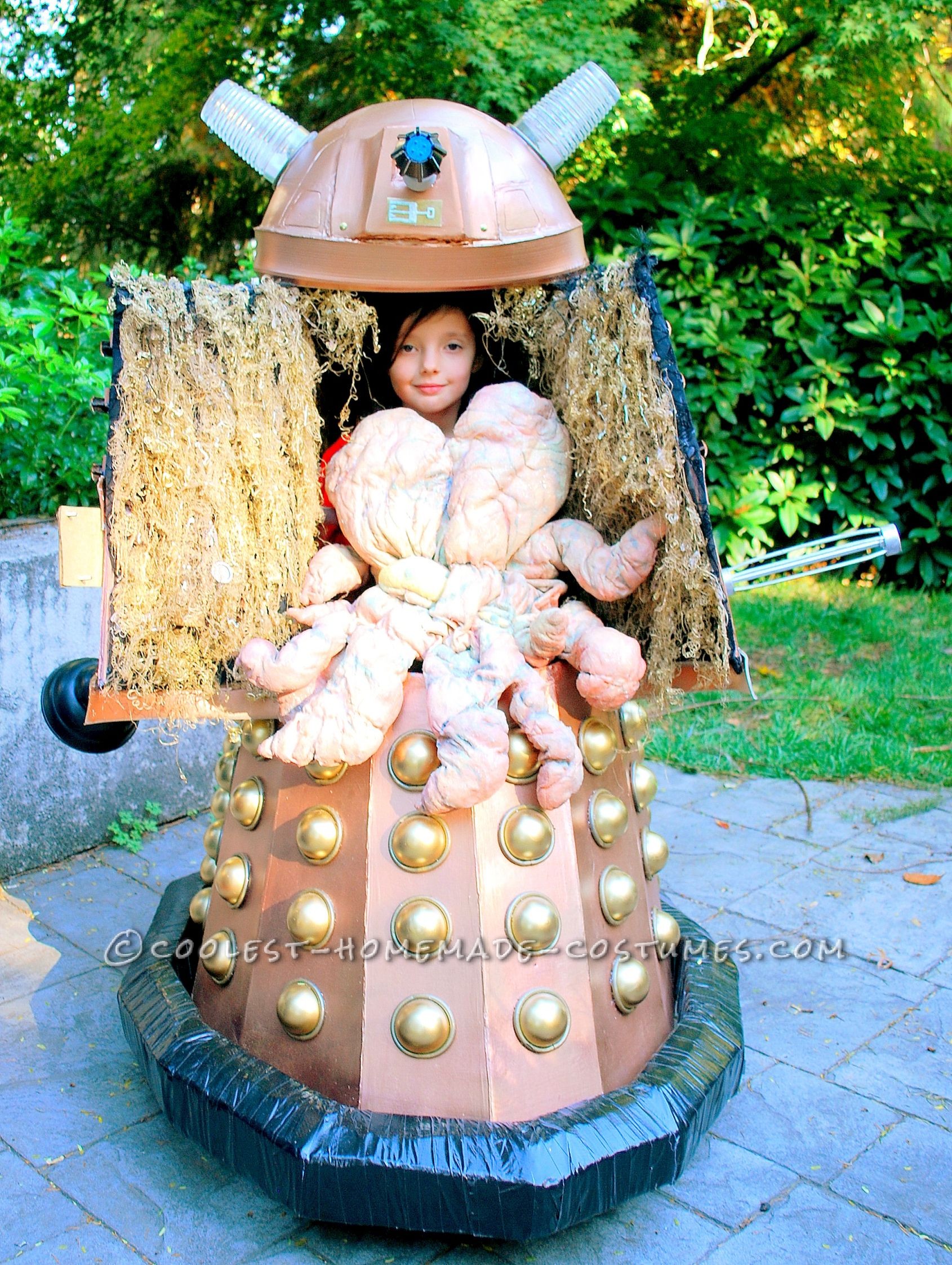 Meet Dalek Caan.  Dalek Caan is an elite Dalek and the last of the cult of Skaro.  Instead of following the collective mind like the rest of the Daleks, he was made to imagine; think slightly different, creatively even.  This is highly unusual Dalek behavior.  He is especially important because, Dalek Caan ends up helping the Doctor defeat the new Dalek Empire.  Yes, I know, I’m the crazy woman who knows waaaay too much about Daleks.  This was inevitable after researching every aspect of Dalek kind for this project.  Forgive my rant, now on to the creative process.

Being huge fans of the show, my daughters’ wanted Doctor Who inspired costumes this year.   My youngest wanted to be nothing other than a Dalek….really?  Although they are one of my favorite Doctor Who characters, I was just not sure if we could pull this one off.  It is definitely the most extensive Halloween costume that we had ever attempted.  After scouring the internet we came up with a plan.  It had to be lightweight and not break the bank.  Luckily, there is an excellent Planet Improvement Center here in Eugene, OR.  They sell recycled home improvement items of all sorts.  Since we were building both a Dalek and a TARDIS we had lots of supplies to gather.  My girls and I had so much fun imagining what the possibilities could be.   The people there thought we were nuts, putting fixtures on our heads and wrapping ourselves in metal sheets and gutter coverings <:-)  We started with some scrap wood pieces and dowels, some plastic gutter covers, thin metal sheets and some small pvc pipes.  Where to go from here? 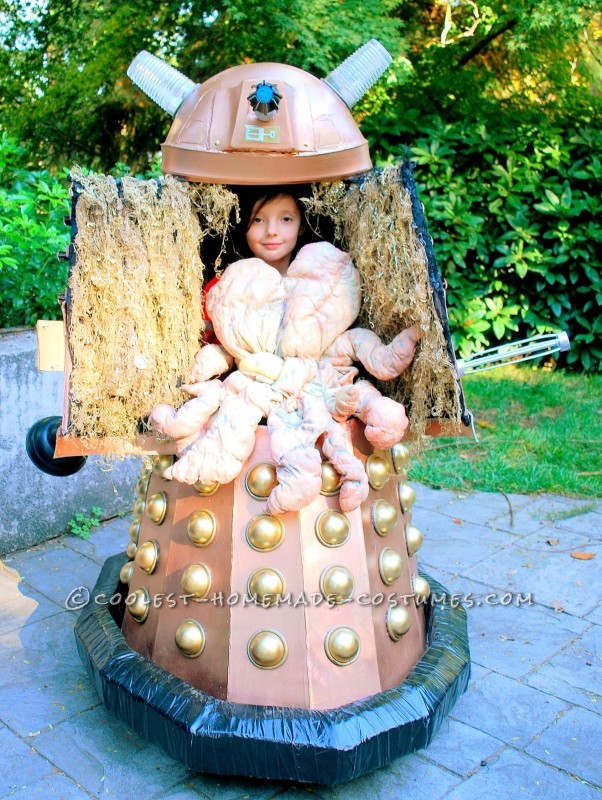 I found some Dalek plans online and tried to replicate the angles for the top and bottom supports of the skirt base.  It would have been nice to be able to cut the frames out of one solid piece of board, but I used whatever was available to work with.  After attempting to saw a crazy amount of angles and a lot of sanding, we had them fitting together…enough so that they basically resembled the shape, and were reasonably solid.  I joined the top and bottom with dowels, again, it would have been nice to have a more solid support here, but it works.  I realized that at the height I spaced them the costume was going to be way too short, so I screwed on some scrap pieces of plexiglass to make the top support higher.  We covered the skirt base with foam board pieces, cut at angles to join both the top and bottom supports.  Trying to figure out all of those angles made both my hands and brain ache! 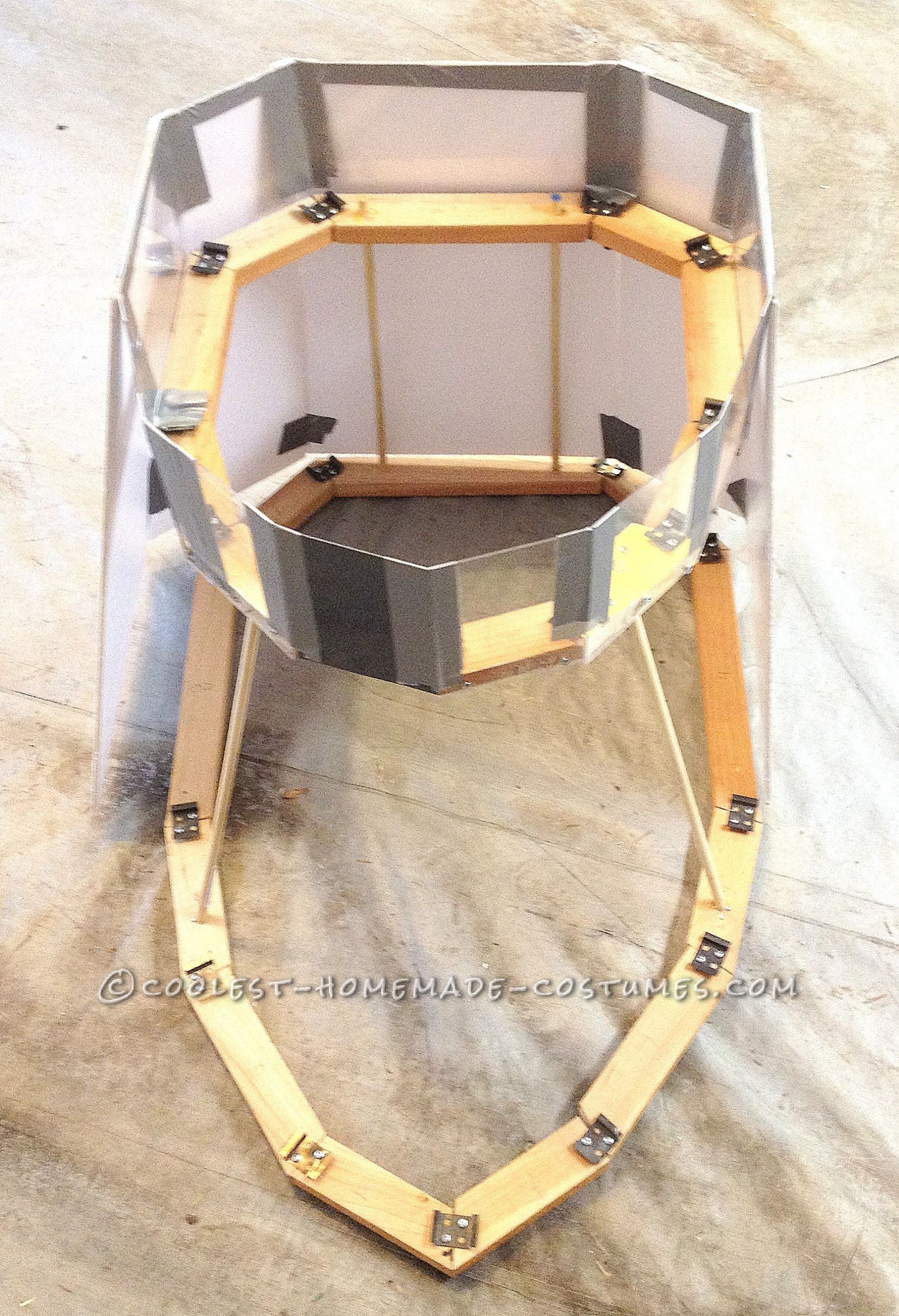 Next it was time to make the body and neck pieces.  Up until now our goal was to build a plain ol’ Dalek.  However, at this point my daughter thought it would be an even better Dalek if it opened, like Dalek Caan. …um, sure, no problem, I guess.  We joined the thin metal sheeting to the gutter covers, using lots of glue and duct tape, and wrapped them around the skirt.  I added some dowel extensions to the top of the skirt support and attached thin pvc pipes to the inside of the body/neck.  The dowels fit perfectly inside of the pipes and keep the body section in place, yet allow it to be removable.  At this point I had to cut out doors so that it would open.   Of course, the doors did not want to stay in the rounded shape so I had to build a simple frame to keep them in place.   I then reattached the doors with hinges using hot glue.  The whole thing was looking sort of flat, so I added a belt, made from some sort of flexible baseboard around the base of the body and the base of the neck section.  The rain gutter was not giving me the mesh look that I wanted, so I wrapped it with 3 layers of black screen.  The horizontal neck rings are made from a hard weather stripping, spray painted, wrapped around the neck section and hot glued into place.  I found something in the scrap bin, a half inch square long piece of … I’m not sure what, like a piece of wood but slightly more flexible, that we would paint and use as the vertical connectors between neck sections.   This seemed to work out pretty well.  OK, wow, this was really taking shape.

The arm boxes were made from scrap pieces of foam board glued into a cube shape and cut to contour the circular shape of the body.  I adorned them with pieces of poster board and cut holes into the center.  The plunger arm is made from, well, a plunger (New!) with a silver painted piece of PVC to add that extra dimension.  The whisk arm is made from a spray painted old paint roller. 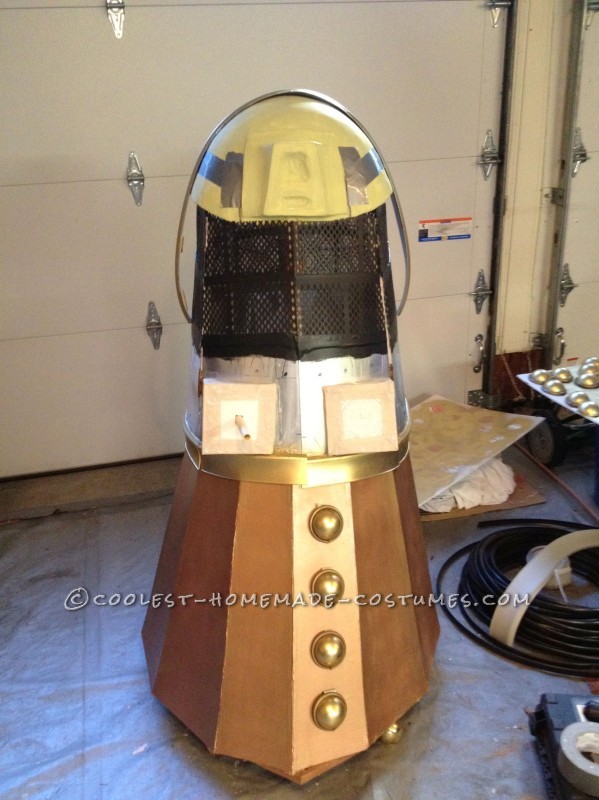 No Concept of Elegance?

I wanted the slats to have that graded angular look so I attached strips of wood shims to a piece of wood board and painted them gold.  I then attached all of the slats to the body using screws, pretty solid.   I racked my brain and searched high and low for something that would work for the half globes on the skirt section.  They had to be light and, more importantly, inexpensive.  My husband came up with the idea of using plastic play pit balls, Genius!  I cut these in half and spray painted them gold.  I wasn’t sure how to securely attach them until I found thin clear tubing.  I filled the tubing with black paint so it would have a shaded base and spray painted it with a hammered gold.  Next I sized pieces of this to wrap around the semi globes, joined with a tiny section of dowel and glued each ball section into place.  It was really becoming a Dalek now. 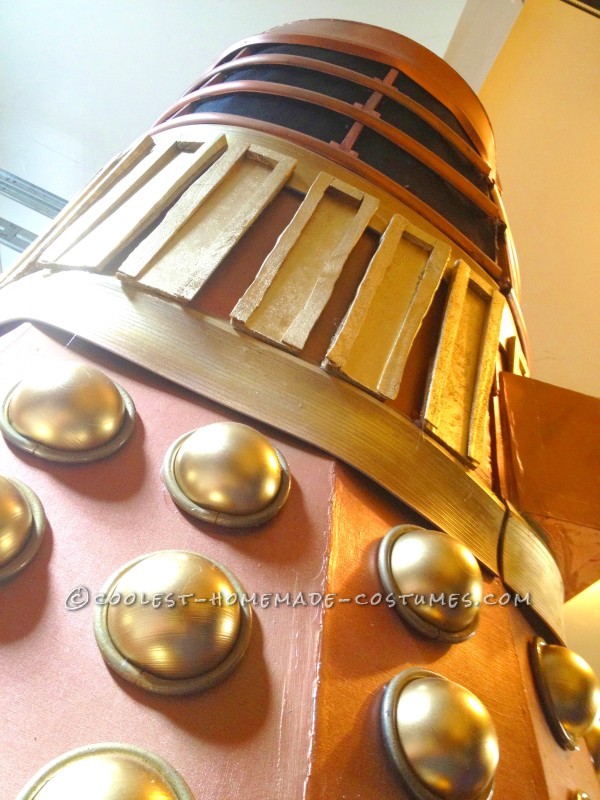 The head gave me the most trouble.  The shape of the head is somehow a mix between the base of a cone and a semi sphere. It’s a complicated shape to reproduce.  Too round and it doesn’t look right, too flat and it doesn’t look right.  I started by finding a ball that had a large enough circumference to fully cover the neck section.  Luckily, my girls had a bouncy ball that worked out perfectly.  I shaped an armor plate (cowl) for the eyestalk out of foam board, taped it to the front of the ball, covered it all with plastic wrap and began to paper mache.  After many layers, it seemed that no matter how hard I tried I could not keep the layers from being lumpy.  This would not do, as the heads are smooth.  After allowing the paper mache to fully dry I sanded it down with fine grit sandpaper and covered this with a thick layer of lightweight spackle.  The spackle itself is not very sturdy.  Any pressure and it wanted to crack.  I had to think about this…. I decided to cover it with acrylic gesso to give it strength.  I used a couple coats of this and another layer of black paint for a base.  Although it sounds like this worked out perfectly for me, it did not.  The whole head process was wrought with uncertainty.  I ended up cutting most of the head off little by little until, lo and behold, it was now too short for me to use…grrr!  I almost gave up and started over, but I had already put in hours of work on this head!  Hours of thinking later, I ended up using a piece of the flexible baseboard as the flat bottom and this really came together nicely.  At least, I was satisfied with the look.   I used a file to make the grooves and spray painted the dome.  I found some plastic cups to use as the ears and my wonderful husband, who had just gotten back from a trip to London, brought us back a Dalek eyestalk that lights up and talks in a Dalek voice!!  Yay, one less thing that I had to figure out! 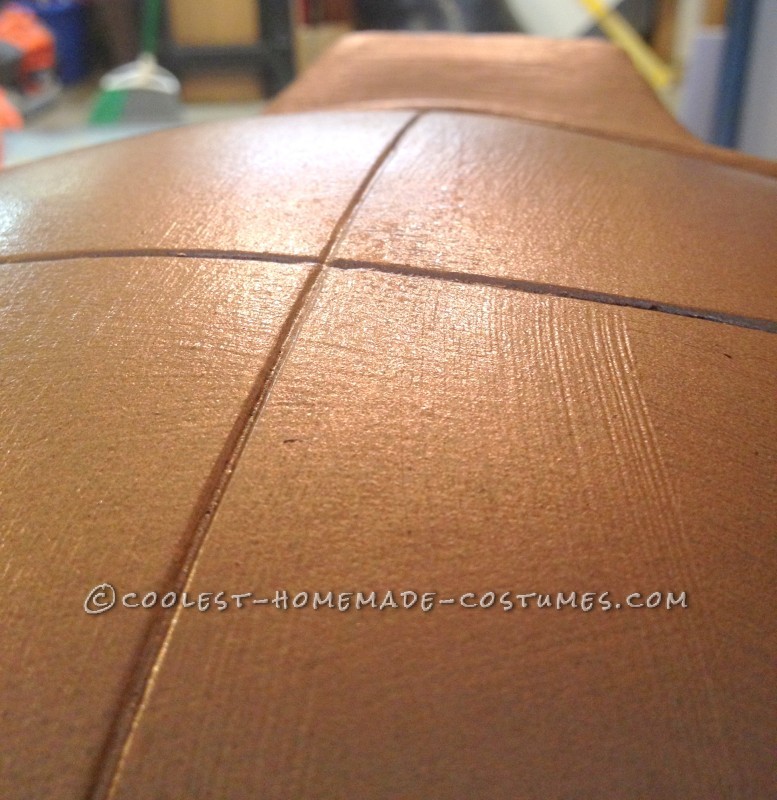 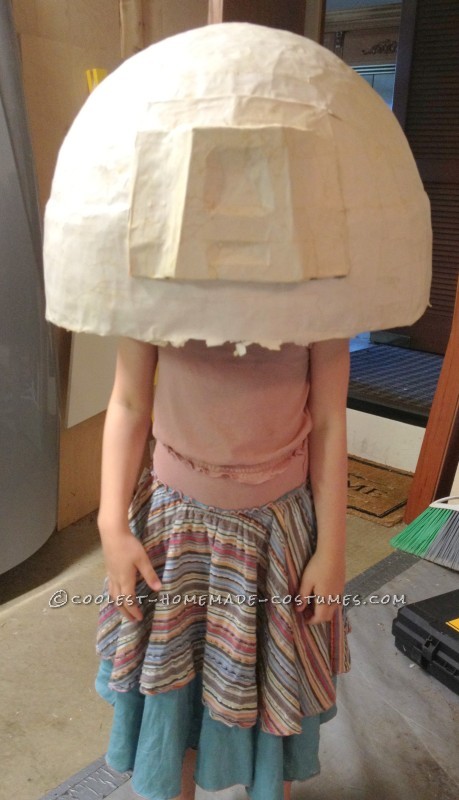 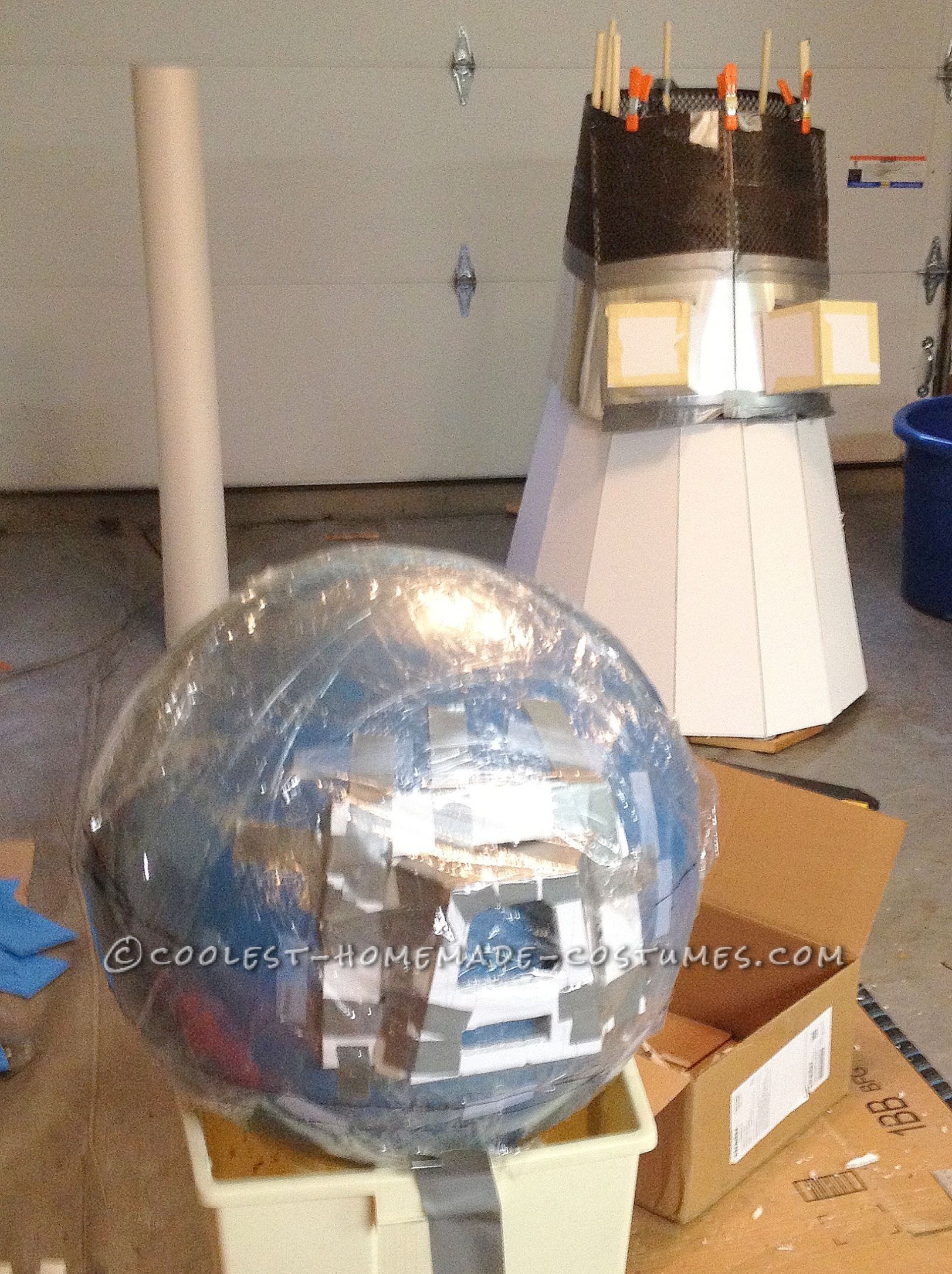 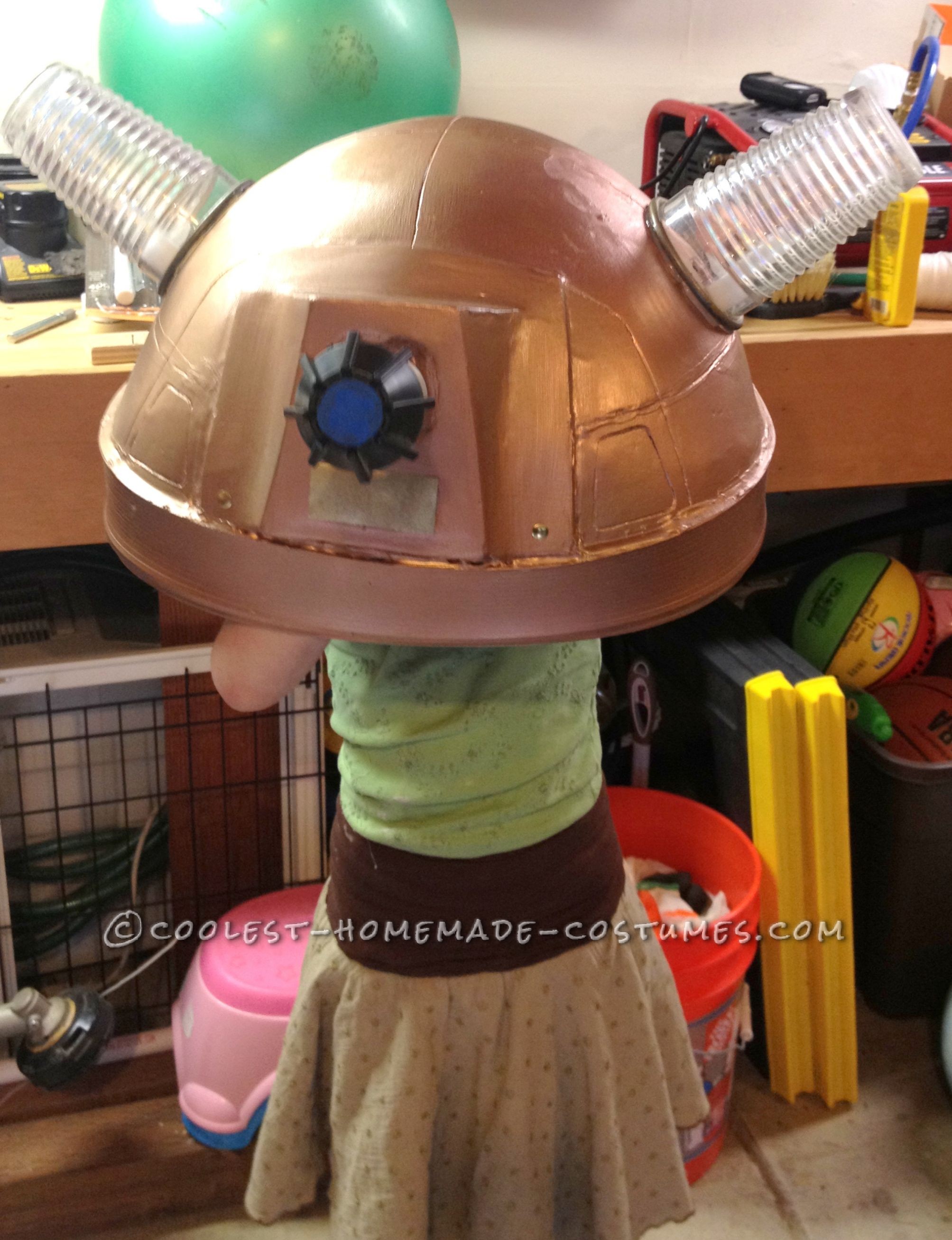 Inside the Dalek Brain

The actual Dalek brain did not give me much trouble at all.  I sewed a very crude Dalek brain shape out of white fabric and painted it in a nice gooey orangish pink.  I made sure to include one gross  bulging eye,  one tiny eye and some sort of a mouth.  I then coated the whole thing with a ton of decoupage glue and wrapped it in rubber bands so that it would dry stiff and wrinkly.  After it had completely dried I highlighted the wrinkles and folds with black paint and water and added more yellowish highlights.  This was a multi step process and I recovered it about five times in order to get the color and look that I wanted.  The color still looked flat and I realized that it did not look gooey enough.  I decided to rub it with clear silicone sealer to give it that wet look.  This is what took it from cool to Awesome!

Well, the brain couldn’t just sit in there all by itself, it had to have stringy guts.  I thought long and hard about how to get the desired look.  I knew that I could make the stringy guts with hot glue, but how do I get the glue to not stick to the paper…hmmm?  Water is what I came up with.  If I squeezed the hot glue into ice water it solidified immediately and gave me that spirally, stringy look.  Perfect!  I then lightly covered the clear glue pieces with paint and highlighted them by spray painting them gold.  I then hot glued them into place inside the Dalek.  Ooey gooey Dalek guts!

As a final note, I added the eyestalk, made a bumper using foam insulation pieces wrapped in screen and black duct tape, and even cut holes under the ears so that I could add some LED flickering lights.  I also sprayed the Dalek brain with glow in the dark paint.  This ended up making the silicone dull again, so I had to do another coat of silicone to get the wet look back.

Both our Dalek Caan and TARDIS builds took us about 3 months to complete.  I would say that the Dalek was a good 2 months + of work.  It was a fun and exciting project to work on, the girls are definitely excited and I learned a TON of new techniques.  Yes, it’s a bit overboard, but to be able to show my girls that their dreams can become a reality is, well, priceless <:-)

Post Halloween Note:  We got about three houses in to trick or treating and the girls decided to abandon their “shells”.  It took us 30 minutes to visit those three houses due to gathering large crowds after each one   My girls decided that this was not conducive to optimal candy collection.  I thought it was a great way to reduce the amount of candy collected.  They won <:-)  The TARDIS and Dalek adorned our front porch for the rest of the night.  It’s OK though, they were appreciated by the trick or treaters that came to our house.  Now where to store a 7 foot TARDIS and 5 foot Dalek…??? 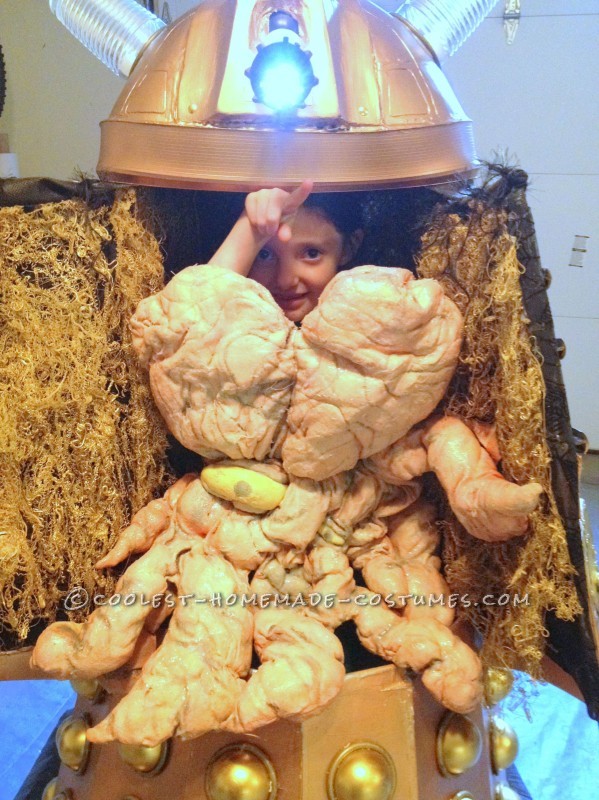 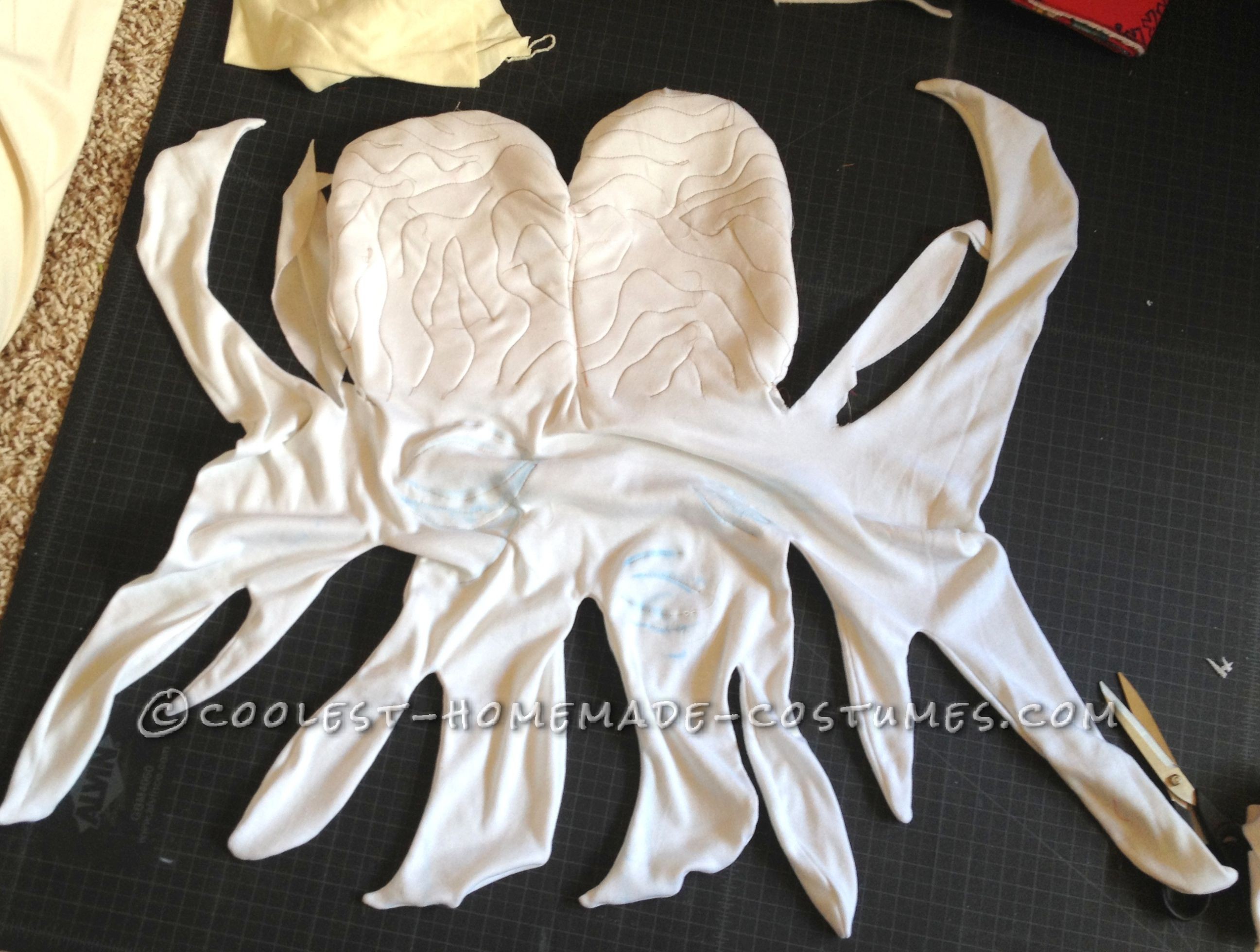 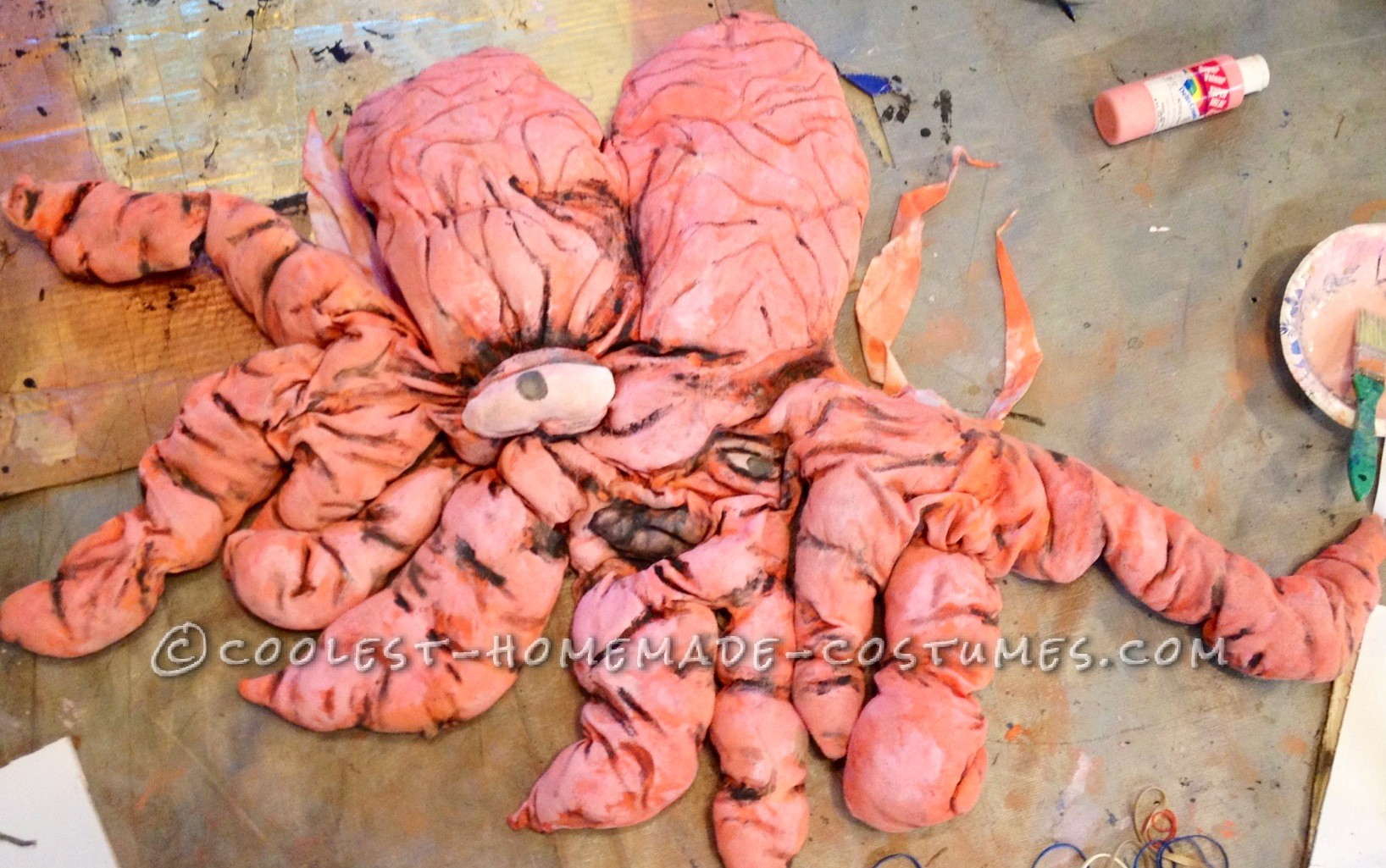 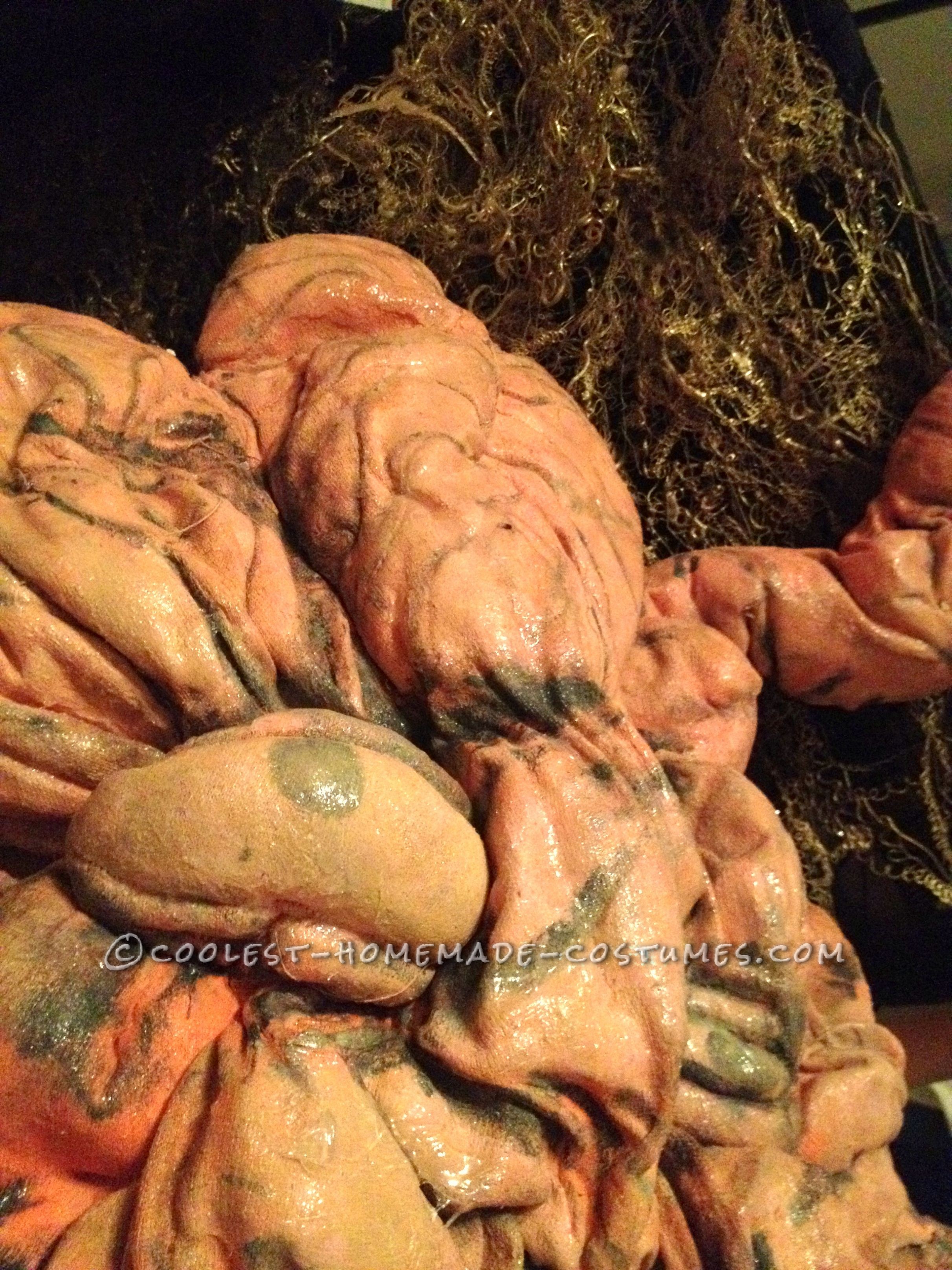 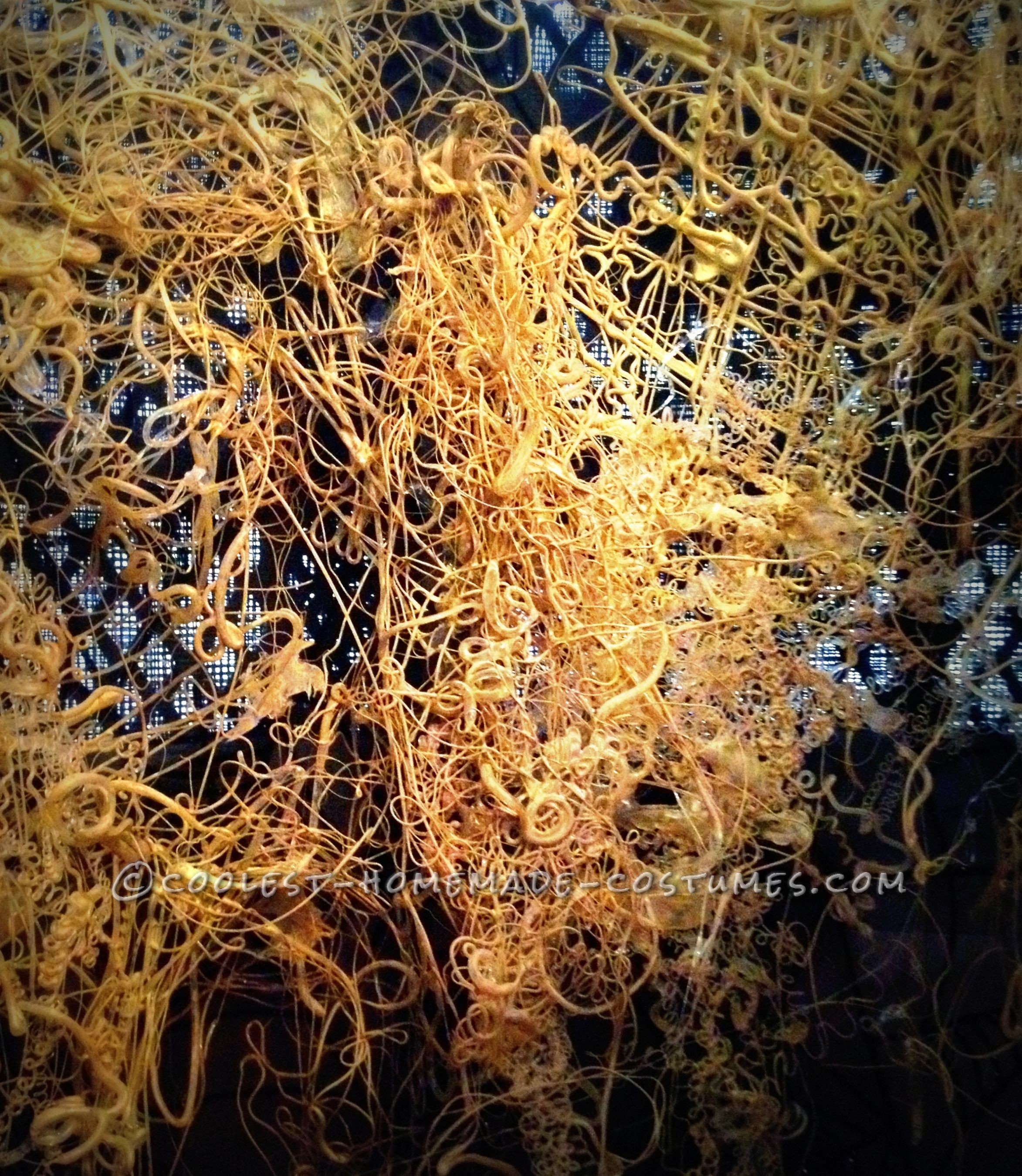